Publisher’s Note:  ZG has undergone a major overhaul to improve functionality and make it more bulletproof for the coming Endarkenment. The sites are now live after much work by the system administrator, KC. In other matters, I am writing a novel and preparing for PorcFest XI where I will be giving three speeches and a half day seminar in NH in June.

I would love to meet some my friends and contributors there. -BB 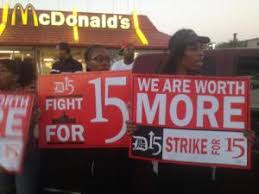 Recently, a group of McDonald’s employees have taken to the streets to protest their admittedly poor wage. Now, there are both reasons why their wage is poor and ways to increase it. The ways to increase the wages, however, will either be bad news for McDonald’s workers or businesses everywhere.

But first for the reasons. Why are the McDonald’s workers paid such low wages and really fast food workers everywhere? Well, there are a number of reasons. First of all, there is an immense labor market for the workers at fast food restaurants. It is a low-skill job that can be completed by virtually every able-bodied person. That means that there is little need for the companies to make their job competitive. There is far too much supply for the wage to be high. Notice how the higher skill a job requires, the less people there are to hire for it, and how the wages are generally higher for these jobs. Another major reason is a lesson in economics to anybody who doesn’t have much of an understanding. Wages are not arbitrarily set, including the minimum wage (although minimum wage is not set for the same reason that wages are in a market). Wages, particularly hourly wages, are set in such a way that employees are paid by their predicted worth to the company. This idea is not infallible considering you cannot reduce labor to a variable I’ll refer to as a “unit of labor” (as it has been referred to by at least Keynes and likely other economists). Individuals are going to differ in their productivity. However, this is generally how wages are determined in any market. If you were to do the math, in 2013 McDonald’s employed about 1.8 Million people and made about 28.11 Billion USD in sales/revenue. That means, that each unit of labor would be responsible for 16,000 USD (rounded up) in sales/revenue. This number will be important later so keep it in mind.

Now, there are two ways in which the wages of these people can be raised. The first is to reduce the possible labor market. That would mean that McDonald’s would hire less people of greater skill. This, however, does not guarantee higher wages especially in areas of recession where a job will be taken even if the wage is poor. Another possible route would be to further automation so that the labor would have to be more skilled so that they can handle the technology. This, again, is not a guarantee but is more likely than the first scenario to produce higher wages. Another option, that is dangerous, is to force the company to pay higher wages through unions and legislation. This is dangerous because it further changes the scale of value for labor. As it stands, a person working at American minimum wage would make (assuming full time every week for every week of the year which of course doesn’t happen) $15,000 in a year (rounded down). Notice how this number is very close to the amount of revenue per employee. A raise to $15/hour work under the same circumstances as the prior calculation would mean that the employee would make $31,000 (rounded down) in a year. This is almost double their expected productivity. This is not a good for a market. Such a policy would obviously favor the very large industries that are capable of paying the costs even though it deeply cuts into their yearly sales/revenue.

2 thoughts on “McDonalds and the Minimum Wage by Jacob Bowen”