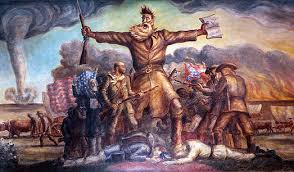 “All men dream but not equally.  Those that dream by night in the dusty recesses of their minds wake in the day to find that is was vanity; but the dreamers of the day are dangerous men, for they may act their dream with open eyes to make it possible.”

I maintain a catalog of inspirational speeches and they speak to me like the epochal union of literature in music and literature in opera or the powerful poems that set fire to our hearts. I love great speeches and have a collection of some of my favorites whether Shakespeare’s Henry V homage to the “band of brothers” or Charlie Chaplain’s speech or Churchill’s magisterial speech condemning the Amritsar massacre in India in 1919 which may very well have paved the way tangentially for the liberation of Eire from the English manacle in 1922. It may have been Churchill’s most masterful speech.

John Brown’s short but powerful and poignant speech is one of the finest in English letters and helped to set the world on fire in the worst way when instead of liberating the slave, the Lincolnian war on Southern secession put every human in the tax jurisdiction known as the USA in shackles that have grown heavier and more oppressive by the decade since. I don’t hold John Brown personally accountable for the tragic conflict from 1861-65 in the USA. Like all history, the causes and effects and the eddying concourses from many sources that joined to effect those very things make a complex tapestry especially in retrospect and professional hindsight.

John Brown fought a fundamentally different fight from the abolitionist campaigns of the likes of Garrison and Douglass. John Brown took a violent fight to an evil so great in his mind that all his campaigns against the slave power were justified. He was that most dangerous man that TE Lawrence spoke of: a visionary who dreamed during the day. Hence, the following speech by John Brown at his trial before he was hanged. Brown was the kind of man you simply don’t find in humanity today. Many would applaud his absence but I would think more men like Brown would inspire the changes that need to be made now. Brown was neither a military genius nor a competent rabble-rouser who could inspire others to follow his lead and actually spark the change.

In the modern American landscape, the prison state is here and firmly entrenched. The servitude in America is ingeniously dressed as freedom when in stark Orwellian terms, it is a nation where everyone excepting the outlaw is a vassal and employee of the enormous Federal state that lords and rules from the former swamp in DC. Brown faced a similar evil before the War of Northern Aggression, a nation North and South that lived in a Constitutional steel cage that codified slavery and in 1850 established the fugitive slave law to put the full faith and credit of the US government behind the ownership of other human beings in perpetual chattel slavery.

Brown weaponized ideas and knew that voting at the ballot box would not free the four million men, women and children in chains; the bottom-most rung of chains in the increasing web of control and corruption that emanated from DC. Brown did in a few months what decades of abolitionist scribbling did not attain. He brought the entire question to a head in living technicolor fully animated by his Old Testament sensibilities.

A proper condemnation of Lincoln is well outside the scope of this essay and many others in the commentariat have dealt with that malevolent and murderous specter that haunts America to this day. 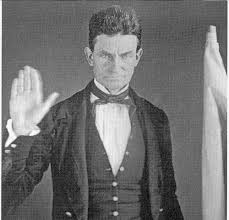 In the first place, I deny everything but what I have all along admitted, the design on my part to free the slaves. I intended certainly to have made a clean thing of that matter, as I did last winter, when I went into Missouri and there took slaves without the snapping of a gun on either side, moved them through the country, and finally left them in Canada. I designed to have done the same thing again, on a larger scale. That was all I intended. I never did intend murder, or treason, or the destruction of property, or to excite or incite slaves to rebellion, or to make insurrection.

I have another objection; and that is, it is unjust that I should suffer such a penalty. Had I interfered in the manner which I admit, and which I admit has been fairly proved (for I admire the truthfulness and candor of the greater portion of the witnesses who have testified in this case), had I so interfered in behalf of the rich, the powerful, the intelligent, the so-called great, or in behalf of any of their friends, either father, mother, brother, sister, wife, or children, or any of that class, and suffered and sacrificed what I have in this interference, it would have been all right; and every man in this court would have deemed it an act worthy of reward rather than punishment.

This court acknowledges, as I suppose, the validity of the law of God. I see a book kissed here which I suppose to be the Bible, or at least the New Testament. That teaches me that all things whatsoever I would that men should do to me, I should do even so to them. It teaches me, further, to “remember them that are in bonds, as bound with them.” I endeavored to act up to that instruction. I say, I am yet too young to understand that God is any respecter of persons. I believe that to have interfered as I have done as I have always freely admitted I have done in behalf of His despised poor, was not wrong, but right. Now, if it is deemed necessary that I should forfeit my life for the furtherance of the ends of justice, and mingle my blood further with the blood of my children and with the blood of millions in this slave country whose rights are disregarded by wicked, cruel, and unjust enactments, I submit; so let it be done!

Let me say one word further.

I feel entirely satisfied with the treatment I have received on my trial. Considering all the circumstances. it has been more generous than I expected. But I feel no consciousness of guilt. I have stated from the first what was my intention and what was not. I never had any design against the life of any person, nor any disposition to commit treason, or excite slaves to rebel, or make any general insurrection. I never encouraged any man to do so, but always discouraged any idea of that kind.

Let me say, also, a word in regard to the statements made by some of those connected with me. I hear it has been stated by some of them that I have induced them to join me. But the contrary is true. I do not say this to injure them, but as regretting their weakness. There is not one of them but joined me of his own accord, and the greater part of them at their own expense. A number of them I never saw, and never had a word of conversation with, till the day they came to me; and that was for the purpose I have stated.

Now I am done.

Orson Welles recitation of the speech is masterful and knows no peer short of witnessing John Brown himself.

I am not a religionist so his appeals to higher power in the supernatural coil leave me underwhelmed but his conviction did not simply come from his religion. His notions of right and wrong were animated by everything he saw around him in his country. The comfort of watching an entire people chained and controlled like livestock had been taken for granted by everyone not in those conditions; they knew that change was difficult and would come with inconvenience and the burden of having to work a little harder to look in the mirror and question the image staring back at them.

John Brown looked in the mirror and came up with an answer that led to his trial and his death. He sought an immoral means to bring about a just end and paid the price.

He would no longer take the easy wrong over the hard right. He would no longer bow to the power of might makes right nor to brook the shabby rationalizations of a political document whose coup in 1791 localized the tyranny the colonials originally fought the UK for eight years to unshackle themselves from. Brown knew that pacifism was nothing more than an elegant slow-roll self-extinction event. Brown had internalized the violence that was chattel slavery and decided that action would trump the decades of writing and speeches that Garrison and others had labored under.

John Brown wagered his life and lost but he was not overseas murdering the inhabitants of a foreign land that had crossed the geopolitical machinations of a cowardly ruling class or a criminal predator plying his malum in se trade in the night. Brown was not an over-fed badged statist predator protecting and serving good and hard the unwitting population that expected better treatment. Brown fought a war on his own soil to right his perceived wrong.

John Brown made his peace and started his war. America would never be the same. His death would animate the conversion of many pacifist abolitionists into something different.

2 thoughts on “John Brown Gets His Gun by Bill Buppert”