Publisher’s Note:  Memorial Day is another fabricated holiday to remember the exact opposite of what the day should represent. This is the day that should inspire millions to march on DC and every other satellite occupation facility throughout the USSA with tar, feathers, pitchforks and righteous indignation and threaten the rulers with the exact same empty promise they give to veterans and the other willing. The recent revelations of ineptitude and incompetence at the Veteran’s Administration that manifests in every corner of the world that the government touches should be the signal flare that makes everyone take pause. DC won’t fix the VA but it will pile the maimed and wrecked human cord-wood that return form the nasty imperial project planet-wide and shove them into institutions that will most likely kill and subject them to slow death.

Like Veteran’s Day it celebrates the specious and imbecilic argument that the American war on the world will ensure a more stable existence and place on the globe for American when it does just the opposite and lulls the American sheeple to smile benignly on the death machine that is the Department of Defense. But then again all politics is a death cult and this is merely another manifestation.

Travis is a rare and signal writing talent whose contribution today bring terrific illumination to the twisted and wicked legend the state has shrouded institutionalized killing and slaughter in. 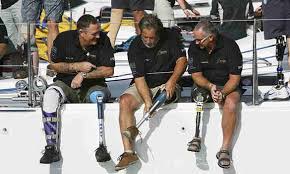 Stop praising veterans for maiming and killing millions who have never lifted a finger against the USSA,;Memorial day is here again. A day set aside by the government to acknowledge all the troops who have died in service to the government, to remember their sacrifice to uphold the want of the expanding empire and to ensure domestic tyranny is broadcast internationally. A day to recognize those that protected opium fields in Afghanistan, oil fields in Iraq and Kuwait, who intervened in matters not involving them. A day to yell “support our Troops, just don’t allow them to come home!” This is a day that people get their panties wet for the stars and stripes and all of the men and women, sometimes children that have been killed in duty to the Government of the United States. That sounds a bit harsh doesn’t it? Think about it though, is it true? Do these service members serve you, or do they serve the government? When was the last time your orders to the “Nation’s Service Members” was answered?

Smedley Butler, one of the most decorated US Marines penned this essay “War is a Racket”.

“WAR is a racket. It always has been.

A racket is best described, I believe, as something that is not what it seems to the majority of the people. Only a small “inside” group knows what it is about. It is conducted for the benefit of the very few, at the expense of the very many. Out of war a few people make huge fortunes.

In the World War,] a mere handful garnered the profits of the conflict. At least 21,000 new millionaires and billionaires were made in the United States during the World War. That many admitted their huge blood gains in their income tax returns. How many other war millionaires falsified their tax returns no one knows.

Butler saw this after his years in service and this was written as a warning leading up to World War 2. He saw that through war peace is not ventured towards but thrust aside like a broken toy by a child. Butler wrote his feelings of despair for this nation and all others so conceived to annihilate others for the interest of the governments in control. “So…I say, TO HELL WITH WAR!

There are a lot of reasons people adore this day. Maybe a family member or friend died in the struggles of war, maybe a person lost friends, brothers, or even their own sanity, fighting for a lie, deceit and ultimately what was never to be had.  I have always questioned the motives of soldiers. you would ultimately have to agree with the ways in which the system works to be a part of it, in any capacity.  Why have you resigned your self to die or to kill based on any amount of information? Why have you sign away not only your life but every right to your own body? Why have you allowed a few people who call themselves your government dictate what you will do, who is your enemy, who is allowed to live and who must die? Why have you let your mind be deceived to belief the great lie that stifles peace and breeds more war?

I say we have forgotten. And damned if anyone is willing to stop and think, maybe the way to peace isn’t in dropping bombs, it isn’t in destroying villages halfway around the world but by working towards peaceful ends to mutual problems. I am called idealistic, Utopian, a dreamer to think that people in other lands would be interested in peace with us. Well no, I don’t suppose after generation after generation has grown to be controlled by this country, threatened and harmed by this country they would very much like to resolve to peace, it is the bed our government and their strong-armed subservient drones have made for the rest of us to lie in along side them.

This day is set aside to remember those who have died in duty to their government. But what do we do to remember those that have died because of our government soldiers. What of the Vietnamese villagers killed at the hands of our troops? What of the Syrians, the Kuwaitis, the Iraqis, Koreans, what of all those killed by policies set by our government and enforced by their troops? Have you ever set to think about those who have paid the ultimate sacrifice for those that claim to pay a sacrifice? It is the subjective value of life that is a real hurdle for some to get over? The ability for some to value the life of one person over that of another and to justify their death in relation to some unknown and unseen meter of safety in on country over another. In all instances life is lost, it is the real test of a personal philosophy to drop this hypocritical value of life.

Lest We Never Learn A Lesson

What will this nation and all other nations be if they never learn form the horrors of war?  What is to become of children brought up in a perpetual state of hate for foreigners? What is to be said of the eternal conflict between lands, waging battle after battle until but a few peoples remain to be enslaved by the larger of surviving regimes? What if we never learn our lesson?

If you want to remember the troops, bring them home. Shut down the military industrial complex, shut down the 300 bases in 190 countries, stop fueling future conflicts with hate for prior ones, stop sending men to kill and die for a corrupt government and stop trying to impose a tyrannical empire over the world for the blood lust of those who claim superiority and control.