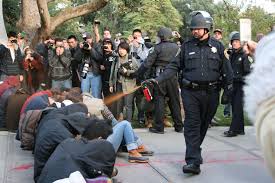 “The state calls its own violence ‘law,’ but that of the individual ‘crime’.”

The state is driven by the notion that it can commit immoral acts to achieve moral ends. Absent terroristic styles of governance, it has no authority to exact the shaping of society it desires. Terrorism is the politically motivated threat or use of violence against innocents and non-combatants.

The government practices this in wartime and in times of peace. The basis of all forms of anything other than self-governance in shaping society by the state involves institutions of violence most moral human beings would find repugnant. Most decent men and women would no more beat a man into submission or shoot a dog in fear for their lives absent the very protection the political classes and their praetorians enjoys as special prerogatives. The causal everyday violence of statist employees whether armed or not is apparent everyday whether in your own personal encounters to the flood of news reports that show that the police are simply not in the business of being moral beings but wholly owned subsidiaries of evil political will.

I have written extensively on police violence and just finished a five part series on the growing murder culture of American policing and the tidal wave of reports substantiating the militaristic and occupation trend of cop behavior in America is well documented.

The US is an occupied nation by an alien totalitarian culture emanating from DC and its subsidiary political apparatchiks throughout the docile state units of the massive government parked in North America. The usual suspects in the media and the house totalitarian organs like the Washington Post and New York Times go out of their way to justify the enormous surge in police and government violence throughout the land.

“One would be hard-pressed to find one of the badged waddlers not retreating to the “following orders” shtick so chic among the constabulary in America. Much like patriotism is the last refuge of the scoundrel, the excuse of simply following orders is the last refuge of the human refuse acting as police officers throughout America. They also enjoy snickering that they only enforce the law and don’t make it therefore excusing themselves from any moral judgment in executing immoral laws.

We see this with the disgusting displays of the police illiterati in Connecticut who boldly declare that they will enforce what their political rulers dictate instead of using common sense or a compass of decency. If you want a true measure of the mindset of modern American policing, just go the comments section at Police One in the news section and you will see the natural depravity that seems be the mind of the traditional cop community in the new America.

William Grigg has done a splendid job of articulating just how pervasive the corruption and brutality of American policing is.

According to their logic, the modern cop would swiftly uphold the rogue’s gallery of outrageous law that has polluted the American landscape since it founding to include the 1850 Fugitive Slave Law, the Dred v. Scott decision, the era of Prohibition against alcohol, the horrific and Greek tragedy of American drug enforcement and huge privations and deprivations suffered by Americans during the many US wars on the world. Check out the Lincolnian horrors enforced by big city policing during the American Civil War or the Soviet-style tactics of the American Protective League during WWI. It simply get worse in the intervening period and the dawn of the terrorist war of the world has simply metastasized the cancer of policing in the US.

If one looks at the shameful treatment of the abolitionist dissenters in American society during the 19th century, all the roots of modern American tyranny seem to have ancient seedlings.

Erase every police procedural television show you have seen and dismiss all the movies lionizing the cops as the last bulwark between the barbarian and civilization. Every time you turn on the television and see the latest news involving the police mauling or killing yet another human being in the country, presstitutes immediately start to fellate the state and offer any apologies they can for the animal behavior perpetrated by the authorities on a daily basis. Conduct the thought experiment of substituting the word police with neighbor and see if the same rationale for decent human beings stands the test. Most likely it won’t.

The police are the barbarians and are the arbiter of the brute force that is the whole equation of American governance from Mordor on the Potomac.

Police insist that you do things they simply don’t have to obey or comply with whether it is maiming and injuring your friend, family or neighbor or shooting a dog because they felt threatened.

Officer safety is nothing more than sophisticated excuse to maim or murder other human beings with no more pretext than you felt nervous or threatened.

“Officer safety is the reminder that government officials are more equal than others.  All professions come with risks but the police are a special case because without their warrant for the use and initiation of force against others, our government and governments around the world would collapse because citizens would be able to ignore malum prohibitum laws with impunity.  Civil disobedience would have a real effect and non-compliance, a peaceful endeavor, could not be stopped with bloody violence.”

Much like the bad laws mentioned earlier, the cops are there to enforce the worst whims of the rulers from the nonsensical economic serial illiteracy of the three letter agencies and their charters for making the human condition miserable and to fine, kidnap, cage, maim or kill the citizens depending on their level of resistance in the country with the highest per capita prison population on Earth.

They are not Joe Friday or Barney Fife, they are the legions of overweight bullyboys laughing at the mayhem they wreak and the thugscrums that prey on animals, children, women and the elderly and disabled in addition to the tremendous number of men assaulted and some killed by the thin black and blue line. This essay does not even touch on the hidden islands of depravity and misery that is the mendacious gulag system in America.

You cannot kidnap your friends and neighbors, stuff them into a car and steal them from their loved ones.

You cannot drag your friends and neighbors before a robed government employee and be sentenced to a random cage to spend the time the aforementioned employee judges to be correct.

You cannot storm into your friends and neighbor’s house, ransack and destroy and simply leave with no recompense nor restitution.

You cannot storm a house, murder whoever you wish and make your friends and neighbors pay for your mistake for millions of dollars.

You cannot authorize straw purchase contraband or stolen goods and help the buyers pay for it and call it justice or sensible in any way.

You don’t intimidate, lie and distort to get your way.

The police can and do everyday a s a matter of course..

You will not use immoral means and achieve moral ends in any advancement of civilization and society.

The police think they can.

There is no greater existential threat to human liberty anywhere on Earth more severe and or imminent than the militarized cop phenomenon metastasizing in America.

They will not stop until their very lives and livelihood are put in such an extreme hazard that they have no further incentive to do harm.

The cops are the enforcers of the political ruler and nothing more nor less. They are the meat puppets of government thuggery.

There is an ill wind blowing.

“Every actual state is corrupt. Good men must not obey the laws too well.” 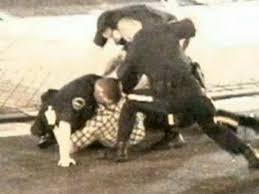 4 thoughts on “Police [Brutality]: A Crime Against Civilization by Bill Buppert”