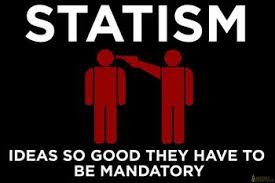 “The tragedy of modern war is that the young men die fighting each other – instead of their real enemies back home in the capitals.”

Question obedience and not authority, the rest will follow. As individual human beings, we come into the world naked and leave on a slab or in a coffee can in the same condition barring what was in the mind, heart and soul at the conclusion of the life lived. Volumes of books have been written on the life worth living and millions of solutions offered to live the good life or the examined life or the other life on and on. Some use philosophical or religious justification for their achievement or sloth.

Unfortunately, the world is filled with far more shirkers than workers and consistent misidentification and conflation of activity with productive work.

We live in a world dominated by a government supremacist mindset that impoverishes the imagination of the poor and elites alike. A world where the human has become so cowed by law, star stuck by regulation and strangled by taxation, it appears forward progress to the promise of our youth is stunted and nigh impossible.

Look around you. Are you acquainted with grown men who spend all their non-work (or is it activity?) hours in a masturbatory dalliance with electronic friends in an insipid game or bathed in the ghost-light of the glass teat for six or more hours every day? Do you have friends or family whose fascination with a sport or sports team is so morbid they cannot talk of anything else? Are friends or neighbors who can barely get out of their own way in a race to exceed their height by their girth through indiscipline, gluttony and simply bad eating decisions in your social circle?

Please remember that the men of today are nothing like the men of yesteryear. One can find modern conveniences and advancements in science and engineering to make for a marvelous new civilization. Right now, no other generation in the entire planetary history of humanity has more information been available horizontally and vertically at the disposal of every person alive. Ever.

And what do we do? Tens of millions are addicted to passing on important information about their bowel movements, sex lives and eating habits via every manner of social media.

During the Siege of Boston in 1775-76 the British were astonished at the speed and perseverance of the colonists erecting the defenses against the Regular incursion in the area following the unpleasantness at Lexington and Concord in April 1775.

“General Gage wrote of his surprise of the number of rebels surrounding the city: “The rebels are not the despicable rabble too many have supposed them to be…. In all their wars against the French they never showed such conduct, attention, and perseverance as they do now.”

The British writer, Harvey, is no apologist for the American based narrative so prevalent in the government schools in the US yet he cannot help but be astonished by the work ethic of a colony for whom heavy physical lifting for twelve hour days six and a half days a week was the usual course of the day. You will find many in the commentariat here suggesting that we no longer have the guts and perseverance that animated so much of the false glory assigned to the Greatest Generation during the War to Save Josef Stalin (1939-45).  WWII did, indeed, make the world safe for communism and the eventual evolution of the US and Europe into the national security prison states they are proud to be today.

All of this adds up to a world where unquestioning obedience, fealty to a secular godhead in the state and the willingness to war against planetary neighbors at the shrill call of a government kazoo is the best and brightest we are capable of?

So the Marxoid, left-collectivist hippies of the 1960 fancied themselves rebels by touting the notion of peace signs and questioning authority. What they really wanted was to ensure that the creation of the maximum state in the West would proceed apace while giving the most turgid and vicious subservience to screeds justifying communism and every other noxious type of -ism to enslave humanity would continue.

So it makes sense that they would vouchsafe questioning authority as the means to liberate mankind while they continued the long march through all the Western cultural institutions to insinuate a totalitarian impulse so strong they wrapped the flag in it and convinced even unionists and cops that they were conservative torchbearers (I would suggest that all cops are simply deluded rabid leftists, why else would they be so fond of the Nuremberg defense for their outrageous behavior). It was all eyewash to conceal the true intentions. Actually, the only signal they championed was a total conversion to a fervent collectivist impulse that would make the government a living god and every cop an armed agent for leviathan at every turn.

Questioning authority demands an abstract exercise where one can bemoan the circumstances of their enslavement without being asked nor expected to do anything about it. Much like the universal discomfort with high taxes in the US people take no action, except in the rare cases where thought and action nicely merge and a man crashes a plane into an IRS building.

That pilot, Andrew Stack III, did not stop at questioning authority; he actually took the next (or previous?) logical step, which is to question one’s own obedience to the very authority questioned. Not all disobedience must employ violence since many revolutions have been won without resorting to initiated violence.When one examines the sordid track record of America “justice”, I am constantly surprised at the rare occurrence of a Stark or Dorner on the American stage.

And please don’t buy into the idiotic neoconservative drivel on suicide and homicide bombing in the Middle East coming out of the usual academic drones and media talking heads. It is not about drugs or religious fervor; it is about indigenous populations fighting occupying forces. That simple.

Pape: “From Lebanon to Israel, to Sri Lanka, to Kashmir, to Chechnya — every suicide terrorist campaign since 1980 had as its main goal to establish or maintain self-determination for territory that the terrorists prize. Religion is rarely the root cause although religion is often used as a tool by terrorist organizations to serve the broader strategic objective.”

Stark took the same step Michael Collins took in 1920 in Ireland and Gandhi took in his long campaign to get the British out of India. The same step that the original thirteen colonies took in 1775 and the Southern states took in 1860. This catches a mere two hundred snapshot in thousands of years of men putting their back into questioning obedience at the most fundamental level.

All of the madness associated with government supremacism, the leviathan state and the creepy twenty-first century terror state posing as democracy in the West could be brought down with the simple notion of refusing cooperation.

Freedom cannot exist if an opt-out of the system is unavailable. It makes no logical sense whatsoever that one can assume you are free unless you can opt out or choose not to participate in those activities you as an individual find objectionable or untenable from a freedom perspective. A man is a slave otherwise no matter how fanciful or exigent the explanation for the denial or abridgement of individual liberty.

So, in the end, we can question authority as an academic exercise as often as you wish but it does not amount to much. The only way to weaponize questioning authority is to question obedience and act on it.

Your obedience to injustice and the leviathan state is a measure of your own moral cowardice and all of us have enough of that to contend with much less the enormous compliance pressures on us every day.

There is only one reason your children will be no better off than you, more indebted (regardless of lack of consent, go figure), more highly taxed and grossly regulated. That reason is the fault of every generation that does nothing to include the one that looks back at you in the mirror every day.

Question obedience and act, that is where the real revolution begins.

“War will exist until that distant day when the conscientious objector enjoys the same reputation and prestige that the warrior does today.”

15 thoughts on “Question Obedience AND Authority by Bill Buppert”