The pillars of the abolitionist community in the US and the world are deceptively simple and not much different from the anarcho-capitalist community with minor variations. The philosophical precepts do not require the enormous gyrations, intellectual sleight-of-hand and economic illiteracy that seems necessary to justify the collectivist regimes ranging from communism to socialism to democracy. One of the reasons for the relative simplicity is the necessity to provide a description of effective individual human action at the most atomistic level with an eye to self-interest and long-term return on behavior.

The Larken Rose Laws are even more compelling in a more visceral and less legalistic perspective.  One of my colleagues, John, broke it down to this elegant but powerful list summary:

I would suggest that Larken Rose is the most effective and potent voice for freedom in America today. The first list is more prescriptive of how the abolitionist society that forbids all slavery in all its permutations is operative while the Rose List describes the necessary embryonic conditions that force the function to follow. He delineates in sparkling simplicity the conditions that precede the liberation of all humanity from the fetters of the state.

Unlike the thousands of meters of shelf-space devoted to rationalizations of state power over the individual straining the weight capacity of law school library and law firm shelves alike, there is no proposal to allow the worst of humanity to devise and erect complex systems of shackles and punishment that herd humanity into totalitarian statist cage farms known as nation-states.  The standard riposte is that the state must exist to protect the existing herd from predatory elements of society whose criminality is usually measured in a lack of compliance to thousands of laws vomited forth by elected (self or plebiscite) officials. In other words, one puts the worst in charge to protect some from bad actors and the whole of the society is subject to usually kleptocratic and murderous whims of the anointed political class. The “protection racket” then demands a larger and larger slice of the potential victims’ time and resources dragooned through taxation and regulation to protect the bloated and intellectually stunted bureaucracies that are created to meet crisis after government germinated crisis; a perpetual motion machine for tyranny, cruelty and economic efficiency that knows no peer.

I had a conversation with a self-proclaimed socialist the other evening and was absolutely amazed at the lack of depth and almost religious idolatry for the power of the state to keep society afloat. At one point, I had to interject that my primary objection to socialism and all the other collectivist pathologies plaguing humanity is the consistent advocacy for violence as the primary building block of society from the use of policing to cage farms for miscreants to the export of mass murder in warfare. The entire foundation of the collectivist society is based not on cooperation and persuasion the threat and use of sheer bloody violence. If that is the prime mover for a healthy collectivist society, why would anyone be surprised when the persecution, caging filling and corpse stacking begins with a vengeance.

Liberalism is not a mental disorder, collectivism is a mental disorder. It is the creed of the sociopath and the psychopath who wishes to form societies not around peace but war, not around voluntary exchange and a respect for opting out but a vicious herd-like mentality that prizes obedience above virtue and conformity over individual thought.

Don’t be fooled by the academic charlatans like Noam Chomsky who claim the mantle of anarchism yet find National Socialist healthcare schemes perfectly compatible with anarchist society. For them, anarchism is sexy in small doses but should never be taken to the logical extreme of objecting to their pet projects and schemes to enslave their fellow man.

Slavery is wrong any way you justify and that is the simplest objection of all to any statist scheme no matter how innocuous or benign it may appear at first. If you refuse to acknowledge your own self-ownership, fine but please be kind enough not to presume to surrender your neighbor’s by proxy. 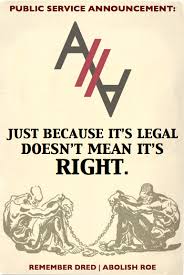