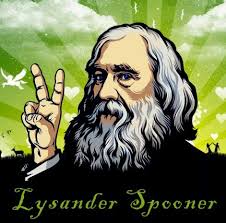 Publisher’s Note: I am presently on recce in the Deep Pacific exploring the expat opportunities for leaving the USSA since my return from Afghanistan and will return to Amerika briefly before settling our affairs and departing for a much longer sojourn abroad. My posts will be even more sparse than usual. –BB

“But whether the Constitution really be one thing, or another, this much is certain – that it has either authorized such a government as we have had, or has been powerless to prevent it. In either case, it is unfit to exist.”

I am probably one of the only humans on Earth to be reading all 2400 pages of Spooner’s six volumes of complete writings and I have yet to find anything I fundamentally disagree with yet he is the exception rather than the rule in any discussion of the Constitution in America. It is the primary source for one of three book projects I have in the works for 2014. I stand by my notion that the Constitution is one of the most brilliant government slave ownership manuals ever penned by humans in history.

My wife brought this article to my attention.

As most of you know, I live in this freedom sterile zone near the Mexican border (for now) and have had to live in a hyper-saturated LEO zone that would make the East Germans blush with envy and anticipation.  There is even a permanent ICE/BP road block (not the quaint notion of a check point which is allegedly voluntary). You blow this without stopping for the black- or green-garbed (eerily matching the color motif of both the Nazis and the East German border guards) armed thugs and they will run you down.

Now the robed government employee, Korman, has declared de jure and de facto, the pretense of probable cause and reasonable articulable suspicion does not even need to exist for the police to seize your electronic property.

“District Judge Edward Korman made his ruling in New York on Tuesday, more than three years after the American Civil Liberties Union (ACLU) filed suit. The ACLU claimed that – since Americans put so much of their lives on their computers, cell phones, and other devices – border officials should have reasonable suspicion before sifting through someone’s personal files.”

“The trouble is, the ACLU noted, that almost two-thirds of the population (197.4 million people) live within 100 miles of the US border. New York, Washington, Boston, San Francisco, Los Angeles, Miami, and dozens of other major metropolitan areas fall under the so-called “exemption” zone.”

This would, of course, mean by implication that all international airports are “borders” and provide the means for the Federal government to establish yet another blanket beachhead using the Constitution to erode basic human rights and freedoms throughout the entire nation. There is no courtroom in the US that does not suffer an implied conflict of interest with the private citizenry because they are all government-managed with the statist drones making up the lion’s share of  staffing with a monopoly on the use of force in the hands of the badged and most likely overweight statist policing entities shambling through the corridors of the freedom-sterile zones of a Federal courthouse.  Like the fuselage of an American flagged airline, the Federal building ethos is one of complete domination of private citizens stripped of every thread of self-protection and human dignity. The prohibition on private weapons in courtrooms and courthouses is not only a manifestation of government hoplophobia but a very real concern for the rage generated unjustly against thousands of citizens who are abused in these star chambers for what are largely malum prohibitum crimes.

The implications are staggering and merely confirm the worst suspicions among freedom advocates that the naked power of the Federal government is essentially limitless. Please keep in mind this is a Constitutional ruling by a government employee. Much like having the police rule on their own misconduct by investigating the mischief himself or herself or the NSA claiming much like the DHS that the reasons for their behavior cannot be disclosed due to national security concerns. Most government supremacists are either too dull or drunk on ultimate power to see the delicious irony in the ruling. The ruling essentially confirms the worst forebodings of Constitutional skeptics like myself who know that the  document and the hundreds of meters of shelf space groaning under imperial judicial rulings are a very fancy bunting and excuse to grant unlimited power to the central government and incinerate individual liberty at every turn.

Fancy the judiciary in the Federal apparatus to be concerned with individual liberty and freedom? Hell, I don’t even fancy the ACLU to be concerned with it because of their historical institutional blindness to the Second, Third, Ninth and Tenth Amendments. Yes, I said Third because an enterprising civil rights attorney could have a lot of fun with that with a class action suit against the DHS for violating that rarely invoked amendment for the shameless LEO misbehavior in Boston after the bombing. I would be very interesting to see the definitional constraints on temporal limitations in that case.

All of this proves one thing that is crystal clear: there is no judicial remedy to get the Federal government and Mordor on the Potomac out of your knickers and no possible expectation of justice in the American system in the classical sense of the term as a remedy for wrongdoing. The American legal system is designed first and foremost to provide a legal excuse and imprimatur for government supremacist behavior. Dred Scott v. Sandford was an existential harbinger of things to come, it simply provided a contemporary viewpoint on slavery and human ownership that would be expanded to all men over time. Dred Scott v. Sandford was never repudiated formally but merely the construct for the entire legal scheme in America which is a notion that all humans in the tax jurisdiction in America would be subservient to a legal apparatus that even appropriated the right of non-citizens. There are many permutations to the Dred Scott decision that reverberated throughout the next 150 years but the most interesting is the notion of slaveholding as a right for which the Federal government could not be held accountable for the Missouri Compromise of 1820. But in the long history of linguistic legerdemain that is the stock and parcel of American jurisprudence, the very notions of slavery would become the backbone of all Federal expansion of power because self-ownership would become extinct as a legal principle.

This ruling is further proof for the observant and reflective sectors of the population that the Constitution is one of the most devilishly clever and manipulative anti-freedom instruments ever penned and that the perfidy and cunning of the Founding Lawyers should be a battle cry to fight for liberty instead of the incessant and ahistorical droning of allegiance and admiration for the fetid parchment.

If Korman has not got your freedom antennae quivering, you are asleep. Korman is the plantation owner’s legal representative and you have just been served.

Korman has levied yet another declaration of war on human liberty and dignity.

Please don’t write your Congressman, just tend to your preps and get out to the range more often.