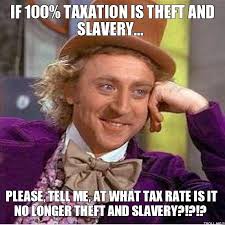 This essay is an incendiary device.  My muse is Wilberforce and the subject is the abolition of the last existing institution of slavery in America – taxation.  Like Wilberforce, we may be generations from satisfaction of the dream of the end of the coercive state but if the seed is not planted, the goal will never be realized.

I despise the income tax.  I loathe the property, excise, gasoline, sin, estate, capital gains and every other tax.  I think the colonists got it backwards, I want representation without taxation. These are often derided as utopian but I would suggest they are dystopian notions.  I see no possibility of perfection in this mortal coil but risk and possible failure are the engines of progress and capitalism invigorates the most powerful economic engine of all –self-interest to serve others.  Mises claims “[t]he member of a contractual society is free because he serves others only in serving himself. What restrains him is only the inevitable natural phenomenon of scarcity.”

I think it is loathsome for one man to own another and the involuntary tribute demanded by government is simply another form of owning another man’s wealth and labor.  Taxation is the way collectivists practice their compassion by taking their neighbor’s money at gunpoint.  It also violates the zero-aggression principle shared by many libertarians.  Taxation and slavery have some very close confluences in definition.  According to www.investorwords.com, a tax is:

A fee charged (“levied”) by a government on a product, income, or activity. If tax is levied directly on personal or corporate income, then it is a direct tax. If tax is levied on the price of a good or service, then it is called an indirect tax. The purpose of taxation is to finance government expenditure. One of the most important uses of taxes is to finance public goods and services, such as street lighting and street cleaning. Since public goods and services do not allow a non-payer to be excluded, or allow exclusion by a consumer, there cannot be a market in the good or service, and so they need to be provided by the government or a quasi-government agency, which tend to finance themselves largely through taxes.

These words are illustrative but couched in polite terms.  Taxes are monies forcibly taken from individuals and whatever other entity they can be drained from by governments or organizations (tax farmers) chartered by governments to extract whatever wealth they can through force and threat of violence.  Taxation is theft. James Bovard writes:

“The U.S. Treasury Department defines a tax as ‘a compulsory payment for which no specific benefit it received in return.’ No matter how many taxes a person pays, or what politicians promise, the taxpayer is not irrevocably entitled to a single benefit from the government. The level of taxation is thus a stark measure of government’s financial power over the individual – a precise gauge of the subjugation of the citizen to the financial demands of the state.”

The government has monopolized this enterprise because if you or I go to our neighbor and steal his funds or mug him at gunpoint, we go to jail.  If you doubt the power of compulsion, notify the IRS personally that you will no longer pay any more of your income taxes…for life.

It is, frankly, un-American.  We are a nation birthed in secession and tax revolt:

“We can now put in historical context Jefferson’s comment that it was good medicine for government to have a rebellion every twenty years or so. In the course of his lifetime there had been almost a dozen rebellions he was acutely aware of. Six were in the United States, starting with the Stamp Act Rebellion and ending with the Fries Rebellion. All of these rebellions, including the American Revolution, were tax revolts of varying degrees of intensity. In Europe, there were a number of tax revolts in the seventeenth century, from the excise revolts in Britain, to the tax-farmer revolts in the Netherlands, to the innumerable revolts and the revolution in France. Again, all were tax revolts. So when Jefferson tells us rebellions are good tonic for government, in his frame of reference he was talking about tax rebellions.”

One of my only favorite Presidents (a Democrat, no less), Grover Cleveland, came close to the truth when he said:

“When more of the people’s sustenance is exacted through the form of taxation than is necessary to meet the just obligations of government and expenses of its economical administration, such exaction becomes ruthless extortion and a violation of the fundamental principles of a free government.”

Mine is a more radical notion.  I don’t call for less taxation; I call for zero taxation because every time the government is given any capability to collect taxes, the institution is abused to the point of tyranny and despotism.  In 1944-45 under RedDR, we had an effective marginal tax rate of 94% on all income over 200k dollars.  Ninety four percent!  You’ll notice Eisenhower was so incensed by this that he immediately reduced it to 92% and graciously doubled the exemption to 400k.  Now we have one of our esteemed members of Congress calling for a 90% tax on the wealthy in America.  The Mafia could only dream of this magnitude of criminal behavior and subsequent benefit.

Now let’s examine what slavery is:  A condition of subjection or submission characterized by lack of freedom of action or of will.   It is the choice between submission and threats, fines, jail, maiming or death.

The Universal Declaration of Human Rights adopted in 1948 reads the following definition in Article 4:

“No one shall be held in slavery or servitude; slavery and the slave trade shall be prohibited in all their forms.

Of course, our imperious betters at the United Nations would not deign to conflate this with taxation because they are a nest of interventionists and Marxoid government supremacists.  Don’t expect relief from that august body of worthies.

I think we have established that the institutions of slavery and taxation are ideological twins harnessed to the central idea of power, control and ill-earned profit at another’s expense.

So how high is the domestic tax burden in America?  The Tax Foundation places Tax Freedom Day at April 23rd when the tax burden is complete.  The problem with their calculation is it is at 30.8 percent effective 2008.  My personal estimate is closer to 60%+ of American incomes are consumed by government tribute when all the various and sundry taxes and excises across the nation are counted.    It gets worse:  James L. Payne, from my hometown of Sandpoint, Idaho, authored a brilliant book called “Costly Returns”.  The thesis is simple:  we all pay corporate income taxes as an additional cost of doing business as consumers and we all pay for the tax accountancy and regulatory compliance businesses are forced by law to obey.  We then pay indirectly for the enormous dislocation of rational resource investment and return dictated through government fiat through this economically illiterate statist interference.  Acres and acres and tens of stories of every corporate building devoted to the hidden tax of indirect extraction and compliance with all manner of government absurdity in the Federal Register and its loyal subsidiaries at the state and local level.  What some refer to as the “Vampire Economy”.

Henry Hazlitt brilliantly elucidates this misallocation in the “Broken Window Fallacy”, to wit:

“The glazier’s gain of business, in short, is merely the tailor’s loss of business. No new “employment” has been added. The people in the crowd were thinking only of two parties to the transaction, the baker and the glazier. They had forgotten the potential third party involved, the tailor. They forgot him precisely because he will not now enter the scene. They will see the new window in the next day or two. They will never see the extra suit, precisely because it will never be made. They see only what is immediately visible to the eye.”

Economics at its most basic fundamentals is the study of the effective use of finite time and resources and money is merely a medium and a visible signal of resource and time preference allocation.   As Mises pointed out in the seminal book, Socialism, in 1920:  the state simply cannot take these monies and allocate them rationally absent price signals of end users.  Period.  Worse still is the sure knowledge of the futility and waste of the stolen funds directed to wasteful, illegitimate or immoral spending through political fiat and favoritism.

So we have discovered that taxes and slavery seek the same end – the involuntary extraction of tribute or labor through the institutional threat or use of violence.  Tax slavery is far more insidious than chattel slavery because the illusion of freedom is entertained throughout the entire sordid process and you are to be grateful to the highwayman and pleased with the conduct of the thief.

This is not a recent phenomenon in America.  Within two years of the adoption of the Constitution under the unfairly maligned Articles of Confederation, state troops were hither and yon on the American frontier to chase after tax cheats and evaders during Shay’s Rebellion. Tax revolts and disfavor have peppered American history from the founding to the 1930’s Depression Era to the modern day iterations that will soon emerge with a vengeance. There is no history of a government respecting the rights of citizens to retain the fruits of their labors.  These tax rebellions have been going on worldwide every year for the past few centuries.

So I am sounding the call not to reduce taxes but to abolish the last vestige of slavery in America.  Don’t employ the language of the rulers, call it for what it really is.  Slavery.

When you call for a reduction in taxes, you are simply legitimizing the theft and asking for softer velvet in the manacles but cuffs and shackles they remain. As long as you cede the seizure of your property to the occupying force known as government, you shame your children and grandchildren by guaranteeing them a legacy of more state power and  shackling their destiny to the whim of others.

“When faced with this circumstance, does the State abdicate? It does not. The general lack of interest in production threatens its own existence, but it still cannot divest itself of its inner urge for power. It turns to the use of force to stimulate the production from which it derives taxes. It confiscates and tries to run the entire economy by rules, regulations, controls, and compulsion; the nation becomes a slave-labor camp. But the output of an economy that rests on force rather than on self-interest is meager. More important than lack of production is the slave psychology that such an environment induces. Men lose their capacity for self-improvement along with their sense of individual dignity. Thus civilization disintegrates and becomes an historical or archaeological curio. The State, of course, collapses with the civilization.”