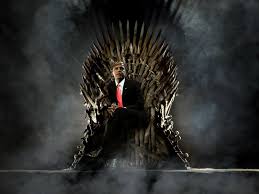 On July 22, 2008, Obama made the claim that he needed a civilian security force in America that would be a peer competitor to the capabilities and mission profiles of the DoD. One has to speculate what use he would put such an entity to but after years in office it becomes apparent that the president is simply another power-mad and narcissistic empty shell of a man whose existence is only made complete by wielding maximum power over others and using the threat and use of initiated violence to reshape society to his design.

Since the War on Drugs went into overdrive in 1972 and the “War on Terror” superseded its power to make police power and security the paramount concern of ALL government activity with the unfortunate events of 9/11, the government has been unmasked to be nothing more than a gigantic perpetual motion machine that seeks to protect itself from the troubles of the world that it creates for itself through incompetence, hubristic foreign military violence planet-wide and the creation of a national security state at home that would be the envy of tyrants through the ages.

Much like the officer safety nonsense that has left oceans of innocent blood on the streets and byways of America, the government seeks to erect a never-ending state of crisis, emergency and security paranoia which is a direct result of its institutional behavior. While the US has discovered since 1893 that war on the world is a terrific investment opportunity to incubate a larger and more intrusive state at home, the marriage of convenience between police and military means and technology has brought the possibilities of total state oppression to unprecedented levels. There are many research opportunities for the budding social scientist to examine some interesting but unplumbed questions. For instance:

What is the actual cost amortized throughout the entire system to kidnap, process through the legal system and confine all the non-violent offenders whose lives have been utterly ruined by the War to Stop Humans From Altering Their Consciousness? What is the opportunity cost of post-confinement employment opportunities? What have lost in advancement of civilization with this unique form of national seppuku?

What does a country produce that makes its primary foreign policy export the maiming and killing of men, women and children around the Earth to achieve a supremacy that has no coherent grand strategic framework except a penchant to bring Joe Haldeman’s notion of Forever War to reality.

Is there any possibility that the employment of biometric identification protocols, robot drones, rendition and the institutionalization of torture will come home to the US? Does the fact that the United Kingdom has been a socialist hellhole since the end of the War to Save Josef Stalin have anything to do with its imperial retirement from the world stage and a historical denial of civilian weapons ownership?

Contrary to the childish emanations of government supremacist organs like the house Pravda newspapers in DC and its subsidiaries across the fetid plain and the state media complex from the Collectivist News Network to Faux News, all is not well.

What does Obama want?

He wants to realize the potential of a fully federalized police force which has been on the march since the beginning of the 20th century. He is channeling the Iron Dream. One merely has to look at the Progressive march to central planning under Teddy Roosevelt and Woodrow Wilson. Notoriously, Wilson’s creepy American Protective League and the Palmer Raids that led to the creation of the FBI and the Volstead Act that nailed the coffin on all state discretion in enforcement were simply the harbingers of things to come. None of this is new, the opportunities are simply brighter for the black leather Stasi fever-dreams of the central planners.

There is not a President in the twentieth century who has not dreamed of eliminating all state boundaries on the exercise of a monolithic law enforcement mechanism over the entire country metastasizing into the national security state that literally put this consolidation into hyper-drive in the 21st century.  Obama simply said it out loud and may be closer to realizing the national socialist ambitions than any of his other morally crippled predecessors.

Even the exalted Ronald Reagan was a gun prohibitionist of the highest water as a result of his gubernatorial shenanigans in 1968.

This is not simply the far too numerous alphabet agencies at the Federal level but an actual absorption and de facto and de jure consolidation of all local and state policing functions. One sees this in the creeping consolidation efforts of Salt Lake City, Utah and St. Louis, Missouri and the promulgation of Intelligence Fusion Centers across the country that feeds this burgeoning leviathan complex. Consider the massive redistribution of war materiel and weaponry that is making its way from the Pentagon to local law enforcement everywhere. We saw evidence of this during the Boston Bombing fiasco when the overweight uniformed bumblers were desperately clinging to the outside of armored vehicles since they probably could not fit inside of them (what is the motif of police obesity?).

To a government supremacist, 19,000 separate law enforcement agencies are a tremendous temptation to put all the inefficient cogs in one giant cluster of a machine.

There is no conspiracy theory but simply the cold and inexorable march of federal laws and regulations quite literally choking out any subsumed political subsidiary in the temporary guise of local and state autonomy which in fact does not exist any longer.

I need not bore you with the clear and abundant evidence of the police brutality and viciousness that marks American policing today; worthies like William Grigg do a tremendous job of meticulously documenting the behavior of what can not be mistaken for anything less than an occupying army in America.

In the end, Obama was wishing out loud for something that has already happened.

I have said it before, police are the single greatest threat to human liberty in history. No political bad actor can strip a single individual of their freedom and liberty absent a police force.

The police in the US commit acts of murder all the time hiding behind the skirts of their true employers, the rulers, and have a license to kill enforced by the “qualified immunity” clause and the powerful government police unions.

All government laws require a field expedient death penalty imposed upon any who dare resist depending on the level of refusal to comply with the statist badged employees wielding a set of rules of engagement that make them judge, jury and executioner. In most cases they get away with it.

Remember that murder begins when self-defense ends, use that yardstick the next time you examine yet another citizen killing by the usual suspect in the thin black and blue line.

The Presidents merely wishes to nationalize the horrific notion and weaponize central planning.

The police do not stand between us and barbarism, they protect the forces that always make humanity worse off.

That is their job; to protect yourself from a few bad people, you put the worst in charge.

It will get worse, central planning ahs a penchant for that. 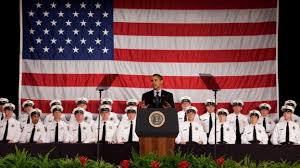 4 thoughts on “Obama and the Iron Dream: Death Rides a Police Horse by Bill Buppert”