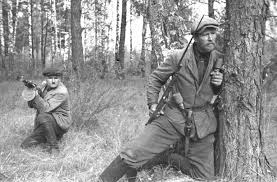 “History doesn’t repeat itself, but it does rhyme.”

Force ratios are usually on the side of the guerrilla aggressor in underground movements and resistance forces. The force calculus employed by government forces in preserving the statist quo are usually large but bereft of talent. Witness the US and coalition clown posse playing déjà vu in Afghanistan and Iraq. The employment of forces in combating a negligible threat in the Taliban and HQN in Afghanistan has cost trillions and over a decade of investment in what is a failed state riven by patronage networks and the patchwork assimilation of a faux government built on corruption, bribery, incompetence and external support of the most egregious malpractice in the region. But then again it is a simply a demonstration project at it most raw of what all government is without the fancy camouflage and bunting that adorns the Western kleptocrocies.

Both of these exploits come with their own peculiar qualities that led to success. Collins and his Flying Columns would eventually best the British Empire through both feats of arms, selective surgery of the constabulary and a capitalization of imperial exhaustion and defeat on the part of the British. The only undefeated German General on Earth in 1918 would have to receive a cease and desist order from the German authorities in WWI to stop his successful guerrilla campaign that would ironically best the Boers who had become British poodles after giving the UK a run for its money in two bloody conflicts at the turn of the century.

Both were conflicts heavily reliant on a self-sufficient enterprise for arming and fighting the transgressors in the respective wars. Lettow-Vorbeck would receive virtually zero support from Germany during the conduct of his four-year guerrilla campaign and the nature of the Irish Rebellion took on the same temper. The African campaign was far more a military-tempered campaign than the multi-dimensional campaign waged by the Irish who brought all the elements of rebel power to bear in a full-court press saddling up the political power of Sinn Fein in pursuit of nationalist goals separatist in nature and intent.

Both campaigns harnessed a certain ferocity of prosecution that left the British panting for breath in both cases. The German campaign was a relentless struggle to employ the indirect approach and constantly outwit the sclerotic and ego-driven cavalcades of calamities the Allied generals seemed incapable of deviating from. Time after time, the Allies were outgunned and outwitted at every turn by numerically inferior forces. Whether the Allies or British respectively were prisoners of their own incompetent decision cycles or simply outmatched in martial skill, the outcome soon became inevitable a mere two years apart in each conflict. In 1918, the Germans surrendered as a result of a failure of the home country to secure victory on the European continent and the exploits of Collins in 1920 on Bloody Sunday soon brought the Brits to the negotiating table to end their 800 year occupation of Ireland after a bloody four years of rebellion against a foe who was merely dust and shadows for the most part.

There are key lessons to be learned for the coming conflict in North America once the inevitable civil war touches off.

Lettow-Vorbeck’s campaign relied on a total self-sufficiency campaign in which no materiel or support would come from the country supporting the effort and the complete buy-in for trigger pullers and auxiliaries from the indigenous population would be critical to success. He held out for four years with astonishing success and relied on the basics of discipline and basic soldier skills to fight a lethal guerrilla campaign.

The Irish Rebellion had a considerable pool of savvy guerrilla talent to buttress a popular uprising that eventually bested one of the best armies on the planet. British hubris and over-reach in the employment of murderous constabulary certainly bolstered the effort fort the Irish defenders.

The bookshelves are groaning under the weight of the tomes penned in remembrance of the Irish Rebellion and that is not the case for Lettow-Vorbeck who still waiting for his literary champion to write the sagas for him extolling the virtues of one of the finest insurgent campaigns in Western history.

The coming unpleasantness in North America will be ugly and the more the combatants study history the more lethality they can bring to the table when the festivities kick off to see if the plantation owners prevail or fail.

Military history gives a unique professional advantage to those who will pay attention. A bloodless practicum to see what worked in the past to better save the future for the inevitable bloodletting that seems to be the fondest desire of the present regimes in America.

Turn off the glass teat and start reading and practicing what you believe. Unplug from the collectivist pabulum that convinces you day after day that assimilation is inevitable and no matter how horrific the moral outrage, it is all for you own good.

The fight is coming and a large part of good luck is meticulous planning and anticipation foe what the future portends.

They may have the numbers but history shows that your refusal can be a powerful weapon.

“The course of life and labour reminds me of a long journey I once took on the railway. Suddenly, there was a breakdown ahead, and passengers took the event in various ways. Some of them sat still resignedly, and never said a word. Others again, went to sleep. But some of us leaped out of that train, and ran on ahead to clear the road of all obstructions.”