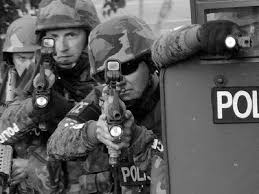 The monster hesitates in DC when the police imperium in the former swamp now known as DC finds its Praetorians choosing restraint over domination when the subjects of the tax jurisdiction known as the United States remove barricades from an open memorial to American planetary predation to deposit them at the fencing around the White House where the denizens of the Offal Office plan and scheme to steal more wealth and make more war.

This was not simply restraint but maybe a primitive acknowledgement between predators of different stripes respecting the bloodlust of the other. Not only was this not representative of compassion on the part of the police apparatus in DC but simply professional courtesy to another foreign branch of the policing disease.

If the protesters had moved on more judicious liberty targets like the IRS or the Clown Palace at Capitol Hill, the police drones would have reacted more protectively in defense of their primary clients, the rulers.

The reptile brain in the various policing gangs such as DC Metro, Capital Hill and Park Service simply realized that the veterans visiting the War Memorials were kindred spirits to the vicious and sadistic mindset that animates 99 percent of all 19,000 police agencies across the fetid plain. Much like the schizophrenic mental paralysis that cripples the intellect of so many conservatives: the notion that we can wage war on the world but demand restraint at home of the same government that looses the dogs of war. Much like the lunatic Kucinich who espouses praiseworthy goals of stopping the militaristic foreign policy of America cold since its imperial germination in 1893 yet in the same breath he champions the aggressive socialist platform of using the government to violently extract wealth and time from its citizens so the productive support the parasites and looters at gunpoint in the sadistic lottery known as democracy.

You can’t have it both ways. I am pro-life and anti-death penalty and the consistency is in the championing of life over death. I am a non-voter but Ron Paul as opposed to Kucinich represents the best humans have to offer because he wants peace on earth both domestically and abroad. But he is one solitary man in an ocean of elected moral eunuchs whose mantra is to fine, kidnap, cage, maim and kill any human unwilling to obey as they march us to fiscal oblivion in the pursuit of the perfect police state.

If the millions of veterans outraged over the recent closure of the memorials to foreign mayhem (including the War of Northern Aggression, a Lincolnian invasion of a sovereign and foreign nation) are philosophically consistent, they should insist that all the memorials be closed forever. They should not be confronting the badged gangs over closure but the very fact of their existence. They should march on the memorials and loudly demand: “Tear down these monuments to government violence!”

Every war America has waged has led to bigger and more lethal government at home. WWI gave us WWII and WWII gave us the Communist threat that was a wholly owned subsidiary of the Allies during the War to Save Josef Stalin. The fall of the USSR in 1989 was simply a placement of the silver medal around the still steaming corpse of the USSR while the victor in the West did everything they could to race toward central planning, population controls and enhanced police states.

Veterans of foreign wars who celebrate the invasions and initiated violence of mass warfare on behalf of their rulers are much like the badged thugs of the “thin black and blue line” that terrorize America.

Some libertarian pundits have opined that the relocation of the barriers and the standing down of the police brigades was reminiscent of “V for Vendetta” but the film was not a celebration of people marching to preserve the apologia to slaughter but a paean to the destruction of a parasitic political class.

Losing those men to your left and right in combat is a grisly and emotionally devastating affair that brands men for the rest of their lives. Raising a glass to the departed and remembering the best of who they are is a private affair but memorials to the dead subsidized by the stolen wealth of aggrieved taxpayers are noxious and a surrender to the worst that government does.

All government is ultimately a death cult and the celebration of its most concentrated efforts to maim and kill men, women and children is, frankly, outrageous. If you think that the twelve years of war and trillions wasted has been a boost to the economy, you may want to open your eyes and look around.

The only just war is one fought to defend your own soil and nothing else. The only right conflict is to repel invasion and that has only occasioned twice on the North American continent since 1775. I don’t want the government to subsidize any war memorials but I solemnly and gladly attended services of Confederate veterans when I taught at Ole Miss.

This whole notion of civil disobedience to keep taxpayer-subsidized celebrations of the mass slaughter of foreign enemies in useless wars open so veterans and sightseers can pat themselves on the back for bureaucratizing death and empowering big government is misdirected at best and delusional at worst. Next thing you know, protesters will gather outside the IRS to beg for longer visiting hours and chant for entry to see nine ancient robed government employees bargain their rights away and trash every notion of human decency.

I do hope this is a harbinger of some genuine unrest like the braver souls who wrestled the countries from the boot of the United Kingdom in the late eighteenth century. Yes, countries, because thirteen different colonies sued for peace in 1783 in Paris shortly before the political coup known as the Constitution slipped a new boot on and planted it on the North American neck.

The government reacted with restraint as it smiled on the Stockholm Syndrome subjects merrily defending the right of the realm to wage war abroad and at home.

The cops did not practice restraint in DC, it was professional courtesy.

2 thoughts on “The Monster’s Ball: Swing Dancing at the Barricades by Bill Buppert”