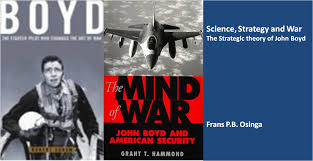 John Boyd did the intellectual heavy lifting after WWII to offer a new strategic paradigm to orchestrate warfare and deeply analyze why the larger nation-states would have increasing challenges that neither technologies nor big budgets would solve.  This essay will configure a Boydian lens over the current American conflict in Afghanistan in general and examine the green-on-blue violence phenomenon in detail to illustrate how the insurgent forces have commandeered the operational level.  Green-on-blue violence is the instantiation of hostile action against allied forces by indigenous coalition forces.

John Boyd was a visionary and much maligned defense intellectual who pioneered a number of theories and grand strategic suggestions which were almost counterintuitive to the accepted precepts and nostrums of the classical and neo-classical military philosophers and thinkers who had influenced the post-WWII Western vision of how military organizations train and fight.  He was the polar opposite of celebrated but fatally flawed modern strategic thinkers like Herman Kahn and John Von Neumann.  He realized that the future fight and the evolution of warfare would still be ultimately reliant on people and not technology.

Boyd discovered and pioneered the modern Air Force combat fighter pilot methodology and contributed in deeper philosophical waters with an examination of how to build cost effective fighting organizations, prescient predictions of new (due to historical amnesia by the West) modes of conflict such as Fourth Generation Warfare and was one of the key innovators in designing the F-15 and F-16 fighter aircraft.  One of the peculiarities of Boyd the man was that he did not write books and most of his intellectual legacy has been written by others. What makes Boyd even more interesting, if not enigmatic, is he is rather hard to pin down for a legacy in the pantheon of modern strategic thought except through his followers and acolytes.

Boyd always emphasized dynamism in thinking and the willingness of large and small organizations to adapt to emerging changes and threats.  Purpose and not merely process were driving attitudes that imbued his work and thinking; a purpose to react in conflict in a fashion that would gain advantage by striking weakness or leveraging surprise.  Nothing Sun Tzu would find scintillating or irregular.

Boyd then extrapolates these seemingly ordinary nostrums into human decision cycles.  His prognostication on the Observe, Orient, Decide and Act (OODA) Loop provides an elegant explanation on the way humans do their everyday business and wage war.  His influence has spread far beyond the war-room to the corporate boardroom. As with all intellectual contests, he has his share of detractors who find him shallow, derivative or unoriginal.

Colin S. Gray describes as eight attributes of the American approach to strategy. [1]  While Gray hails from an ultra-Clausewitzian school of strategic thought and has on occasion taken a dim view of Boyd, they happen to agree on these approaches and why most are pathologically wrong-headed.

Boyd, was above all, a synthesist who drew from a long history of strategic thought and considered one of the pillars of advantage to be capability to compromise a threat decision cycle before it could even initiate action.

A Boydian assessment of the green-on-blue violence in Afghanistan would most likely appreciate the enemy decision to compromise the decision cycle of friendly forces and create an indefinite postponement of the critical notion of handing over power to the indigenous forces to create an exit strategy.  By foreclosing on an exit strategy, the threat realizes that the longer the occupation remains in place the more alienated and agitated the mass base will be for the occupier.

“In recent days, rogue Afghan security forces have killed six servicemen from the NATO-led military coalition, pushing the number of such fatalities past 50 in a single year for the first time. The death toll highlights one of the biggest challenges facing the coalition as it nears the end of its role in Afghanistan’s war.

These killings, known as “green-on-blue” or “insider attacks,” have increased substantially within the past two years, accounting for14% of coalition casualties in 2012. Though statistically small compared to the numbers of IED-related (roadside bomb) deaths, these attacks have a significant impact on the coalition’s mission in Afghanistan.

The two provinces burdened with the bulk of green-on-blue attacks are Helmand and Kandahar. It is no coincidence that these areas are where the Taliban are strongest, and where the country’s highest levels of opium poppy cultivation help fund the insurgency.” [2]

Whether the violence is sponsored at a higher level by Taliban forces who are infiltrating these provocateurs into the ranks or, worse yet for Allied forces in the occupation, these are spontaneous incidents or lone wolf attacks, the results are the same: a permanent trust breach that will ripple through the entire force structure.  Despite nearly eleven years of occupation, the US forces barely own the road networks outside of Kabul much less the more remote regions next to Pakistan.  One finds this eerily reminiscent of the debacle the Soviets were enduring while they attempted to pacify the country.  It even harkens back to the difficulties the dozens of German Wehrmacht divisions attempting to pacify mountainous Yugoslavia in WWII.

“The perception of occupation rests on two main factors: (1) that Western forces are in Afghanistan to support a corrupt and illegitimate central government in Kabul, and (2) that Western forces are willing to impose harm on Afghan civilians to achieve their aims” [3]  The green-on-blue violence is a direct result of the this occupation as evidenced by the suicide bomber trends Pape describes in his book throughout the world.

Assuming the Taliban or a number of disparate rebel organizations opposed to the US occupation are behind this, it infers that these forces have hijacked and compromised the high-level decision cycle of the Allied forces at the operations level.  If so, what strategic advantage would this afford the anti-occupation elements in Afghanistan (and by extension, Pakistan)?  The operational level uses subsidiary tactics to fulfill a strategic vision.  In this case the end-state is to drive the occupation forces out of Afghanistan permanently.  Lind sums it up nicely:

“Having set a realistic strategic goal, we next must understand what strategy is. Col. John Boyd, America’s greatest military theorist, defined it as a game of connection and isolation. We want to break the Taliban’s vital connections while strengthening our own.

As is widely recognized, the key to both is Pakistan. That country is the Taliban’s enabler. Break that connection, and the Taliban would be greatly weakened. In turn, most observers know that we need to strengthen our own connection to Pakistan. In strategy, geography counts.” [3]

The operational construct of the resistance in Afghanistan is far more sound and prone to success whether unwittingly or by design by compromising the decision cycle of the US military forces in Afghanistan than anything the Allies can throw against it. Again, defense intellectuals and US policymakers tend to diminish the operational and tactical IQs of their opponents and the American track record of definitive victory since the end of WWII speaks volumes to the wisdom of this hubristic and ultimately wrong-headed view. Lind’s notion of connection and isolation is so basic it almost becomes a natural inference yet American forces consistently get these associations wrong and monkey-wrench their own perceptions of who is fighting whom on the ground.

In the end, the Americans will follow the Soviets and British into the same trap the Afghans have so ably set for every invader.

[3] Pape, Robert, and James Feldman. Cutting the Fuse: The Explosion of Global Suicide Terrorism and How to Stop It. Chicago: University of Chicago, 2012.

Bousquet, Antoine. The Scientific Way of Warfare: Order and Chaos on the Battlefields of Modernity. New York: Columbia University Press, 2010.

Luttwak, Edward. The Grand Strategy of the Roman Empire: From the First Century A.D. to the Third. Baltimore: Johns Hopkins, 1979.

5 thoughts on “John Boyd and Patterns of Conflict: Post-Modern Strategy Deficit Disorder in the Green-on-Blue Violence in Afghanistan by Bill Buppert”