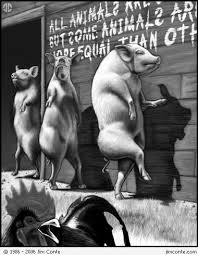 “Liberty, then, is the sovereignty of the individual, and never shall man know liberty until each and every individual is acknowledged to be the only legitimate sovereign of his or her person, time, and property, each living and acting at his own cost”

A couple of years ago my Service Manager came to me with what he thought was a fantastic idea. He was planning to take all of the production hours from the shop, combine them, and then split the hours evenly among all of the mechanics in the shop.

For those of you who don’t know, auto mechanics are generally paid on the “hours” they produce. We call it flat-rate. Here’s a brief explanation on how it works. Let’s say your vehicle needs a front brake job. You, the customer, paid $250 for the job, but the mechanic is paid 2.5 flat-rate hours. The mechanic is paid the same flat-rate 2.5 hours regardless of how long it takes them to do the job. If the mechanic can get the job done correctly in one hour, they still receive 2.5 hours of pay. This is still the case even if it takes them longer than 2.5 hours. You get the idea. The hours a specific job will pay will vary with the difficulty level. For mechanics, this is a blessing and a curse. For talented mechanics, it’s a great way to make a comfortable living, especially in high volume shops. This is the system that is most widely used by automotive shops, dealerships and independents.

From the brief description above, you can see that this system is set up to motivate and incentivize the individual mechanic to work smarter and faster. My goal every day as a mechanic is to “turn” 1.5 hours for every hour I’m actually at work. This would mean that I would be working on my next vehicle while still getting paid on the last vehicle. That’s really the goal of any flat-rate technician. The faster a mechanic is able to get the vehicles in and out, the more money they will make. This is beneficial for both parties in the employer and employee relationship. The employer doesn’t necessarily pay the mechanic on hours clocked, only hours turned. There’s been days where I’ve been at work for 10 hours, but I’ve only made 3 hours. When there isn’t vehicle on my lift, I’m not getting paid. The overhead  costs of employing a flat-rate mechanic tend to be relatively low. Also, the employer knows that a mechanic is less likely to slack off and just leave a car sitting in their bay all day long. The manager knows that the mechanic would be wasting their own time as well as the company’s time. This system is beneficial in many other ways, like the promotion of study and education in the field, but that’s not really the focus of this essay. To this point, I’ve just tried to establish a basic understanding of the mechanic’s pay scale. From here, we can move on and I will show you why I did the face palm in the meeting with my manager.

I voiced my dissent to his newly proposed plan, along with a couple of other team leaders, but to no avail. This was a man with an idea, reason be damned. Although, he did make a somewhat coherent case for his position, I will at least give him that. This was a time when the manufacturer I was working for was having a hell of a time building a decent vehicle. Engine, wiring, transmission, and braking system problems were rampant. This was also on top of very involved mass recalls that took hours per vehicle. The diagnostic work that some of these vehicles demanded was well above the skill level of many of the mechanics in the shop, but they were well equipped for routine maintenance. His plan was to put the team leaders and the senior techs in charge of all of the heavy diagnostic work, recalls, and other “shit work”, while the less experienced mechanics knocked out all of the maintenance and routine repair work, or what mechanics call “gravy”.

The experienced mechanics were not very happy about this plan. There is very little money to be made in warranty diagnostic and repair, and recalls. This means that their paychecks would immediately take a hit. My manager knew there would be an instant revolt against this seemingly unfair plan. This is where he confidently said his plan would work. By combining all of the turned production hours, the senior mechanics wouldn’t have to worry about doing the “shit work” all day, because they would still be getting paid on the “gravy” the younger mechanics were turning out. After his explanation, he had gotten quite a few guys to support his position, but I still knew it was doomed to failure; I suspected a rapid failure at that.

The plan was put into action, and the flaws in the system were seen almost instantly. Part of the reason my manager did this was because he thought it would “free up” more mechanics for light repair and maintenance work. It did leave more mechanics open for work, but the maintenance and repair jobs that used to be accomplished by the senior mechanics were taking the less experienced mechanics twice and three times as long. It seems the seniors weren’t only faster at heavy repair.  Flat-rate mechanics generally keep track of their turned  hours on a daily basis. It’s prudent to do this, because mistakes are made from time to time, and if you don’t watch out, you’ll lose out. As a team leader, I kept track of all of my team’s hours. I knew exactly how many hours the people on my team could turn. I knew the strengths and weaknesses of everyone on my team. I saw a drop in production hours in just about everyone on my team. Mechanics were now taking lunch when they never used to. More smoke breaks were being taken. People who I knew could produce good, fast work just weren’t doing it anymore. Aggregate monthly shop production hours began to drop.

The total number of hours can be divided up into groups, and more closely examined. General repair and maintenance may account for 70% of the hours, while warranty repair may account for the other 30%. We noticed a drop in both of these categories. On top of the younger mechanics generally being slower at their jobs, they also did not possess the experienced eye of the senior tech who could spot that torn bushing, or quickly find an A/C problem, or could recall the specific timing belt service intervals of the vehicles that came through the door, etc. It’s basically the difference of going over the vehicle with a rake and a fine-tooth comb, and since all of the repair and maintenance was going to the less experienced, lots of potential labor was being missed.

I also noticed that everyone began watching everybody else. Instead of the individual relying on themselves to work and make their own living, they were relying on others to make their paychecks. What this means is that there was a whole bunch of mechanics focused on the wrong thing. Instead of focusing on their work, they were focused on the guy next to them. Even though my manager combined the groups into one big hive(what he called a super-group), the team leaders retained their lead positions which meant they were still fielding complaints from the mechanics. Here was #1 complaint–“This is bullshit, I know he can work faster than that.” I heard that daily, and the thing about it is, the complaining party was usually right, and it could be proven. Occasionally, a fight would almost break out, because some techs were working harder and getting paid less, and some were working less and getting paid more. This is because some of the mechanics in the shop were never cut out for flat-rate work, and they were now dipping into the good mechanic’s pocketbook. They were enjoying the wealth redistribution.

And that was my primary objection the entire time.

I remember confronting one mechanic, because it was very obvious that his production hours had dramatically fallen off. He was a 15 year veteran at this stuff, and I knew he was a very capable technician. I asked him what was up, and he told me, “well, I’m doing all I can.” He was one of the techs who was working hard, but being paid less, and it was really wearing him out. His incentive to work and earn more had been sapped. It’s like someone took a bite of his carrot and then put it back in front of him; it’s not so appealing when someone else has been chomping on it. He could no longer directly see the fruits of his labor. His labor was taken from him, mixed with everyone else’s labor and then returned to him. Most of the time it was less–sometimes much less–than what he was used to.

This was the main reason for the drop in aggregate production hours. Mechanics were abusing the wealth redistribution plan. The mediocre producers were producing less, and the morale of the top producers took a complete nose-dive resulting in a drop in their production levels. The minor problems certainly played a role in the decrease of production, but this plan was doomed from its creation. The fundamental error in this theory is the same fundamental error found at the core of the collectivist philosophies that champion wealth redistribution. It’s the fundamental error of not treating a thing as it is; not treating a human as a human; not treating an individual as as individual. I thought this story was interesting, because it shows how wealth redistribution could not be harmonized within a group of sixteen men. It is a utopian fantasy to think it could ever be accomplished on a much larger scale. It is a micro scale experiment in socialism that ended in utter failure.

There is one difference in the story I have just told and the situation you now find yourself in. The mechanics in this story could have walked out at any time if they did not agree with the philosophy and policies.

“To require conformity in the appreciation of sentiments
or the interpretation of language,
or uniformity of thought, feeling, or action,
is a fundamental error in human legislation —
a madness which would be only equaled by requiring all men
to possess the same countenance, the same voice or the same stature.”