“The men the American people admire most extravagantly are the most daring liars; the men they detest most violently are those who try to tell them the truth.”

The two primary reasons most people want government to exist is for protection and advantage.  When I say most people I am excepting that smaller group of people who actively seek to rule others;  the socio- and psycho-paths among us who have a deeper need and selfish interest in championing the furtherance and expansion of government.  The yen for protection speaks to the fear most folks have of being unsecured in their safety and existence and the mistaken assumption that their subsequent surrender of their right to defend themselves will make them safer.  The advantage speaks to the need to have some external entity play umpire and ensure that everyone conducts themselves by a “consensual” playbook which of course leads to gaming of the system exemplified for example by preferential treatment codification in law for special interests.  We know that neither of these ever ends well for the individual historically.  There may be other tangential reasons but these two elements comprise the lion’s share of the twisted rationalizing that passes for thought on why government should be the overweening and powerful monster it is today.  Government is the gateway drug to mass tyranny.  Please spare me the soliloquies of “limited government”, an ahistorical chimera if ever there was one.  There is simply no historical record, Eastern or Western, of the existence of one.

One hears even the most committed government supremacists prattling on about the inadequacies of this policy or that and the often comedic second order effects and unintended consequences of the implementation.  The government authored crises tumbling over one another until you hear intellectual giants like Ghoulsbee (sic) over the weekend mewling about the necessity to increase the debt ceiling or the economy will collapse.  Deja vu.  Somewhat like a person or company insisting that their already unmanageable credit line be increased or doubled or they won’t be able to meet their obligations.  If we don’t flatten the Earth immediately, it will continue to be round.  You will note that demonstrable proofs or historical case studies verifying the substance or utility of this notion are not entertained.  The Keynesian game is up and its bankruptcy there for everyone to see but the believers think that with enough heel clicking and wishful thoughts, their caustic economic illiteracy will become reality.  This is what ALL non-Austrian  economists have come to;  nothing more than court apologists for what can only be termed bad alchemy heavily laden with the polar opposite of any critical thinking whatsoever.  This is also a result of the meme that is currently in vogue that there are human structures and creations “too big to fail”.  This is, of course, a fatuous and silly notion; for governments are designed from the beginning by their very structural necessities to be self- destructive mechanisms that not only cause irreparable harm to themselves over time but grind untold millions of lives into dust and ruin in their path. 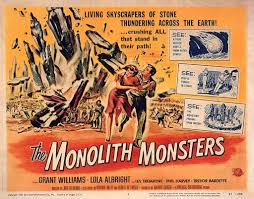 Much like the Monolith Monsters in that delightful 1950s B-Movie, government grows and grows until it collapses under its own weight and contradictions (note that Marx got that one sideways, again).  The historical record is strewn with massive corpse count after corpse count of attempts by well-intentioned government supremacists to build the shining city on the hill time and again.  From Mesopotamia to Rome to modernity, the most flawed and morally handicapped men rose to Olympian heights granted with God-like powers on the monopoly of violence and coercion that is the hallmark of ALL governments to despoil, deprive and deny men their liberty and their lives.  Of course, the magisterial histories written over time have always given grand stories of the trials and tribulations of the great men overcoming obstacles to the imposition of organized crime and violence on the masses.  There have some minor aberrations in this history like the Magna Carta and the Declaration of Independence but these were made null and void within several generations of their acceptance or adoption.  The Constitution being the most proximate example of liberty extinguished in a generation.  Merely statistically insignificant speed bumps in the continual steamrolling and abolition of individual volition in favor of a collectivist zeitgeist.

Individual liberty is an historical aberration and that is an unfortunate fact.

Take heart, for there have been individuals in history who have stood athwart this seemingly unstoppable monster and found ways to injure it or impede its progress such as Wilberforce or the Anti-Federalists, both of whom deserve your closer attention.  There are actually legions of others who have contributed in smaller ways such as Lysander Spooner and the individualist anarchist brain trust in 19th century America, the filial progeny of Milton Friedman (certainly not Milton who gave us some of the gravest injuries to liberty in the 20th century) and the emerging Austrian David against the collectivist Goliath.  I can put it no more eloquently than Lysander Spooner did in his letter to Grover Cleveland in 1886:

“To say, as the advocates of our government do, that a man must give up some of his natural rights, to a government, in order to have the rest of them protected the government being all the while the sole and irresponsible judge as to what rights he does give up, and what he retains, and what are to be protected — is to say that he gives up all the rights that the government chooses, at any time, to assume that he has given up; and that he retains none, and is to be protected in none, except such as the government shall, at all times, see fit to protect, and to permit him to retain. This is to suppose that he has retained no rights at all, that he can, at any time, claim as his own, as against the government. It is to say that he has really given up every right, and reserved none. . . .

It is especially noticeable that those persons, who are so impatient to protect other men in their rights that they cannot wait until they are requested to do so, have a somewhat inveterate habit of killing all who do not voluntarily accept their protection; or do not consent to give up to them all their rights in exchange for it.

If A were to go to B, a merchant, and say to him, “Sir, I am a night-watchman, and I insist upon your employing me as such in protecting your property against burglars; and to enable me to do so more effectually, I insist upon your letting me tie your own hands and feet, so that you cannot interfere with me; and also upon your delivering up to me all your keys to your store, your safe, and to all your valuables; and that you authorize me to act solely and fully according to my own will, pleasure, and discretion in the matter; and I demand still further, that you shall give me an absolute guaranty that you will not hold me to any accountability whatever for anything I may do, or for anything that may happen to your goods while they are under my protection; and unless you comply with this proposal, I will now kill you on the spot,” — if A were to say all this to B, B would naturally conclude that A himself was the most impudent and dangerous burglar that he (B) had to fear; and that if he (B) wished to secure his property against burglars, his best way would be to kill A in the first place, and then take his chances against all such other burglars as might come afterwards.

Our government constantly acts the part that is here supposed to be acted by A. And it is just as impudent a scoundrel as A is here supposed to be. It insists that every man shall give up all his rights unreservedly into its custody, and then hold it wholly irresponsible for any disposal it may make of them. And it gives him no alternative but death.

If by putting a bayonet to a man’s breast, and giving him his choice, to die, or be “protected in his rights,” it secures his consent to the latter alternative, it then proclaims itself a free government, — a government resting on consent!” 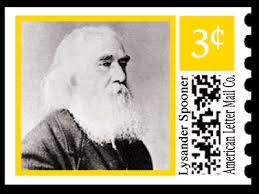 Spooner is experiencing a renaissance of sorts and I am happy to make my own small contribution to that.

We are truly living in an age when so much information is available and all the tools of liberation are at our disposal that the government has to work doubly hard at maintaining that the emperor is properly attired.  This is one reason they cling to the stranglehold they have over ALL government education in America and monitor and encourage the government-media complex to contain the “proper reading” of reality as we know it.  This is also why you see the dramatic push for more government intervention in the internet with the demise of the old media titans in newspaper, radio and television.  The internet is a true bottom-up revolution in mass communications as evidenced by the tiny audience that deigns to read my scribbling.

The total and apparently synchronized destruction of the Western way of governance is underway regardless of the efforts of these failed machines to reckon a course to safety.  Greece was a bellwether and the inevitable collapse of the Western remnant is underway despite the best efforts of the Marxoid Key[ne]stone Kops at the helm.   It is rather amusing in a morbid way to watch our worthies in the US Federal government ignoring every possible avenue that expands individual freedom in a futile bid to preserve their rotting and dissolving feedlot system in the tax jurisdiction handily referred to as a nation state.

From this mess, we will see either a resurrection of more of the same or enough folks will finally wake up and see that government has always been the reason for their destitution and deprivation and not a bulwark against it.

Do your part, citizen: resist the state.

8 thoughts on “If Government is the Answer, You Must Have Asked the Wrong Question by Bill Buppert”