“There is a word very commonly used these days: “anti-communism.” It’s a very stupid word, badly put together. It makes it appear as though communism were something original, something basic, something fundamental. Therefore, it is taken as the point of departure, and anti-communism is defined in relation to communism. Here is why I say that this word was poorly selected, that it was put together by people who do not understand etymology: the primary, the eternal concept is humanity. And communism is anti-humanity. Whoever says “anti-communism” is saying, in effect, anti-anti-humanity. A poor construction. So we should say: that which is against communism is for humanity. Not to accept, to reject this inhuman Communist ideology is simply to be a human being. It isn’t being a member of a party.”

Publisher’s Note: My youngest son rotates out of his Okinawan tour with the USMC in August, I look forward to him coming home to be closer to his parents at a western posting to finish out his enlistment. The Corps is an existential train wreck in so many ways that I will explicate once he has safely concluded his four-year enlistment. Right now, he has no intention of reenlisting, thank the Gods.

He is one of the most talented shooters I know, and the Corps has done nothing with that wealth of genetic skill and knowledge.

I just started ProfCJ’s epic multi-part series on the “not so civil war” starting at episode #131 in his DHP podcast series. I mentioned before I started at episode #53 to enjoy my commutes to the day-job. I am an amateur military historian and he has really rounded out my knowledge base and expanded the power critique to areas I had not investigated.

In other news: “Why are anti-gun activists so violent?” When you turn that question around and ask it the other way (why are the government supremacists so opposed to private humans being armed?) then it pretty well answers itself.

Don’t let the communists seize the high ground on language; if gun violence is responsible for two thirds of all suicides, is it rope violence if they hang themselves? There is no communist country in recorded history that permitted private weapons ownership. I say again, you will note that the disarmament enthusiasts NEVER advocate the disarming of government forces. It is not even in their “moral” imagination.

The title of this essay is quoted from the widow of Vaclav Benda, Kamila. Her husband was a jailed dissident in communist Czechoslovakia. The courage of Benda in defying his government is so much more profound than the faux outrage and cost-free virtue signaling of the present generations of outraged harpies and impassioned soy-bois who man the fainting couches. Keep in mind that the present RESIST! army in America is a plea to not reduce the size and scope of government but the opposite. These new communists want the largest government in the history of humankind to get even larger and deadlier.

That is their fatal conceit because they know what’s best for you.

“Because we knew Mordor was real. We felt that their story” — the hobbits and others resisting Mordor — “was our story too.”

“Kamila talked about how she once received a letter from Vaclav from prison. In it, he wrote of the possibility that they would emigrate in exchange for early release.

“I wrote back to tell him no, that he would be better off staying in prison to fight for what we believe is true,” she told me.

Think of it: this woman was raising six kids all alone because her husband was a political prisoner. Yet she told him that the cause they served was more important than the relief of their suffering.”

The kids told about how their parents vaccinated them against the disease of communist ideology by raising them to know that the things they heard at school and in the media were lies. In other words, Vaclav and Kamila were consciously counter-cultural, and understood that they had to impart the same sense to their children, to keep from losing their children to propaganda.

Any government beyond self-government is naturally a delimiting affair for liberty as the population increases subject to the coercive nature of its rules. Hence America is too big to succeed at anything but tyranny.

Dunning-Kruger Effect is a serial killer of freedom…it is one of the most vital tools of the government university system, ground zero of the kakocratic mandarins in the faculty lounges.

The present Murder Inc. political combine in DC is nothing more than a gang with colored rags, bad music and really shitty rationales for mass violence. You’ll notice that the mountains of laws on the books from the Federal to the local level come with a death sentence to any disobedient serf depending on their level of resistance to initial apprehension by the standing army of coproaches that cravenly but obediently carry out every order by their political masters.

After all, they’re only upholding the law. They’re only following orders.

The pathetic Republicans are merely the Menshevik straight men for the Bolshevik comedy troupe prancing about as Democrats. Since the Mango Mussolini has been in the Offal Office, it has been my pleasure to see the mask fall off as the collectivists on the “left’ lose their minds and say what they’re really thinking. From infanticide to private weapons confiscation to wholesale seizure of economic sectors from nominally private hands, the parade of communist caterwauling and virtue signaling has been magnificent to behold.

And keep this in mind the next time you are chatting (is that possible?) with a government supremacist troll (friends, neighbors, countrymen!) and ask a simple question:

“Is there anything, one thing, in your agenda to recreate man in your image that doesn’t require violence to implement?”

In other words, is there any leftist* creed that does not require you to bow and scrape and submit to the state in every facet of your existence? You will note that the communists have been largely successful since the beginning of the first Roosevelt occupation of the Offal Office at the turn of the twentieth century. That’s a convenient jumping off point for the accelerated phase of the massive state when accountancy technology and bureaucracy were really coming into their own. I don’t want to let the Founding Lawyers and Comrade Lincoln off the hook, but it is not germane to this discussion. 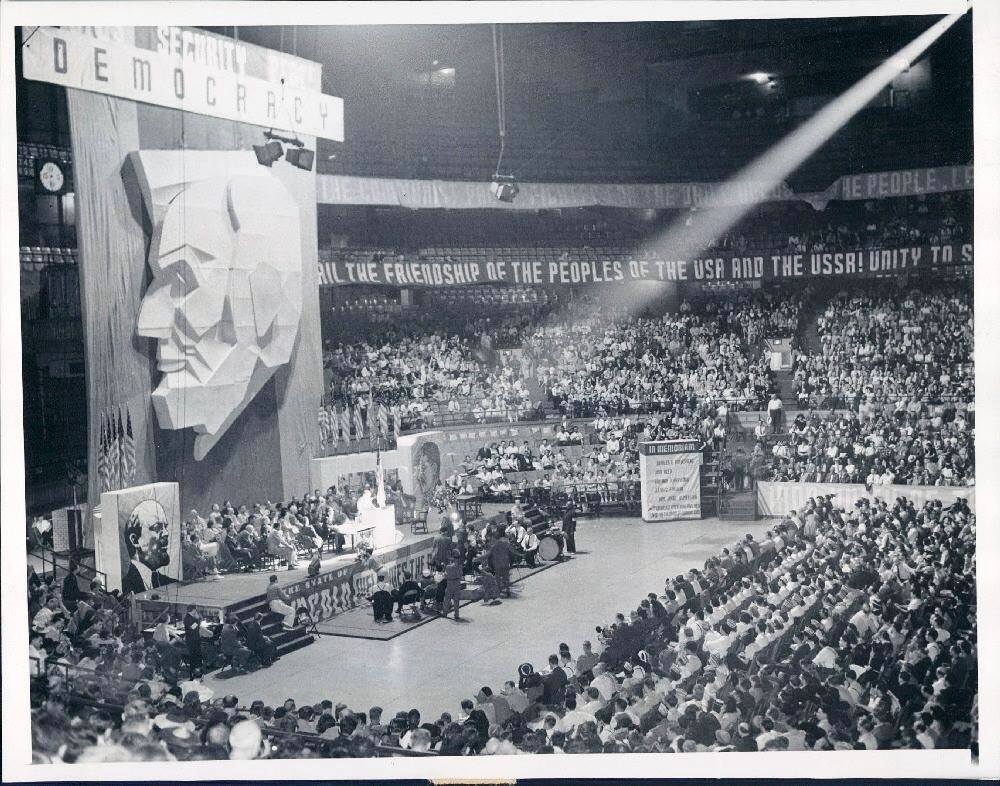 There was a reason the Communist Party USA had a huge figurehead of Comrade Abe at their 1938 convention.

The short answer is no. Absent coercion and terrorism, no government in the history of man could last a month.

They must threaten violence to the population.

They must indoctrinate the young in the learned helplessness that is state obedience (why do you think they call it civics?) in the government mind laundries.

They must initiate violence.

They must employ a vast army of badged Orcs supported by a pet judiciary of robed cross-dressers that lovingly protects its uniformed thugs in all their atrocities.

They must actively other dissent.

In other words, they must do everyday what they punish you for in every aspect of behavior. Absent hitting and stealing, how could the state flourish? Let that sink in.

The othering works in both directions because I refuse to consider communists human beings anymore, I have made my own conclusion that they are no longer in the human race. They are Morlocks of the worst variety, a death cult.

Hence the technological de-platforming of dissident voices. I have been on sabbatical from Twitter but the most corporate harassment one would receive from that social media circus was any opposition to human slavery. The government and the big corporations it is married to in the shotgun wedding of mutual interests have the same goals: consolidation of power and the elimination of any competitive forces arrayed against it (them).

The Red Threat is not dead.

It is alive and well.

* As my readers know, I think that the notion of left and right is clever misdirection and legerdemain, there are only collectivists and individualists; every other distinction has no useful measure in this mortal coil. For simplicity’s sake, I am employing the shitty argot of the political system.

“You only have power over people so long as you don’t take everything away from them. But when you’ve robbed a man of everything he’s no longer in your power — he’s free again.”

“It is perfectly possible for a man to be out of prison and yet not free—to be under no physical constraint and yet be a psychological captive, compelled to think, feel and act as the representatives of the national state, or of some private interest within the nation wants him to think, feel and act. . . . To him the walls of his prison are invisible and he believes himself to be free.”