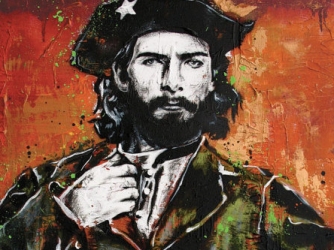 Publisher’s Note: Another guest post by the indefatigable John Meyers. I have taken a departure for a bit from the more philosophical ruminations one is accustomed to seeing here to focus on establishing training and preparedness baselines for the coming Endarkenment. Things are getting sporty and the communists will not relent in employing every means to rob you of your self-ownership.

“The rifle itself has no moral stature, since it has no will of its own. Naturally, it may be used by evil men for evil purposes, but there are more good men than evil, and while the latter cannot be persuaded to the path of righteousness by propaganda, they can certainly be corrected by good men with rifles.”

– Jeff Cooper, Art of the Rifle

“This is a beginner to novice level class on how to run your gun effectively under tactical field conditions. Beginning with basic square range work out to 200+ meters, it focuses on the fundamentals of marksmanship and effective gun handling as an individual, before moving into working with a partner.

This class requires a fighting rifle, a minimum of four magazines (for magazine fed rifles), and some method of carrying those magazines effectively.”

I previously organized Mosby’s Clandestine Carry Pistol course last summer in Western NC. Due to its wild popularity and by shooter demand, we had him back for his carbine course in May 2018. The class maxed out very quickly on announcement of the course and I stopped keeping an alternative list for slots if anyone backed out, when it reached 10.

As with all courses I take, I was seeking to better my personal skills. In particular, in my work in hosting/organizing classes, I also want to better the local community’s skillset as well.

I have taken a number carbine courses over the years and spent most of my training time working a rifle. I wanted to get another set of experienced eyes on me and looked to ratchet up the efficiency in my own application of tactical rifle craft.

I am a fan of RDS (red dot sights) and LPVO (low power variable optics) for their respective applications. I have however been putting more time into focusing mostly on the LPVO as a ‘do all’ optic. Knowing Mosby is also a fan, I chose to run an LPVO exclusively during the class.

Of course with most former and current SOF guys, it was no surprise to me that fundamentals were the main focus of this class.

We then went into a discussion about the types of stops in a gunfight. Mosby recited a Jack Donovan quote that stuck with me “Respect your enemy, but have enemies worthy of respecting.”

When we got on line, most of the morning was spent in reinforcing natural point of aim and accuracy from various positions including prone, kneeling and others. Dry fire and live fire made for effective reinforcements of the concepts.

One thing that stuck out to me was his use of a time standard to reinforce getting into different positions efficiently. This also ties to the concept of the light infantry concept of the 3-5 second rush. If it takes you 10 seconds to get into prone after your 3-5 second rush, how effective are you really being in your team context?

After basic positional work at various ranges and confirmation of zero’s we moved to presentations with focus on headshots at various ranges, and the head A-zone in particular.  Mosby has a fairly unique take on hold overs/height over bore compared to the industry at large.

We then worked mechanics and manipulations including speed reloads (bolt lock), reloads with retention and ‘tactical reloads’ using time pressure and dry fire.

One thing of note was toward the end of the day, Mosby brought out a couple different platforms than the AR15 to demonstrate a few things, such as basic manipulations with a pump shotgun and m14/AK type manual of arms. The overall point was, if the weapon is proven reliable, anything will do, if you will do.

The day ended with a tag out type contest working presentations.

Day two started with multiple round and multiple target work. As with the pistol class, a focus was placed on rhythm or cadence when doing work. Some automatically dismiss this as ‘gamer’ stuff, but there is no doubt about the usefulness of developing effective rhythm, as it will make you both faster and accurate. We worked these drills at various distances and various positions. As usual, Mosby’s focus was a small target area that would result in effective stops in the real world. An emphasis was put on using the timer (OMG!) as a means of gathering information on students shooting. While it’s obviously possible to shoot much faster than .5 sec splits, Mosby placed great emphasis on that standard as it still allows decisions to be made while shooting. If you are running .17 splits, you are hanging it out there without the capability to process changes in the battle space.

There was a discussion about load outs and gear philosophy. As is Mosby’s usual custom, shooting is mixed with discussions to allow students to fully digest what they learned and given an opportunity to mentally decompress.

We worked shooting on the move and the eternal debate of whether to shoot first and move to cover, move then return fire or shoot while on the move where applicable.

We then had a discussion on medical gear, a decent length AAR of the first 2 days and a Q+A session.

Day 3 started with Mosby’s awesome lecture on mindset, situational awareness and civilian application of METT-TC. I still contend this is a highly effective talk and must listen for everyone, especially those who have generally been confined to only a survivalist mentality in training.

After hitting the range, we went directly into processing work and working all the fundamental skills learned in more complex decision-making type drills and exercises. They all incorporated movement, working around no shoots, processing the situation at hand, under various forms of stress. Day 3 was highly effective in tying everything together from the previous days.

I ran one of my main rifles with an LPVO on it. It is a stock LaRue PredatAR 16” when they still had Geisselle triggers in them. The only mod is a brake/mount to accept my suppressor. Scope was a Vortex Razor Gen II 1-6x, day light bright illuminated red dot w/ mil reticle and turrets in an ADM mount.

I ran a couple HSGI Taco’s on a belt mounted Raven Moduloader and I also purposefully alternated using my back pocket.

This was a great fundamentals class and as usual presented in the laid back Mosby fashion. As stated previously, Mosby uses andragogical methodologies to convey his material. His classes are purposefully set up in a rather low round count to ensure students understand the concepts correctly and then allow these concepts to be drilled rigorously on their own time. His thought process is that a 2 or 3-day class isn’t enough time to gain mastery in the skill, but to ensure you know the process for you to practice it perfectly on your own time.

To address some comments about the class, I’d like to point out the importance of fundamentals. It’s almost the same across the board of former SOF guys who teach weapons and tactics that their main focus is on perfect execution of the fundamentals. Larry Vickers, Pat Mac, Kyle DeFoor and similar guys all focus most of their course work on sights and triggers vs. Hondo rolls and cheetah flips. If you cannot hit your target accurately in a quick manner, what good are tactics? I’d also argue that shooting is very perishable and must be maintained regularly and at a high level. I discussed the issue in more detail here.

There was also some recent controversy over a posting about Budget builds. (Here is a follow up) During this class I saw at least 3 lower quality rifles go down that required back up rifles to be brought out to finish, lights repeatedly fell off of guns (It was not a Streamlight or Surefire by the way), and a couple optics fail. There was also some equipment and accessories on rifles that were questionable and the instructor was quick to point out the weak points.

The class was not particularly strenuous nor a high round count. There was neither a blizzard nor a monsoon. I think the importance of employing gear that works was highlighted. Whether the lesson was learned is yet to be seen.

As always it was great to see Mosby again and am looking forward to taking the rest of the courses in his repertoire. I’d highly advise seeking him out and setting up a class or at minimum buying his books. And again, if anyone is interested in attending a Mosby class in Western NC please contact me and we’ll get it set up.

About the author: John Meyers traces his Appalachian ancestry back nine generations to the 1750’s. He lives with his family on the high ridges of the Smoky Mountains.