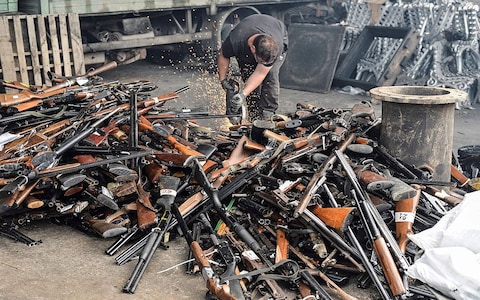 “When a people lose the courage to resist encroachment on their rights, then they can’t be saved by an outside force. Our belief is that people always have the kind of government they want and that individuals must bear the risks of freedom, even to the extent of giving their lives.”

“Then said he unto them, But now, he that hath a purse, let him take it, and likewise his scrip: and he that hath no sword, let him sell his garment, and buy one.”

The NRA will not save your ability to defend yourself, they are invested in the government just as much as the commies…

The weapons prohibitionists who seek to eradicate all private ownership of guns, and notably have no such case for government arms, are at it again. Usually the murder of apex political violence brokers by private gunmen like Boothe, Guiteau, Czolcosg, and Oswald sets the gun prohibitionists in a lather. Much like the frustration of the American central state in the first 150 years of failing to be capable of imposing a mandatory and trackable tax on income until 1913; the attempts remained feeble and uncoordinated until the Kennedys were killed in the 1960s; the magical combination of bureaucratic horsepower, accountancy standards, tracking of arms through a nation-wide database and the political will on the part of American collectivists (twice as many Republicans as Democrats would vote for the 1968 Gun Control Act, a horrific infringement on self-defense that would start the cascade of nonsense that would bloom like communist inspired kudzu across the fruited plain).

This would be presaged by Ronald Reagan going full gun control with the backing  of the NRA (of course) in 1967 with the Mulford Act. The uppity blacks who dared to actually carry weapons in public made the Republicans fill their pants in California at the time.

Fast forward to today and we see that the usual suspects are at it again. What is curious is that the political vermin and their deep state alliance are doing two curious things: they are floating trial balloons for eradicating about repealing the Second Amendment demonstrated most recently by the former Supremes zombie aspirant, John Paul Stevens, spewing his vitriol about having to repeal the 2A to curb gun violence. Like the other ancient communist ghouls on the bench (at every level), their brief is the eradication of freedom that is not explicitly granted by a gargantuan beneficent state.

I welcome the repeal, of course, as I mentioned in this screed.

“The call for repeal of the Second Amendment is nothing new, a cursory internet search will reveal hundred of opinion-editorials and the usual collectivist vermin calling for this to happen; they, of course, hail from the government supremacist viewpoints of the collectivist keening and whining that is the national media voice in America on both Fox and CNN and everything in between (excepting the lonely planetary outpost at ZeroGov).

Not that the 2A is worth the paper it’s printed on. The 2A is a sham to protect weapons ownership. It has no teeth whatsoever. If it did, how could the 1934 NFA, 1938 FFA, the decision in US v. Miller in 1939, 1968 GCA, Nixon’s pogrom against handguns, the 1986 FOPA, Bushevik I’s ban on foreign cosmetically offensive weapons in 1989, the NICs, the AWB all the way to the conservative zombie Scalia’s Leninist bromide about “dangerous and unusual weapons”. On and on and on.”

What’s curious is that if the Second Amendment doesn’t guarantee an individual right as so many American socialist observers contend, then why bother? Isn’t the wholesale ownership of the judiciary by government supremacist boosters enough to use the judiciary to simply stamp out the right for good?

The usual suspects have been floating this nonsense for decades including this gem from 2007:

“This seems to me the right response to the amendment no matter which broad historical interpretation is correct. If, in fact, the amendment embodies only a collective right and the right to keep guns is indelibly linked to membership in the old militias—institutions that no longer exist—the amendment is already a dead letter. Repealing it would be then a simple matter of constitutional hygiene, the removal of a constitutional provision that has no function now nor could in the future but that, by its language, encourages the belief in an armed citizenry that I, for one, do not wish to see.”

It appears that this notion of individual firearms ownership really gets under the skin of the academic scum who churn this detritus out for a living while other rodents in the academy applaud politely the “heroic” stance of wanting to disarm and dismember the private ownership of weapons in an entire society.

No government weapons included, no restrictions there. Why, that would be…ahem…uncivilized.

The author, Wittes, further avers: “If, on the other hand, the amendment really does as Silberman, Tribe, Amar, and Levinson essentially claim–and I suspect they are all more right than wrong—then it embodies values in which I don’t believe.”

This is the crux of the complaint from the women of both sexes and frightened males who need a fainting couch if someone talks about owning a weapon much less shows one to them. Next they’ll be making me pay for their adult incontinence diapers so their not fear-shamed in public for their unmanly natures.

They not only don’t believe in your right but feel their discomfort merits the wholesale confiscation of property that is not only private and expansive but secures a seldom seen quality; not only does it offer a brake to tyranny but it has been demonstrated planet-wide and throughout history to be a sure thing in effecting regime change. A confiscation that of contested will demand the liberal use of government guns to affect the forced removal of arms from Americans who refuse their betters in government’s request to surrender their arms. They may even have the temerity to violently repel boarders at their homes and take the seizure so seriously they commence a guerrilla conflict to play plink-a-pinko with the government agents the cowardly academics and politicians send to do their dirty business (don’t they always).

One can see the present assaults on freedom of speech from these same confreres whose delicate sensibilities demand the fist of the state to stop them from filling their pants when someone dares to disagree with them and refuse to speak the language they seek to force them to. These communists get the vapors if anything happens in society without the government boot as a preamble to behavior.

I intend on revisiting the latest attempts by academia and book publishers to press the edge of the envelope with the historical fiction that not only was early America gunless but much less of a gun culture than any observer imagined. In this case the fantastical and fiction filled exploits of Bellisiles successor, Comrade Michael Waldman.

He has a number of conceits that I will examine such as his claim that the 2A only applies to government forces. Any government does not need a Bill or Rights to arm its military, then or now. I have yet to see such a citation in any funding resolution for the DoD.

And keep in mind I am no defender of the Constitution but even his interpretive framework strains credulity to the limit.

Which is why his book is being used as a bulwark to defend calls for disarmament (again).

I will craft a much more in-depth examination.

I leave you with this tidbit from David E. Young:

“There are fundamental problems with this book, and historical errors and internal contradictions abound. Waldman views the state militia protecting nature of the Second Amendment as crystal clear. However, this conflicts with numerous assertions of the Second Amendment’s utter ambiguity, no doubt designed to cloud the rather clear “right of the people” language- “foggy wording”, “odd locution”, “is so inscrutable”, etc. His emphasis on the impossibility of understanding the Amendment’s language flows into reviews of the book. Waldman’s ambiguity campaign and his admission of not knowing why Madison’s version was phrased as it was, result in this question – why would anyone read this book to find out about Second Amendment history and intent?
Treatment of Vermont’s 1777 Declaration of Rights ‘people have a right to bear arms’ provision by Waldman is schizophrenic, the result of adamant refusal to accept its private rights protecting nature. His argument on the number of right to arms provisions is in error unless Vermont is included. He treats Vermont as a state in his text, then criticizes Justice Scalia’s Heller decision in a note for mention of Vermont because it was “a separate republic”. Yet, in that note, he refers to Vermont’s declaration of rights as that “state’s” charter. Justice Scalia’s Heller decision and Justice Stevens’ dissent both quote Vermont’s right to bear arms provision, treat it as significant, recognize it as protecting individual rights, and use it in their argument. Scalia is rebuked, while, conversely, only praise is heaped on Justice Stevens’ “powerfully set[ting] out the historic record”. Agenda driven spin is apparent throughout this book.

Entirely ignored in this book is the extensive Bill of Rights historical foundation of the Heller decision presented in briefs and cited by the court. He also ignores the existence of the Parker decision, appealed to the Supreme Court as the Heller case. Parker cited extensive historical evidence from the Fifth Circuit’s Emerson decision, which Waldman only mentions in passing as an individual rights ruling. The reason for individual rights rulings commencing with U.S. v Emerson is it was the first case where the full Bill of Rights history of the Second Amendment was ever cited to any federal court.

Waldman’s historical argument essentially follows that in Justice Stevens’ dissent, which follows the assertions of professional historians in their Heller case brief. Advocates of gun control will like The Second Amendment: A Biography, and it will be useful for someone studying typical gun control advocate views about the Second Amendment. However, it will also be uncritically accepted as historically accurate by many, who will be misled into accepting the author’s unfounded belief system. Waldman’s stated purpose is to support a “new history-driven regime” where professional historians and law scholars are paid handsomely to advance his ‘clear’ understanding of the Second Amendment. In other words, Waldman wants to brainwash the people and the courts into accepting his completely erroneous view of our history relying on the assertions of credentialed ‘experts’.

In stark contrast to Waldman’s confused historical work, there are sources that document every detail of the Second Amendment’s development. Those in search of reality-based history should consider sources relied on by the federal courts as well as Alan Gura, the attorney who won the Heller/Parker cases.“

When the government tells you they intend on restricting something that is presently available, buy more. Lots more.

And remember when the government seeks to disarm, the only reason that is important is the ease with which it allows the same government to make you dead.

“To oblige the great body of the yeomanry and of the other classes of the citizens to be under arms for the purpose of going through military exercises and evolutions as often as might be necessary, to acquire the degree of perfection which would intitle them to the character of a well-regulated militia, would be a real grievance to the people, and a serious public inconvenience and loss.”

14 thoughts on “The Government Hates Your Guns by Bill Buppert”