Publisher’s Note: I have nearly completed the Glock fleet upgrade with some exceptions like the addition of maritime cups, which I am debating.

I’ve also found that I can use fountain pen boxes for holding barrels in the range bag (even metal cigar tubes if a microfiber cloth is wrapped around the barrel).

I use a Maxpedition Fatboy to hold my conversion kit and barrels for my 23-19 along with a small ‘smithing kit, lights and batteries. Whenever I employ the conversion, I just reverse the load-out in the MaxP. This also sits in a rather mundane day-planner when on the road.

For my AR, this is a very low profile case to carry it in. I’ve custom configured scavenged foam on the inside from a Pelican.

Please be sure to post any ideas you may have in the comments here or at the forum. I also invite my readers to post any recommendations on resistance/irregular warfare literature they may find informative and entertaining. –BB

“Arms discourage and keep the invader and plunderer in awe, and preserve order in the world as well as property . . . Horrid mischief would ensue were the law-abiding deprived of the use of them.”

I’ve talked about Peak Guerilla before which I posit at 1916-1922 with the major innovators in T.E. Lawrence, General Paul Emil von Lettow-Vorbeck and Michael Collins in theaters planet wide during those tumultuous years.

While a reluctant Anglophile, I have always admired the plucky ‘special operations forces” the UK deployed globally during the War to Save Josef Stalin. From Stirling’s resolute SAS and SBS spinoffs to the LRDG and Orde Wingates innovations in southeast asia.

Despite the seeming truth that the British win all their martial contests in spite of their best efforts, I still admire these outliers in British arms. The English fondness for eccentricity let these “rough men” thrive in a way the American military would never tolerate.

I just got finished reading a rather fascinating tome on Churchill’s notion of “ministry of ungentlemanly warfare” and it was most revealing. I recommend it.

Here’s another great link (thanks Aesop). It leads to a host of vintage manuals from the 1940s.

My friend Lester Grau’s interpretation of the Russian Partisan manual from 1942 is most instructive.

I have an entire portion of my home library dedicated to the history of irregular warfare. Mostly Western history as Eastern is simply beyond my scope of inquiry. You could spend a lifetime mining the anecdotes and data.

There are many distillates to be learned among which is the notion of strategic compression, using tactical means to achieve strategic objectives such as assassination, sabotage and deception.

There are also fictional treatments that are most illuminating.

Eric Frank Russell’s Wasp is a classic 1957 yarn about one single mischief-maker laying an enemy planet low. One of the more priceless quotes from the novel: “For months we have been making triumphant retreats before a demoralized enemy who is advancing in utter disorder.”

“First 2 of the 5 steps to foment trouble: “‘First of all you must establish the existence of an internal opposition. Doesn’t matter whether it is real or imaginary so long as the enemy becomes convinced of its actuality.’

‘Secondly, you must create fear of that opposition and provoke the enemy into striking back at it as best he can.'”

Read the book to get the other steps.

Michael Z. Williamson does an excellent job starting with The Weapon and his entire Freehold series.

“Population pre-event, fifteen million. Population post-event, ten million and dropping. Four Operatives. My share of the initial casualty count was one million, two hundred and fifty fucking thousand people. The number was meaningless except as a strategic calculation and a sick, horrible comment percolated thorough my thoughts.

– Kenneth Chinran, a character in The Weapon, Page 440.

The CIA declassified an OSS sabotage manual in 2008 that turned out to be an ironic commentary on how deeply American had been penetrated by communist ideas in 1944.

“We’ve collected below some of the timeless instructions on how to be a terrible employee. What’s most amusing is that despite the dry language and specificity of the context, the productivity-crushing activities recommended are all-too-common behaviors in contemporary organizations everywhere.”

You won’t find much here that doesn’t seem to be a DMV instruction manual for new employees.

Or this gem from the CIA for the Contra clown posse in Nicaragua fighting the Stalinistas. Spill liquids! Drop typewriters! Threaten the boss by telephone!

True treasure troves of information are the US Army Engineering Data Books published before 1990 if you can find a hard copy [a 2003 edition of 5-34 is available here] along with the variations of the Ranger Handbook from February 2011.

Those familiar with the resistance oeuvre can find plenty of fascinating books out there that can inform activities.

Since I have been writing a novel, it has been the perfect opportunity to read some of the more esoteric items out there.

Pay careful attention to the video footage trickling out of Venezuela for a preview of things to come. Police vehicles are splattered with paint balloons followed by Molotov cocktail aperitifs.

For every victory, many defeats will be rippled from the actions such as the assassination of Reinhard Heydrich in Czechoslovakia.

So one can reverse most every military or paramilitary action in history to provide a window into possible futures.

Further debunking the myth that the Resistance was a popular  movement,  one  must  take  into  account  who was  resisting  for  the  most  parts,  communists, socialists, and other members of the political left those right of the political center  were more commonly allied with Vichy or worked as collaborators.”

– Jeffrey Folker, The Nature and Extent of the French Resistance Against Nazi Occupation During World War II 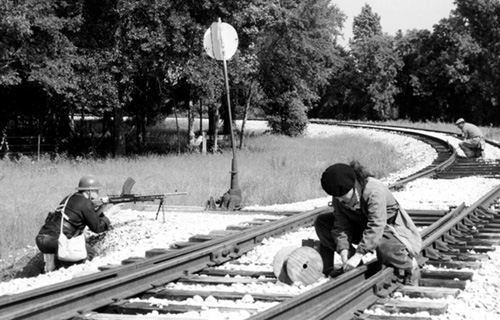 16 thoughts on “Village Praxis: Resistance is Fertile by Bill Buppert”