“Death solves all problems – no man, no problem.”
– Joseph Stalin

“Turkey is taking advantage of the war in order to thoroughly liquidate (grundlich aufzaumen) its internal foes, i.e., the indigenous Christians, without being thereby disturbed by foreign intervention. What on earth do you want? The question is settled. There are no more Armenians.”

– Talat Pasha in a conversation with Dr. Mordtmann of the German Embassy in June 1915…

Publisher’s Note: It’s amusing to watch the Deep State exposes itself in the proverbial raincoat through the many scandals emanating from the fetid swamp in Mordor on the Potomac.

If the NSA surveillance of the domestic herd is any count, there are no missing texts, emails or any electronic communications.

If you aren’t making the time to get fit, get to the range and get your head wrapped around taking care of yourself in the future-is-now American Serbia, you are not paying attention. -BB

Government is a death cult. It is the most profound mechanism outside of planetary extinction events to rid the globe of human beings.  There have certainly been disease vectors like the plague in medieval times that wiped out significant parts of Europe but even that can be attributed to human volition to a certain extent.

The state is an exterminationist by trade, ask the aboriginal Americans.

Since the first agricultural communities attracted the government predator’s eye thousands of years ago and led to the tax accountancy records Charles Adams first pointed out to us.  Hunter gatherer communities were quite a bit more difficult to pin down and cage within the confines of a tax jurisdiction.  Tax jurisdictions are the center of gravity for governments to germinate and expand their nefarious enterprises.

All government historically leads to totalitarianism where no human transaction remains unmolested by statist interference. None.

Whether the murderous paroxysms of violence in the endless wars created by tax jurisdictions dressed in fancy bunting and flags in ancient times or today have more advanced killing machines, the mission is the same.  Government will ultimately kill you for non-compliance of a seatbelt violation if your lack of obedience and insistence on resistance continues and escalates.

The more extreme examples of bureaucratized slaughter and mayhem visited on populations by governments are illustrative of the potential of every government to do the same. That is the genius of government, not only to elevate the absolute worst psychopaths to positions of power because they seek to rule others by default but it industrializes murder machines.  How else can one explain the killing fields in Kampuchea, the bone yards in the former USSR and the mass starvation campaigns either inadvertently or intentionally launched against subject populations?  From Rwanda to Armenia under the Turks to the North American aboriginal destruction in 18th and 19th century America, governments kill.

That is their ultimate fail-safe mechanism.  If their power is threatened in any fashion, the cage and the sword and the grave are essential tools of governance. 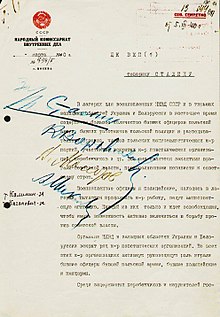 Beria’s Death Warrant for 20,000 Polish Officers During the War to Save Josef Stalin

Many thanks to Dr. Rummel for the research he has pioneered in this effort.

The Russian attempts to starve significant parts of the Ukraine under Stalin’s reign:

Conquest quotes the later testimony of an activist:

“I heard the children…choking, coughing with screams. It was excruciating to see and hear all this. And even worse to take part in it…. And I persuaded myself, explained to myself. I mustn’t give in to debilitating pity…. We were performing our revolutionary duty. We were obtaining grain for the socialist fatherland….

Our great goal was the universal triumph of Communism, and for the sake of that goal anything was permissible — to lie, to cheat, to steal, to destroy hundreds of thousands and even millions of people….

This was how I had reasoned, and everyone like me, even when…I saw what “total collectivization” meant — how they “kulakized” and “dekulakized,” how they mercilessly stripped the peasants in the winter of 1932—3. I took part in this myself, scouring the countryside, searching for hidden grain…. With the others, I emptied out the old folks’ storage chests, stopping my ears to the children’s crying and the women’s wails. For I was convinced that I was accomplishing the great and necessary transformation of the countryside; that in the days to come the people who lived there would be better off for it….

In the terrible spring of 1933 I saw people dying from hunger. I saw women and children with distended bellies, turning blue, still breathing but with vacant, lifeless eyes…. I [did not] lose my faith. As before, I believed because I wanted to believe.”

You will note here on this page that delineates anthropogenic killing globally that it wasn’t simply the bad communists (although they get the gold medal in sheer numbers) but the UK was responsible for 4 million Indian dead in Bengal during Churchill’s little known escapades raping India during the War to Save Josef Stalin in 1943 (a passing mention of the possible 20 million dead during the Indian famines of 1876-78 and 1899-1900). Watch Bengali film maker Satyajit Ray’s film “Distant Thunder” to get a cinematic taste of Churchill’s murderous policy.

Or the 1.5 million dead during the Irish potato famine[s] in the 19th century.

The Black War (1828-32) in Australia against the aboriginals is especially terrifying because they almost managed to exterminate every man, woman and child.

I mention these western holocausts to illustrate that history’s traditional mass murderers, the Communists and Socialists, aren’t the only authors of such barbaric behavior.  Mind you, plenty of this behavior took place outside of acknowledged warfare such as Stalin and Mao’s efforts to kill the non-compliant and disobedient.

But not to exclude the necromonger all-stars:

“Troops stormed into the Preah Ket Melea Hospital, Phnom Penh’s largest and oldest, and shouted to patients, physicians and nurses alike. “Out! Everybody out! Get out!” They made no distinction between bedridden and ambulatory patients, between the convalescing and the dying, between those awaiting surgery and those who had just undergone surgery. Hundreds of men, women and children in pajamas limped, hobbled, struggled out of the hospital into the streets where the midday sun had raised the temperature to well over 100 degrees Fahrenheit. Relatives or friends pushed the beds of patients too wounded, crippled or enfeebled to walk, some holding aloft perfusion bottles dripping plasma or serum into the bodies of loved ones. One man carried his son, whose legs had just been amputated. The bandages on both stumps were red with blood, and the son, who appeared to be about twenty-two, was screaming, “You can’t leave me like this! Kill me! Please kill me!”

– John Barron and Anthony Paul, Murder of a Gentle Land

The population of Cambodia was about 7 million. It is estimated that between two and three million died. The remainder were forced to engage in the physical labor necessary to grow rice.

The number of dead did not trouble the Communist leaders, and Ieng Sary, their foreign minister, said: “As long as we have one million left, that will be enough to make the new man.”

Pol Pot and his associates have earned the right to be called the most consistent Marxists the world has ever seen.

In the Communist program for human regeneration, killing is as necessary as the fire of the furnace is for the creation of steel.

In the end, ALL governments seek to maim and kill the non-compliant because obedience is the signal contribution of ANY citizen in a tax jurisdiction yesterday, today and tomorrow.

Keep in mind that the lion’s share of all wars in human history are armed disputes between tax plantation owners.

In America, absent the overwhelming presence of armed bureaucrats, how many of even the most brain-dead subjects in America would comply with a fraction of the thousands of intrusive and destructive laws on the books?

Your collaboration with a system that practices such barbaric behavior on a mass and industrial basis is the key to government’s legitimacy and its very ability to have fractional elements of tens of thousands of “law enforcers” cow millions of shambling sheep to be disposed of as the government wishes; especially the recalcitrant and rebellious black sheep who no longer desire the fetters and are increasingly losing their fear of the noose.

As Aleksandr Solzhenitsyn said: “Any man who has once proclaimed violence as his method is inevitably forced to take the lie as his principle.”

Initiated violence is the government’s bread and butter and any active defense against its depredations is always received by the rulers rather dimly.

As my colleague Daniel H adroitly observes: “Anarchy doesn’t require everyone in a society to buy into non-aggression… just enough of them to kill anyone who attempts to form a non-voluntary organization.”

The only reason you are not yet dead is because the government has not found a sufficient reason or lacks the wherewithal to kill you. Yet.

“There are no morals in politics; there is only expedience. A scoundrel may be of use to us just because he is a scoundrel.”