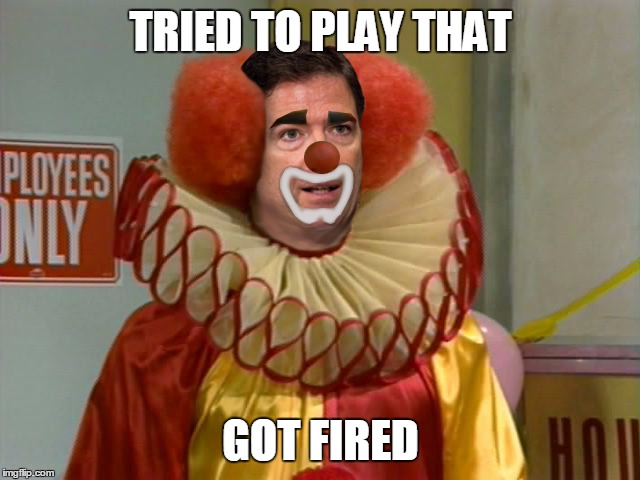 “They might not love Big Brother, but they knew he was part of the family now.”

The FBI has been under fire in the past year for various and sundry crimes against logic and probity and this is much more deeply ingrained in the culture of the political agency since its founding. It was developed as the original secret police organization for the US government to wield to seek its political ends.

The sacking of Comey the Commie is simply the latest above-ground evidence that the agency is broken for its ostensible purpose of crime investigation and simply exists as an American analog to the Cheka, NKVD, KGB and Gestapo. It even reflagged its purpose with the blank check moniker of national security.

It has relied on Lysenko-style science that would make the Russians blush in embarrassment. Fingerprint and hair analysis are simply the most recent blunders of applying junk science to crime fighting.

Louise Robbins, the crackpot anthropologist, developed a cottage industry of nonsense sending folks to prison for bootprints. Many in the “just-us” system fell for it hook, line and sinker.

Much like the scientism that informs the climate alarmism that has so damaged proper science in the last generation, the FBI has invested much of its reputation on the “scientific” notions of fingerprints and hair analysis but all turns out to be dust and shadows.

The FBI conducted the criminal pursuit of an alleged terrorist on March 11, 2004, several bombs exploded in Madrid’s subway system with 191 killed and 1,460 injured.

The FBI sent two of their senor fingerprint analysts to Spain on a mission to salvage the Bureau from humiliation. The two analysts did their best, returning with the claim that the fingerprint sent to the FBI by the Spanish police was of “no value for identification purposes”, a claim which the inspector general later shot down by pointing that only a few weeks thereafter the FBI’s latent fingerprint unit concurred with the Spanish national police lab’s determination that the print on the bag matched the right middle finger of Ouhnane Daoud.

It all turned out to be garbage and throughout the years, more and more skepticism has been aimed the notion of fingerprinting having a unique capability to individuate criminal suspects. Mind you, much if this started to crumble under the heroic gaze of DOJ IG Glenn Fine. If independent review of this had been done by non-government civilians, the charade would have long ago crumbled and tens of thousands of innocents people would be living normal lives (and even survived not being sent to Death Row).

Even more so, if modern journalists weren’t state stenographers and actually practiced critical thinking,f much of this travesty would have been exposed.

And hair analysis is more voodoo science that the government has given tremendous traction to.

Of 28 examiners with the FBI Laboratory’s microscopic hair comparison unit, 26 overstated forensic matches in ways that favored prosecutors in more than 95 percent of the 268 trials reviewed so far, according to the National Association of Criminal Defense Lawyers (NACDL) and the Innocence Project, which are assisting the government with the country’s largest post-conviction review of questioned forensic evidence.

The cases include those of 32 defendants sentenced to death. Of those, 14 have been executed or died in prison, the groups said under an agreement with the government to release results after the review of the first 200 convictions. Keep in mind that the Federal judicial system is a finely honed system of prosecution where not only do more than 90 percent of the cases get pled but the follow-on cases that actually make it to trial see more than 93 percent of the defendants convicted. A combination of bottomless pockets (fed by the taxpayers held and robber at gunpoint), a public carefully mesmerized by televised police procedurals that make forensic science seem like a magic bullet, the advantage of monopoly judiciary authority and the Stockholm Syndrome behavior of American juries.

When you stand in an American courtroom at any level as a defendant, you are likely the only non-government employee in the entire room.

Arson investigations and the use of expert witnesses are just as much subject to the junk science attributes of hair and fingerprint analysis. I’ve spoken at length of the fraud at the Force Science Institute before. Not to mention the bloodcurdling and sickening police sycophancy of the monstrous Dave Grossman and killology. I consider LTC Dave Grossman’s hypothesis of “killology” to be junk science; if even a fresh-faced Wehrmacht recruit, who had undergone at least five years of Hitler Youth conditioning prior to being inducted couldn’t handle the idea that the people he was shooting were merely “sub-human,” then how the hell are Grossman’s claims going to hold water?

This is the nonsense used to convict and at the other end of the processing spectrum for getting into the American gulag we have the use of dogs to establish RAS and PC.

Dog scent lineups are another facet of the arsenal of bad science that political law enforcement uses in the US to fill up the prison systems at every level.

This criteria makes it abundantly clear that there is no room for either the deputy or his dog in the courtroom. Dog scent lineups belong in the discredited science closet with its ancient kindred “the world is flat” discipline.

The distressing news here is that literally hundreds of thousands of people in the US “just-us” system have been quite literally caged and murdered using not questionable forensic methodologies but continuing to do so as doubt was cast on them over the decades.

I haven’t even discussed the kabuki that FBI entrapment in terrorist plots across the nation.

If you’re submitting budget proposals for a law enforcement agency, for an intelligence agency, you’re not going to submit the proposal that “We won the war on terror and everything’s great,” cuz the first thing that’s gonna happen is your budget’s gonna be cut in half. You know, it’s my opposite of Jesse Jackson’s ‘Keep Hope Alive’—it’s ‘Keep Fear Alive.’ Keep it alive.

It simply continues unchecked and the usual suspects in the media continue their job as human megaphones for government disinformation and misdirection at every turn.

Something has to be done to justify all that terrorism spending. For all those law enforcement agents with little to do, why not sit around and manufacture plots to justify those expenditures, giving a boost to their pro-surveillance ideology to boot? Media outlets have a responsibility to investigate the FBI’s claims, not mindlessly repeat them while parading their alarmed faces and scary graphics.

Now couple this with the vast tapestry of laws on the books in which the only victim is the state, the tens of thousands of cases of police brutality and misconduct over the least decades and the harnessing to a system in which the prosecutor gets away with everything in a fixed system of justice that favors the conviction of the defendant every time and you have a recipe for putting hundreds of thousands of Americans on parole, probation or in cages.

The FBI is the tip of the iceberg and the conversion of FBI HQ in DC and all its tentacled offices into homeless shelters and the cashiering of the entire agency would go a long way toward true justice in America.

But then again, prosecution is big business and it is yet another manifestation of the immorality of the state’s “just-us” system.

And don’t forget, NEVER talk to the police.

“The answer was Stellar Wind. The NSA would eavesdrop freely against Americans and aliens in the United States without probable cause or search warrants. It would mine and assay the electronic records of millions of telephone conversations—both callers and receivers—and the subject lines of e-mails, including names and Internet addresses. Then it would send the refined intelligence to the Bureau for action. Stellar Wind resurrected Cold War tactics with twenty-first-century technology. It let the FBI work with the NSA outside of the limits of the law. As Cheney knew from his days at the White House in the wake of Watergate, the NSA and the FBI had worked that way up until 1972, when the Supreme Court unanimously outlawed warrantless wiretaps. Stellar Wind blew past the Supreme Court on the authority of a dubious opinion sent to the White House the week that the Patriot Act became law. It came from John Yoo, a thirty-four-year-old lawyer in the Justice Department’s Office of Legal Counsel who had clerked for Justice Clarence Thomas. Yoo wrote that the Constitution’s protections against warrantless searches and seizures did not apply to military operations in the United States. The NSA was a military agency; Congress had authorized Bush to use military force; therefore he had the power to use the NSA against anyone anywhere in America. The president was “free from the constraints of the Fourth Amendment,” Yoo wrote. So the FBI would be free as well.”