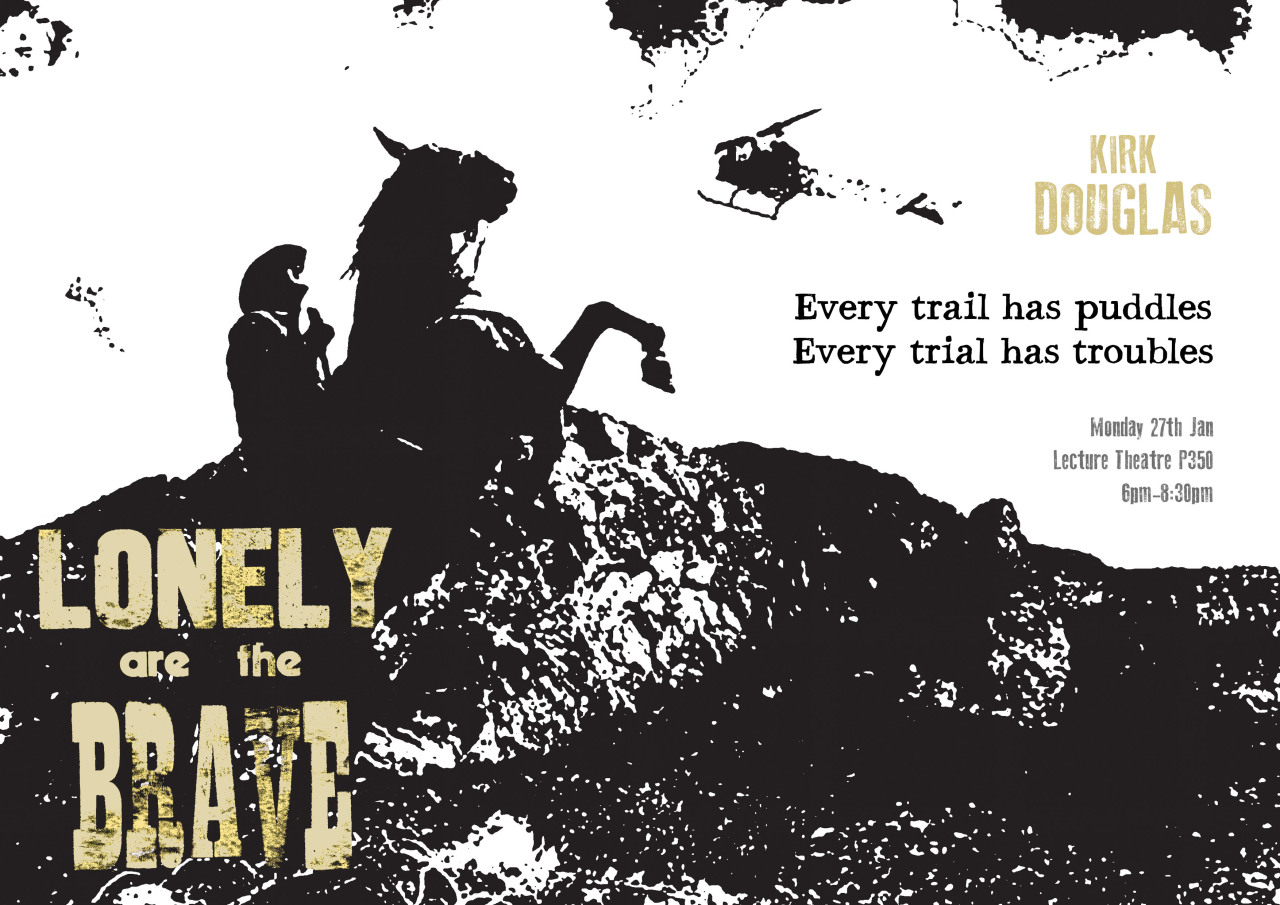 “But there ain’t many troubles that a man cain’t fix with seven hundred dollars and a thirty ought six.”

Publisher’s Note: Skip makes another appearance with a weapon inspired by one of our favorite movies of all time. I’m also impressed at the simple message before its time of the clear and clean vision of the conscientious objector in the film.And the simple but clarion recognition of self-ownership:

Desk sergeant: You mean to say you got no identification at all?

Desk sergeant: No draft card, no social security, no discharge? No insurance, no driver’s license, no nothing?

Jack Burns: No nothing.

Desk sergeant: Look, cowboy, you can’t go around with no identification. It’s against the law. How are people going to know who you are?

Jack Burns: I don’t need a card to figure out who I am. I already know.

I’d like to begin with my sincerest apology to Jeff Cooper, but the times are a changin’ while they’ve also stayed very much the same. Having grown up on Cooper’s many pearls of wisdom permeating America’s gun culture, one thing that increasingly prognosticates gun owners is the distinct possibility of a cavalcade of additional prohibitions on the citizens’ tools of liberty, codified with the distinct criminality of a militarized, nationalized, police state doing the bidding of the royals in Mordor on the Potomac. It’s been a decade since the passing of Cooper, yet the threats Americans face have been in motion for far longer, are intertwined with lies and deceit, have both government and bankster odors all over it, and would take volumes to delve into the why’s and what for’s… Suffice to say, if you are reading, you’ve already explored the voluminous ways freedom is in perpetuity encroached and want to know what’s next. If you are not actively developing a localized group of defensive capabilities, you are drastically behind the power curve and perhaps I may be of assistance in helping catch you up. It is my personal hope and prayer that it never comes to this, but if you do not consider it, remain flat-footed and see what happens. If a million gun owners were to be willing to stand in the Hot Gates, perhaps it would serve as enough of a deterrent that it never comes to pass, unlike the fate of Leonidas and his 300 Spartans.

The first time I watched the movie, Lonely Are The Brave, it never occurred to me the depth, perhaps the volume, no… the totality of just how much spirit Americans had sacrificed for safety, convenience and comfort.

Based on Edward Abbey’s novel, The Brave Cowboy, Kirk Douglas plays John W. “Jack” Burns. The man life couldn’t cage… but was it life that wanted to cage Jack Burns? No, it was the government. It was the feckless people who aimlessly wonder about spouting things like, “There ought to be a law…” It was the notion of civilization, modernization, a nation of laws that wanted to cage or kill Jack Burns, just for being the persona of a man that dares ask, what the hell gives someone the right to impose upon him? Later in his life, Kirk Douglas recalls this project as one of his greatest accomplishments and I’d have to agree with him. This movie personifies what men used to be in America.

Jerry Bondi: Jack, I’m going to tell you something. The world that you and Paul live in doesn’t exist. Maybe it never did… out there in the real world. And it’s got real borders and real fences, real laws and real trouble. And you either go by the rules or you lose. You lose everything.

Jack Burns: You can always keep something.

Spoiler Alert!: If you haven’t watched the movie, stop reading at this point and immediately find an unauthorized form of this movie and watch it post-haste, because I’m about to ruin it for you!

The focus of this essay is not to bring to bear some of the difficult ethical considerations, but the tactical ones Jack Burns chose, and mull over how certain choices we make or refuse to make could place us in comparable scenarios that would necessitate what I will respectfully refer to as a “Jack Burns Rifle”.

Now it might just be a cliché, but the best gun to have in a gunfight is the one you have on you. In this case, I’ll fast-forward the scenario to, like Jack Burns, you are trying to distance yourself from the threat who is intent on either caging or killing you, not live and let live like the fairy tales, but with the same disparate resolve as they do when burning a man out from cover or concealment as history has proven. Distance and kinetic energy delivery is all a dedicated attacker comprehends. Since most 5.56 carbine and 7.62 rifle calibers that will be raining various bullet weights and velocities, you need greater than an 800 meter (875 yard) constant and hopefully growing lead, while counter-tracking, hydrating, and contemplating an unlikely escape.

At this point, I’ll be shocked if the average gun owner hasn’t soiled their pants realizing what I’m writing about, because it makes me wonder if a modern-day Jack Burns were to attempt the same feat over the Sandia Mountains as done in the 1962 movie, I can’t help but pose most cop-sucking gun owners would be rooting against Burns for their double-thought worship of the blue line that they will eventually be hung from should they decline the prohibitionist War on Guns. See, unbeknownst to most Americans, the War on Guns has long been in a stalemate with the expiration of the Assault Weapon Ban in 2004, but with domestic terrorism and mass-shootings in daily view of the lowest order of cowering collectivist men in grossly soiled skirts, the War on Guns has recently begun new momentum with the unabashed purpose of expropriation (confiscation) by statists far and wide, and political party immaterial.

Who will collect those guns? Who will cause them trouble? What might their High Priority Targets (HPT) be and how much warning will there be so everyone caught unawares can run out and bury their Form 4473 guns so the Department of Fatherland Security can coordinate precision geolocation of their cache sites via hyperspectral sensors used in the domesticated military drone program? While America was watching NASCAR and drinking beer, and army of Trojan horses have camped out in every aspect of our lives. If these elements are not part of your Observe, Orient, Decide, and Act (OODA) Loop, you also are behind the power curve and need assistance catching up.

I would be remiss if I didn’t mention one of my many mentors and favorite writers, Kenneth Royce (Boston T. Party) and how he summed up the situation all the way back in 2001, in Boston’s Gun Bible:

We don’t need to read 900 pages of On Socialism by Von Mises to understand that our rights are being destroyed. We don’t need to read 1087 pages of Atlas Shrugged to comprehend that freedom is vanishing. What we need is the simple ferocity of any dog protecting its food bowl. It is inelegant, but it is ever effective! Americans have no ferocity, no teeth – and this former Rottweiler of a people is getting its food bowl picked clean by poodles and sparrows. Disgusting.

If you do not have even the mildest form of disgust or distrust towards your government, the bureaucracy, who like an army of pygmies are hard at work to dissemble the few freedoms you have left, you are the problem! Please Google Vidkun Quisling while you thumb for the See-Something-Say-Something number.

The task of pushing your elbow room beyond 800 meters, while climbing elevation and carrying the minimum of provisos requires a Jack Burns Rifle. I see it using commonly available calibers used for Western mountain game, likely chambered in 7mm Remington Magnum, or .300 Winchester Magnum, using heavier bullets because you will have better ballistic coefficient, retain kinetic energy farther, and will have less impact on your windage. A standard mountain rifle will do, however, shooting from sticks, using good glass, mounting the doping info shooting from the incline, level, and decline positions directly on the rifle stock, and the potential to reload faster using numerous 3 or 5 round magazines vs. one at a time will make it more effective. The Jack Burns rifle is light enough you don’t sweat to death carrying it, but heavy enough you can provide semi-precision fire all afternoon.

Other considerations: remove or paint all reflective parts, use a honeycombed kill flash, and a hand-held, lightweight, optical range finder monocular. It does not need to look like a sniper rifle because it doesn’t throw up collectivist flags if you are seen with it by the below-average hoplophobe. If you practice with it, train to hike the hills like you are being pursued, and can maintain greater than an 800 meter lead, you may crest the Sandia Mountains and live to never tell about it.

Now, go watch Lonely Are The Brave, and shop for a used, non-papered, quality rifle that won’t break the bank this time.