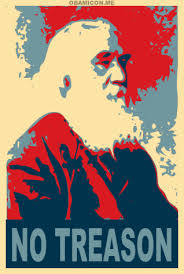 Publisher’s Note: 29 July was the death day for one of the inspirations for this site, William Wilberforce, who graces the masthead of this blog for many reasons. A tireless abolitionist and moral man of the highest water, he is the kind of spiritual apex I seek to emulate; absolutely relentless in his pursuit of freedom for the chattel slave and the termination of that horrific institution. Unfortunately, whether lack of moral imagination or the temporal constraint of the time he lived in, he suffered the same limitations of all 19th century abolitionists save one. He asked the right questions but failed to address the self-ownership issue to the man behind the curtain in the first place, the state.

Wilberforce and I propitiously share the same birthday, which happily coincides with the British burning of the Offal Office in 1814.

That single abolitionist who asked the questions to my satisfaction mining the very legitimacy of the state in a moral universe was Lysander Spooner.

I also suggest you listen to Prof CJ’s Dangerous History podcast on Spooner. Outstanding explication on the man.

You can find all his works in PDF here. I happen to be a lucky soul who owns the entire corpus of his works in a six-volume hardback collection. -BB

“The “National” system so called, is in reality no national system at all; except in the mere fact that it is called the national system and was established by the national government. It is, in truth, only a private system; a mere privilege conferred upon a few, to enable them to control prices, property, and labor, and thus swindle, plunder and oppress all the rest of the people.”

Lysander Spooner is the patron saint of this site. Months ago, I was amused to be with friends and at one point one of the fellows was haranguing us about “getting back to the Constitution”.  As if we ever left that wretched compact with leviathan government.  At one point, another worthy said that maybe we should pay more attention to Lysander Spooner.  Indeed.  For plenty of freedom advocates, it begins with Rand or von Mises or Rothbard and a host of other luminaries who saw through the collectivist sham. For me, Spooner was a primary gateway to abolitionism.

He proves your mind is the primary weapon against the state.

For others, Lysander Spooner is the strike of the match.  I was introduced to Spooner through a great book by the magnificent James J. Martin in Men Against the State. Among the several forgotten heroes from the 19th century, Spooner stands as a titan.  He made a rather interesting point concerning the Constitution in that he claimed that no document could bind a man if he is not an active signatory.  You can see where this would be rather problematic for a government and why the concept is roundly condemned in a court system staffed by robed government employees for whom honor and fidelity for justice will be observed as long as their masters approve.

Spooner is the gateway drug for maximum liberty and freedom.  If you pay close enough attention to his arguments and patterns of thinking, you come away thinking that the entire rotten collectivist project is not only desperately lacking in intellectual rigor but is founded first and foremost in an evil premise.  The premise of all collectivist and statist projects is initiated violence against ALL humans.  For the system would collapse if the fear of the monopoly of force were not the schwerpunkt of all actions from the enforcement of tax collection and aggression to the most banal of offenses, if one citizen not a member of the nomenklatura got away with it, revolution would follow shortly.

Fear and obedience is the brick and mortar of the state and the collectivists are the stonemasons.

In my Federal tax satrapy of Arizona, the Helots are obliged to stop at US Border Patrol suspicion-less checkpoints to establish citizenship bona fides.  On occasion, one must answer the question of your US citizenship status or you are detained.  If you simply drive through the checkpoint without stopping and ignore the pursuing revenue pirate’s flashing lights (you paid for through taxes), you will be subject to maiming or killing if you continue to disobey depending on your level of alleged resistance.  Cops are the clearest explication of what government is in all its naked glory, there is no more compelling example of what is wrong with government. Period. Police behavior is interesting in that their primary excuse is a Nuremberg defense that is applauded by rulers and Helots alike. The coproach is the pointy end of all politics and the palpable daily example of why the government must employ immoral means at all times to maintain and expand its power over the tax cattle it ranches.

Spooner would not approve.

As I have mentioned before, we are as much a nation of laws as Zimbabwe is the premier example of prudent fiscal and monetary policy.  The rule of law is a myth and all law is a slave to the ambition of the state. Nothing more and nothing less. You are a citizen of a nation that officially tortures, kills US citizens without a trial and uses a quaint fiction of democratic consent as the usual suspects drive the economy over a cliff with all the driving experience of a four-year old’s first navigation of a car.  The point is that a nation of laws is a misnomer.  No nation has or is presently not bifurcated with two sets of laws – one for the cattle in the tax jurisdiction and one set for the rulers who manage and administer the feedlot. If you doubt this, find the answers in this pop quiz:

Spooner has this whole system pegged and pinned down in the nineteenth century with an aplomb that still leave’s one admiring the breadth and depth of his achievement.  Of course, it is not common knowledge because the inclusion of Spooner in the pantheon of accepted American thinkers would quickly show the system for the evil and malignant sham that it is for freedom at the individual level.

An enterprising homeschooling curriculum developer could use Spooner’s command of logic and rhetoric as a sharpening device for young minds in the Truivium and Quatrivium.

“What was true of our ancestors is true of revolutionists in general. The monarchs and governments, from whom they choose to separate, attempt to stigmatize them as traitors. But they are not traitors in fact; in-much they betray, and break faith with, no one. Having pledged no faith, they break none. They are simply men, who, for reasons of their own — whether good or bad, wise or unwise, is immaterial — choose to exercise their natural right of dissolving their connexion [sic] with the governments under which they have lived. In doing this, they no more commit the crime of treason — which necessarily implies treachery, deceit, breach of faith — than a man commits treason when he chooses to leave a church, or any other voluntary association, with which he has been connected.”

In a fashion matched only by the pen of Murray Rothbard, Spooner makes the clear case for the immorality of fashioning a yoke on later generations without their consent and the concomitant evil and corruption that emanates from governments that practice this more subtle form of enslavement.

Randy Barnett, whose work on the Ninth Amendment is truly groundbreaking and liberty enhancing runs the lysanderspooner.org site at which most of his works are available free of charge.  We should be indebted to Dr. Barnett for doing this valuable service. The Ninth Amendment happens to be the only libertarian characteristic of the entire Constitution, most likely a bone to the Anti-Federalists who were clamoring and laboring to derail the big government doomsday machine known as the Constitution.

I would urge all my readers to set a goal for yourself to read Spooner on a weekly or monthly basis and make your way through his canon.  He not only was a great champion of liberty but provided a quite interesting and rigorous lesson in how to think critically on very complex issues and take them apart with alacrity destroying one statist artifice after another.. 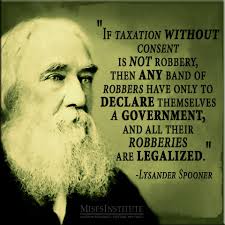 5 thoughts on “Spooner Lives! Monkeywrenching the State by Bill Buppert”