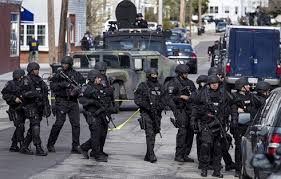 5 thoughts on “The Thin Black and Blue Line: Murder as Official Policy by Bill Buppert”