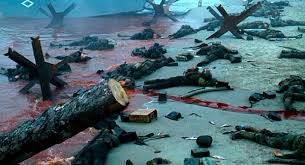 “But for Joseph Stalin, it was also a good war. From his pact with Adolf Hitler he annexed parts of Finland and Romania, and three Baltic republics. His armies stood in Berlin, Prague and Vienna; his agents were vying for power in Rome and Paris; his ally was installed in North Korea; his protege, Mao, was about to bring China into his empire. But it was not so good a war for the inmates of Kolyma or the Russian POWs returned to Stalin in Truman’s Operation Keelhaul.”

Today is the 71st anniversary of D-Day. My father soldiered in WWII toward the end of the conflict and with the advent of VE Day in April 1945, was getting ready to ship to the Pacific to invade mainland Japan. Fortunately, that got turned off and he instead exercised Patton’s horses in Germany and returned to the states in one piece. Almost. The experience rippled through his life until he died in 2013.

Like all wars, the US government used this as an opportunity to pile on confiscatory tax measures and other population control measures that far outlasted the actual hot war. This would include Milton Friedman’s income tax withholding.

“However, both sides agreed on the need for high taxes (along with heavy borrowing) to pay for the war: top marginal tax rates ranged from 81%-94% for the duration of the war, and the income level subject to the highest rate was lowered from $5,000,000 to $200,000. Roosevelt tried unsuccessfully, by executive order 9250, to impose a 100% surtax on after-tax incomes over $25,000 (equal to roughly $340,721 today). However, Roosevelt did manage to impose this cap on executive pay in corporations with government contracts. Congress also enlarged the tax base by lowering the minimum income to pay taxes, and by reducing personal exemptions and deductions. By 1944 nearly every employed person was paying federal income taxes (compared to 10% in 1940).”

The American political world after WWII or the War to Save Josef Stalin to more accurately identify why the conflict took place, used the “Communist menace” to buttress the incredible growth of the American and Western European state; ironically emulating many of the worst aspects of central planning and citizen control. At least the French, British and Italians were honest enough to have significant voting blocs of self-avowed communists in their countries while the same were hounded in America despite the child-like reverence for the power of the state demonstrated by both major parties in America. Ironic that the Soviets had penetrated the Roosevelt White House so thoroughly in WWII. As the Democrat party started to evolve into the Socialist International after 1968 and the Grand Old Politburo stumbled behind with its incoherent statist/progressive agenda, the US became the Olympic Gold winner in the new era after the USSR simply just fell apart in 1989-91 getting the Silver Medal to build the bigger state.

WWII gave America the withholding tax, rationing, perceived legitimacy of Keystone Keynesian economics, price controls, imprisonment for biology and genetics and the nationalization of the economy. It provided the gargantuan life support to the brutal and homicidal regime in the USSR and the means to use that regime’s post-WWII ambitions to start building a welfare/warfare state in the West that would outlive the foe that gave it life. The war would give every usual government supremacist the ultimate wild card to expand government – national security.

Operation Tiger on 28 April 1944 was a portent of the slaughter to come on the beaches of Normandy by the German forces defending the beach. The unblooded Eisenhower would order live fire at teh beaches of England used for the rehearsals. It would be costly.

“Now, the idea was that the shelling would stop very, very shortly before the American soldiers came onshore, so that the wreckage of war would still be around,” Milton said. “The smells of war, the sounds, the shell-blasted beach would be there. But there was a terrible mix-up of timings, which meant that as the American soldiers came onto the shore, the British were still shelling the beach. [This] meant the Americans came under devastating friendly fire from the British.”

Within minutes, 300 more American troops were dead. Gerolstein helped ferry some of the wounded to the hospital.”

Fortunately, more Americans would perish on the English beach than “Utah” on invasion day. When the whole affair was over, close to a thousand American troops were dead. Such was the martial talent on the eve of actually engaging Axis forces on the Continent.

The greatest generation is true in one respect; the war created and generated the paroxysm of giant centrally planned states that quite literally made the plantations of old look quaint and pastoral. These cancerous big government confabs consumed individual liberty and freedom to the point of regulating every human transaction in existence, East and West.

7 thoughts on “D-Day 1944: Another Expiration Date for Western Individual Liberty and Freedom by Bill Buppert”