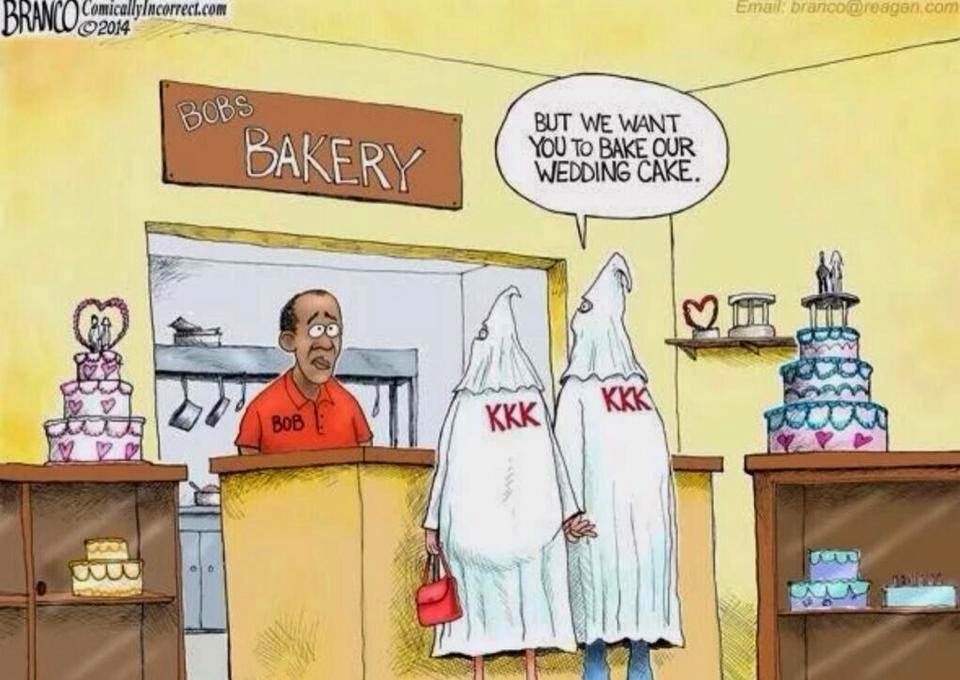 Publisher’s Note: Paul is a personal friend and wrote this splendid riposte to yet another state-created crisis in freedom of association that is the latest tempest in a teapot for the usual suspects in the government supremacist commentariat. -BB

Much has been made as of late, about the awful crime of discrimination in regards to one baker refusing to sell a cake to a gay couple.

The left bemoans the situation as the horrid “crime” of discrimination, while the right claims it is within the purview of their “constitutional right” to religious freedom.

I personally think that both sides, yet again, miss the forest for the trees. As a libertarian, I view the ensuing argument as a means of private property and will pose it to both sides as such.

First of all, it is not a crime at all as no one is hurt. Sure those that get denied service might have their feelings hurt, but they are no worse off after this denial then they were before it. No one has been victimized, thus no crime has occurred.

Forcing one to trade their property, without their consent, actually victimizes the one in which forced was used to remove their property. If anything, the forceful overseeing of an involuntary trade deal is the crime.

While I think it a bad economic decision to turn away customers, in a consumer based business, I cannot even imagine thinking about legislating people against making bad decisions that harm no one other than themselves. After all, in a free society, people should be free to make what others may view as a bad decision. Nor can I see why anyone would want to force others to sell them, their property if someone else doesn’t like them, for whatever reason. Not only does it seem awkward, but nonsensical to force someone to make you food. I wonder what kind of “frosting” is going to go onto that cake.

If you truly feel wronged by this, then use the market to rectify it. I personally think the refusing baker, just gave the gay couple a winning niche in the market place, as I am willing to bet, that per capita, gay couples would spend more money on cakes than straight couples.

But let us take this argument one step further. Dating and sexual relationships take place on this planet by the 100s of billions every day. Let us now carry out “discrimination” and forced association into this realm. Should one not be able to turn down a potential suitor for any reason they choose? If let’s say, I find a black woman attractive and she doesn’t find white men attractive, and turns me down based up this notion, whether real or perceived, should I then sue to force her to date me? What if I find a lesbian attractive and she wished not to exchange her time or her body with me because of my alternate (to hers) sexual orientation? Should I be allowed to appeal to the baton of the state to force her to do so?

I fully understand that the “legal” basis for this argument is that it is a business exchange and the Civil Rights Act forbids anyone engaged in business to the public from turning down services to people based up their age, race, gender and now sexual orientation.

So how does this play out in the arena of legal prostitution? I posed this question in a debate forum largely dominated by liberals; “Should a woman be forced to have sex with any or all paying customers, based upon their age, gender, race or sexual orientation”. The response from most was a resounding NO. One debater, realizing the trap I had laid for them, had posted “it’s a trick, run away”. But when I reminded them of the Civil Rights Act and the exact same similarity to the baker’s case, almost every single one changed their answer from “No” because that would be rape, to “Yes” because that is what the law stated. And there you have it. If rape were “legal”, most on the left would not object to it.

I also have to wonder, that if a Muslim were to turn down a Christian, simply because he was an “Infidel”, what the reaction of the Right would be. They never seem to fail to understand the Pandora’s box they open against themselves when they try and successfully invoke the baton of the State in regards to religion and forced associations.

The answer in all cases above is obviously NO, as it violates the personal property of one for the benefit of another, against one’s will. Governments have no right to force people to trade their property with another, nor does it have the right to confiscate ones property and give it to another without their consent for any reason beyond restitution for an actual offense upon another.

It’s not about a cake, it’s about State-sanctioned rape.