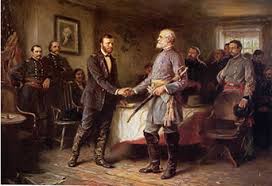 “So far from engaging in a war to perpetuate slavery, I am rejoiced that slavery is abolished. I believe it will be greatly for the interests of the South. So fully am I satisfied of this, as regards Virginia especially, that I would cheerfully have lost all I have lost by the war, and have suffered all I have suffered, to have this object attained.”

On this day, 9 April in 1865, the Lincolnian project to enslave the entire nation under the yoke of Union supremacy, central planning and a country administered by national political fiat and the naked fist of government aggression prevailed. The South and the Confederacy for all it flaws died at Appomattox.

Lee is often erroneously quoted as saying the following:

“Governor, if I had foreseen the use those people designed to make of their victory, there would have been no surrender at Appomattox Courthouse; no sir, not by me. Had I foreseen these results of subjugation, I would have preferred to die at Appomattox with my brave men, my sword in my right hand. Supposed made to Governor Fletcher S. Stockdale (September 1870), as quoted in The Life and Letters of Robert Lewis Dabney, pp. 497-500.”

No lesser literary luminaries and historians have said this is false than Douglas Southall Freeman, Shelby Dade Foote, Jr. and Bruce Catton. This appears to be historical myth-making by Mr. Dabney. My casual research and interest in Lee find this simply does not fit in his character; now there were certainly Confederate worthies who professed such sympathies.

Lee is certainly one of the greatest captains of arms in the history of the West. A far more competent and talented warrior than the base incompetency and abject martial malpractice of George Washington; he joins the ranks of Douglas Haig (WWI) and Pompey (Rome) for an exaggerated sense of warrior skills untethered to reality. Lee was at the forefront of a Confederate high tide that was destroyed by the Gettysburg debacle and worsening political travails in the South as Davis tried to emulate the Sovietized system of the Union to salvage a victory.

At least the South fought to fight a just war in defending their own soil from invasion. I am amused at Union apologists who claim that the South fired the first shot at Fort Sumter. Let me employ a tortured analogy; you buy a house and the owners refuse to vacate and bring friends with guns to ensure you can’t possession of your rightful property. Such was the case in Sumter where the Fort commanded the entry and exit to richest transportation hub in the south employing constant threats against the indigenous community it sat in the middle of. As my friend Paul Bonneau points out: “…that by retaining ownership of Sumter and attempting to collect the excise tax this in itself was an act of war.”

The War Between the States was a Second American Revolution, the last gasp of trying to unshackle the nation from the Constitutional straitjacket that extinguished liberty at every turn. Alexander Stephens, the Vice president of the Confederacy had other ideas. He is no hero of abolition nor a moral man in regards the disposition of humans in chains:

“Our new government is founded upon exactly the opposite idea; its foundations are laid, its corner- stone rests, upon the great truth that the negro is not equal to the white man; that slavery subordination to the superior race is his natural and normal condition. This, our new government, is the first, in the history of the world, based upon this great physical, philosophical, and moral truth.”

Lincoln claimed this was his only disagreement with Stephens but the curious ability of Lincoln to free all slaves outside his legal jurisdiction and maintain it within his control regime. Historian Clarence Carson has astutely commented: “It should be noted, however, that as of the moment it was issued and to the best of Lincoln’s knowledge, the proclamation did not free a single slave. It did not free a slave in Maryland, Delaware, Kentucky, Missouri, West Virginia, nor in any state or portions of a state within the Confederacy occupied by Union troops…In short, Lincoln freed only those slaves over which he had no control. No doubt that was by design.”

As Al Benson Jr. notes: “What it amounted to was, that, as an effective propaganda tool, the proclamation freed only those slaves that the North had no jurisdiction over and it didn’t free any slaves over which the North had some jurisdiction.”

Author Webb Garrison, a former dean of Emory University noted that: “…the Emancipation Proclamation was a war measure – not an edict issued in a dramatic move to better the lives of blacks. No one knew this better than the author of the proclamation. Nine months after it was issued, he told Salmon P. Chase ‘The original proclamation has no constitutional or legal justification except as a military measure’.”

There was no major politician except Charles Sumner on either side interested in the least in emancipation much less abolition of black chattel slavery. Sumner would famously ask Lincoln: “Do you know who is at this moment the largest slaveholder in the United States?” Sumner informed Lincoln that he was the largest slaveholder because the President “holds all the slaves of the District of Columbia.” This ended on paper in 1862.

This war was about slavery but not in the commonly held beliefs that permeate the nonsense about the conflict in the government school systems. This war was about the Union grasp at codifying a new kind of slavery just as awful as chattel or indentured servitude. The object was to chain tax cattle to a regime that could rob them at will and ultimately using every power at its disposal to drain a person’s resources and at worst cage and murder them when it saw fit.

The essential result of the horrific conflict was to put everyone on the plantation under any Constitutionally protected” territory or state.In the end, slavery was a contextual sleight of hand by political means to codify who would be owned by the state in what fashion.

Go guerrilla indeed, what would the future have wrought?

I leave with the lyrics of the splendid homage by Unreconstructed Rebel to Reconstruction after the war.

Oh, I’m a good old Rebel,
Now that’s just what I am;
For this “fair land of Freedom”
I do not care a damn.
I’m glad I fit against it-
I only wish we’d won.
And I don’t want no pardon
For anything I’ve done.

I hates the Constitution,
This great Republic too;
I hates the Freedmen’s Buro,
In uniforms of blue.
I hates the nasty eagle,
With all his brag and fuss;
But the lyin’, thievin’ Yankees
I hates’ em wuss and wuss.

We got three hundred thousand
Befo’ they conquered us.
They died of Southern fever
And Southern steel and shot;
And I wish it was three million
Instead of what we got.

I can’t take up my musket
And fight’ em now no mo’,
But I ain’t a-goin’to love’ em,
Now that is sartin sho’;
And I don’t want no pardon
For what I was and am;
And I won’t be reconstructed,
And I do not give a damn.

19 thoughts on “The Fall of the South: A Sesquicentennial Wake By Bill Buppert”