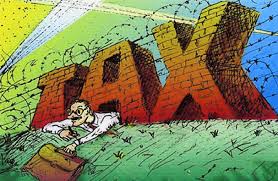 Publisher’s Note: Just a note that I quote Reagan for one of his few sober thoughts on economics because while he talked a good game, he was no more fiscally conservative than any of the Presidents following Eisenhower and succeeding him in office in 1989. I will give Reagan his due for reducing income tax rates from a high of 70% to 28% but no closer to zero than my comfort zone for taxation.

Eisenhower managed to reduce government spending per GDP by two percentage points, not Reagan who spent absurd amounts of other people’s money and popularized deficit spending for the voter mobs. I highly recommend The Great Deformation by former Reagan advisor David Stockman for a fairly thorough analysis of the fiat currency and bankster chaos that has consumed the American economy for the better part of a century. I don’t agree with all of Stockman’s conclusions and his continuing faith in the “right” regulatory regime is quaint but illusory in application. -BB

Taxation is theft and the acquisition of other people’s resources with a velvet glove backed by a mailed fist. It is simply one of the many ways in which the state brutalizes and impoverishes its tax cattle on a daily basis. Despite the government-media complex insistence that the tax rate in America is tolerable if not fair, anything above zero is morally wrong if the robbed don’t agree implicitly and consensually to the mugging for whatever fantastic services the state proclaims it provides.

The French aren’t the only ones to achieve a 100 percent tax rate, they’re just more blunt about it.

So I want to destroy a myth, I want to show you through sheer numbers and data that the state in America has a tax rate that exceeds 100% to which the normal American having had a proper government education will insist that is impossible.

I’d like to excise some of the population that is obviously at this point. Now the tax rate for incarcerated Americans is exactly 100% since their lives have been stolen in total. The tax rate on certain targeted marijuana businesses in the US under IRS code 280E are taxed in excess of 80% (some approaching 100%).

“I believe that the feds extend the drug war through 280E,” said Cornelius. “If (the federal government) can’t put them out of business legally when voters are mandating these businesses to move forward, it’s very easy to put them out of business financially. A lot of times, instead of paying a tax rate that should be 30 to 40 [percent], they are paying rates between 80 or 90 percent. I even have a client right now that is paying more than 100 [percent] effective tax rate.”

Apart from the sheer moral hazard and absolute immorality of the aforementioned cases, I would suggest that all Americans pay an effective tax rate that exceeds 100% even though that beggar’s belief and rational thought but we are talking about the government.

Direct taxation in America on the Helots residing within and without the US and its territories is enormous and takes on many tangential impacts. “The United States is the only country that taxes its citizens’ worldwide income, even when those citizens live indefinitely abroad.”

An ordinary US subject will pay Federal, state (43) and/or city income taxes, property taxes, excise taxes, sin taxes, sales taxes, Socialist Security, Medicare, unemployment and corporate income taxes. I have given a brief overview of most progressive taxes and there are regressive taxes like the gasoline tax that the Feds are gnashing their fangs over since prices have gone down and they were foolish enough to assign a percentage of price instead of flat fixed levy.

Then there are the death taxes to pay a gratuity to the state(s) per the required death levy once the owner has assumed room temperature and you are taxed once again on monies that have already had taxes stolen from the whole. This tax is 18-40% on previously taxed assets.

Of course, there are the beloved sales taxes. “As of January 1st, 2014, 5 states (Alaska, Delaware, Montana, New Hampshire and Oregon) do not levy a sales tax, while California has the highest state tax rate at 7.5%.” Now, the New York City local sales and use tax rate is 4.5 percent. City and state sales tax combined is 8.875 percent, so your mileage may vary. The five states with the highest average combined state-local sales tax rates are Tennessee (9.45 percent), Arkansas (9.19 percent), Louisiana (8.89 percent), Washington (8.88 percent), and Oklahoma (8.72 percent). These do not include the additional imposts added on by municipal and county predators, which make the total approach 10%.

Then there is the widely reviled property taxes imposed on real estate which means that in America you never own your property, the King does. The top ten offenders offer tax theft as high as 1.89% (NJ) on the “assessed valuation” by the King’s assessors on your castle. You will note that your local serf-administrators play interesting games with valuation in a price downturn in the real estate market. Most of the loot derived from this scheme goes to the government education system to recycle the government supremacist nonsense that grows future homeowners convinced that the tax scheme is right and just.

Did I mention the varied licensing and registration taxes for vehicles and boats?

Investment taxes are another burden for those who think they can divine some income or wealth from pursuing capital. Peak on dividends is as high as 44%, capital gains as high as 24% and you must tax on interest rolled into gross income.

The next layer of the grand theft scheme is the corporate income tax is imposed at the federal level on all entities treated as corporations, and by 47 states and the District of Columbia. Generally, taxable income for a corporation is gross income (business and possibly non-business receipts less cost of goods sold) less allowable tax deductions. At the Federal level, this impost produces a flat 34% tax rate on incomes from $335,000 to $10,000,000, gradually increasing to a flat rate of 35% on incomes above $18,333,333. This can be as high 38% at the Federal level but for the sake of simplicity, we will call it 34% according to the government’s own spokes-mandibles. But this rises to a median of 39.1% when median state tax rates are included.

“These include taxes on income, payroll, property, sales, capital gains, dividends, imports, estates and gifts, as well as various fees. In 2010 taxes collected by federal, state and municipal governments amounted to 24.8% of GDP. In the OECD, only Chile and Mexico taxed less as a share of GDP.”

This does not include state predations on the corporate entities unfortunate enough to do business in America, which ranges from zero to 12%. California and New York are now crafting devastating tax rates that will enter the double digits for corporation doing business in those states.

So let’s disabuse one important point; corporations never pay taxes and not in the righteously indignant social protest nostrums of the economic illiterates in Occupy or the other socialist apologist organs scattered across the fetid plain. They can’t pay them because they sell goods and services to consumers so every time you hear someone in the Keynesian moronathon talk about corporations paying their fair share, it is economically impossible. The consumer pays the income taxes in higher prices for goods and services.

So in essence that is a 39% levy on consumers on top of everything else they have paid.

We’re not finished. Not by a long shot.

The new National Socialist healthcare scheme foisted upon the republic by Democrats and Republicans alike known as Obamacare imposes a whole new raft of taxes and penalties that have yet to be divined in their individual impact on the unfortunates who possess American citizenship. So I won’t even guess but be warned that whenever the government claims they will save you money, grab your wallet.

Sin taxes are also a mighty cash cow for government bureaucrats to extract more monies at the point of a gun. Look at this chart on cigarette taxes and you see an outrageous total tax impost on consumer items. New York levies a penalty of $4.35 to purchase a pack of cigarettes. Spirits taxes are similarly outrageous in the net amount for the item purchased. None of these include the BATF imposition of taxes at the producer level before the states get their tentacles in your wallet. Which brings me to a critical point on the interposition of corporate income tax and all of these value added taxes. Any notion you have heard that America has no Value Added Tax (VAT) is simply misdirection and illusion.

Understand that beer, pencil or television you purchase is taxed again and again at every juncture of production from removal of raw material from the earth to finding it on the shelf at the store; every transaction is taxed by the Feds and the state. Every time it leaves a warehouse to go to another one. Did I mention the Feds impose an inventory tax on goods in warehouses? The states are murderous in this levy, ask your local auto dealer.

Better men than me have done the math on the non-funded liabilities and the funded debt of the Federal government. That 18 trillion dollar amount is the acknowledged Federal debt subject to the same incredulity as everything the government tells you. The actual liabilities that the US Federal government has signed on to in snake oil promise after promise of new giveaways stolen from future generations to others is anywhere from 127 trillion to 210 trillion and rising as politicians promise ownership of things they don’t own and distributing the stolen loot.

I am certain I have missed some taxes that I have yet to discover. I have not discussed the two items which take us over the top of the 100% impossible hurdle which seems so unlikely and outlandish: funded debt and the cost of Federal and concomitant state regulation and choking of the above-ground free market in America and by extension any US holdings planet-wide. Funded debt is the quaint notion where the government through implied consent uses its tax cattle population and their production of goods and services as unsigned collateral for taking debt or printing fiat currency. I will cover those in the second part of this inquiry.

Federal regulation alone while incredibly difficult to extrapolate certainly stymies growth in very demonstrable way and places a veritable sea anchor on the entire economy’s forward momentum. The new NAM/Crain and Crain study places this burden of absolute loss at two trillion dollars. This is an indirect tax on every American Helot. Average cost to all manufacturing sector jobs per capita is approximately $20,000 per annum. None of this calculates the dead weight drag of a unionized government “workforce” legendary for sloth, indifference and inefficiency.

Did I mention inflation and fiat currency and the most insidious tax of all?

The First American Revolution had a number of contributing vectors for igniting among which was a tax burden on colonials of approximately three percent. I think I have established that in the end, American taxation as a whole exceeds 100%, as impossible as that may appear.

I am certain that readers will alert to any government theft or robbery I have neglected to mention.

If the time to stop the madness has arrived, you haven’t been paying attention. It started a long time ago.

Slavery never ended, the terms of employment changed for the quaint institution.

America is too big to succeed at anything but tyranny.

“To compel a man to furnish funds for the propagation of ideas he disbelieves and abhors is sinful and tyrannical.”
― Thomas Jefferson 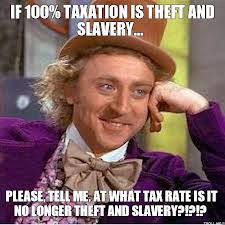 28 thoughts on “Worse Than Zero: The American Tax Burden Exceeds One Hundred Percent By Bill Buppert”