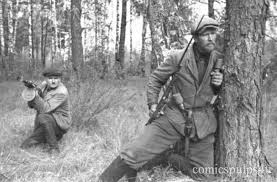 “The enemy will pass slowly from the offensive to the defensive. The blitzkrieg will transform itself into a war of duration. Thus, the enemy will be caught in a dilemma: He has to drag out the war in order to win it, and does not possess, on the other hand, the psychological and political means to fight a long, drawn-out war.”

– Robert Taber, The War of the Flea

The DoD and the Army have now inaugurated yet another iteration of the constant doctrinal battle to balance irregular warfare and conventional warfare. Since the beginning, the US armed forces have struggled to deliver on a force concept that could do either or both well. As William Lind has pointed out eloquently, the US and western powers have enunciated the generations of warfare, but failed to deliver on advancing through the sequence or even gleaning the wisdom they hold.

There are four generally accepted generations of warfare, and the succeeding generations that provide grist for the mill among the defense intellectuals and military-industrial illiterarti who constantly tilt at the next big thing. For the purposes of this introduction, we will stick to the four generations commonly accepted.

First Generation Warfare began at the Treaty of Westphalia in 1648 where a convention of European armies and heads of state decided a civilizing residual of warfare should formally prohibit the engagement of non-combatants in warfare throughout the continent. This, of course, did not obtain in the planetary battlefields these European powers would fight on in pursuit of broader imperial colonial portfolios for their respective empires. The implication was to conventionally engage armies force on force with limitations and prohibitions on the destruction of civilian persons and property where possible. The armies of Lincoln would abandon this concept wholesale in 1863, and the two hundred years preceding would be filled with identifiable ignorance or willful neglect of the concept.

Second Generation Warfare would see the paradigm of fixed attrition conflicts come to the fore, with the mightiest stalemates occurring on the European continent during WWI, but with hints of the mode of conflict evident during the American Civil War in the first three years of the conflict.

Third Generation Warfare would see the maneuver conflict in both the direct and indirect application start to appear with greater frequency, starting with the nineteenth century. The German combined arms blitzkrieg concept borrowed heavily from a variety of previous influences. The German General Staff even studied the cavalry maneuver practices of Jeb Stuart and Nathan Bedford Forrest in the American Civil War to operationalize speedy applications of the direct and indirect approach. The direct approach would usually entail the probing of weaknesses on a broad front and capitalizing on these for thrusts through the unitary body of an enemy. Liddell-Hart’s indirect approach would leverage flank and rear attacks in rapid exploitation. Erwin Rommel would go on to use both to devastating effect in the early African campaigns of the Wehrmacht in WWII or, more accurately, the War to Save Josef Stalin..

This is not to say that these Third Generation events did not take place in ancient times. One can suppose that all amphibious operations, whether successful or not, are by nature Third Generation.

The twentieth century saw force multipliers in two aspects for maneuver warfare that former commanders of the ages did not have to the degree the world beheld in this last century. Man portable communications, training and rehearsal for the combination of various military disciplines into a cohesive and adaptive whole, revolutionized the operational and strategic aspects of war in the second half of the twentieth century. The Germans showed hints of this in 1918 but operationalized maneuver doctrine at the theater level to an extent no Allied forces matched until 1944.

Fourth Generation Warfare, for the purposes of this discussion, has two primary elements that may or may not attend each other. This is the irregular fight on the other side of the conventional spectrum, and the role of the non-state actor in warfare.

This last is the fight that has occupied the Western military mind for the past quarter century and caused the extraordinary investment in experiments in unconventional conflict and counterinsurgency. All of which have failed as the US and the West expended trillions of dollars in the SW Asian theater in Iraq, Afghanistan, Yemen and Libya, without quite Grokking the importance of indigenous rebellion and how it becomes a perpetual motion machine for maintain seditious momentum, the critical importance of the mass base as a fulcrum, and the unsurprising lack of adaptation on the part of the West when faced with multiple fronts of threats and enemies who seem to subside and resist in a continual wave that confounds the best minds in the American military.

Robert Taber explains this brilliantly from the vantage point of 1965. Not much has changed:

“Whether the primary cause of revolution is nationalism, or social justice, or the anticipation of material progress, the decision to fight and to sacrifice is a social and a moral decision. Insurgency is thus a matter not of manipulation but of inspiration.

Their picture is distorted because their premises are false and their observation faulty. They assume–perhaps their commitments require them to assume–that politics is mainly a manipulative science and insurgency mainly a politico-military technique to be countered by some other technique; whereas both are forms of social behavior, the latter being the mode of popular resistance to unpopular governments.”

These are the generations in a nutshell, and library shelves of neglected and unread articles and weighty tomes on these subjects have (had) shelves groaning under the weight or in more modern times, tens of millions of digits in the blogosphere devoted to it.
Part of this miasma is the strategic deficit disorder that has stymied American and Western supremacy since the collapse of the bipolar world meme in 1991. This, of course, is shifting again as an eerily familiar bloc of antagonist nations is forming around a renewed Sino-Russian rapprochement and other countries uneasy with the military bullying and blustering of the American state. COL John Boyd, the discoverer of the OODA Loop and one of the most brilliant minds in Western strategic thought, distilled strategy down to two distinct arenas from whence everything else portends: alliance and isolation. The US, and to a lesser extent NATO nations, has used a keen technological edge as a substitute for martial mindfulness and elegance of craft in both conventional and irregular encounters.
Though most suffer from institutional amnesia and historical bureaucratic inertia, some defense observers are calling the ball and proclaiming that the resistance forces in both Afghanistan and Iraq have achieved a strategic stalemate if not victory over the latest Western military interloper. And the response from the more benighted intellectuals is a call for a return to American conventional savvy in the scheme of arms.

What has been called AirLand Battle and then Full Spectrum Operations has become Unified Land Operations (ULO) to better prepare the American forces that have allegedly been mired in unconventional operations for so long they have lost their conventional edge. From a Third Generation perspective, this is true. Both Bill Lind and I agree that excepting naval operations in WWII, especially in the Pacific Theater of Operations, no maneuver concept at the strategic level occurred despite protestation to the contrary. During the entirety of the conflict in WWII, four-fifths of all German Order of Battle was oriented against the main enemy in the East, the USSR.

The American armed forces have been a Second Generation conceptual war machine since the American Civil War, and not much has changed. I was raised on the FM 7-8 Infantry Squad and Platoon, which was replaced by an even bigger manual in the 21st century. A casual observer of the fight in the Middle East in this century by American arms would suggest that the printing presses should stop publishing such nonsense and simply issue a laminated 3×5 card to every infantryman that reads simply Call for Fire.

There is very little grasp or leveraging of light infantry maneuver and the application of the indirect approach except for the ubiquitous applications of thousands of rounds of munitions to eliminate one human threat. The Taliban and the Haqqani Network and hundreds of resistance organizations scattered throughout Afghanistan have thrived and multiplied under the debt carpet-bombing of trillions by the Western military industrial complex to crush a rebellion that is still alive and well. Exhibit A is the evaporation of the very expensive post Hussein Iraqi army at the hands of the road-borne light infantry threat of the IS or ISIL. In itself, an unexpected send order effect of arming and training guerrillas to harry the Syrian dictator. A dozen years and trillions of dollars in American mentorship, and the vaunted Iraqi army folds under the slightest pressure as it is hollowed out by irregular Fourth Generation forces.

As an aside, it would be wrong to assume that these generations of conflict have a sequence of evolution. Can different generations be contemporaneous or occur independent of one another? Of course they can. The historical examples abound. One can surmise that Napoleon was not defeated by Wellington at Waterloo in 1814 in a Second Generation fight without considering the importance of the French and Spanish harrying and raids on Napoleon’s lines of communication throughout the conflict, which significantly weakened what Napoleon could bring to bear in the end at Waterloo. This was most certainly the confluence of Second and Fourth Generation methods that led to wholly unexpected consequences. One can look at the littoral conflict at Bletchley Park trying to break the German Enigma code celebrated in the recent movie on Turing, The Imitation Game.

American arms and the military machine emanating out of DC have a curious reputation. Vaunted as the most powerful and technologically sophisticated military on Earth, yet consistently bested by irregular forces in all but the instance of the brief and strategically limited Gulf War in 1991. Yet even that war was simply a harbinger, like WWI of WWII, of worse things to come.

This provides a framework for the intellectual deep dive in future essays on the implications of Fourth Generation Warfare.

Think American arms are the historical equivalent of the Terminator? Think again.

“Yet the hokum of enlightened counterinsurgency generals who turn failed wars around by making their armies fight them better simply won’t go away.  The hokum helps to prolong the fantasy that American wars in foreign lands can always be made to work as long as the “professors of war” at the graduate level are put in charge.  Sadly this is a recipe for perpetual conflict.”