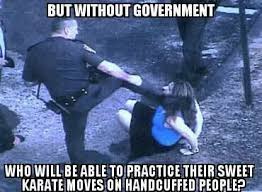 “What difference does it make to the dead, the orphans and the homeless, whether the mad destruction is wrought under the name of totalitarianism or in the holy name of liberty or democracy?”
Mahatma Gandhi

I have spent many years writing and railing against the police state with far more competent observers like William Grigg providing a veritable cornucopia of evidence showing why police and American policing is an existential threat to any individual liberty it gets near.

Here and now, the police authorities in the US pose a similar threat to individual liberty that the British military regulars did in North America before 1775. The “redcoats” are now bluecoats.They mean to force all societal change at the point of a gun, no less than the Marxist thuggery that authored planet-wide hell-holes in the 20th century.

These are the Jacobin vanguard and the Communard revolutionaries in new garb. When some of the National Socialists held their heads in shame at the conclusion of the War to Save Josef Stalin to proclaim that “orders were orders” did not necessarily absolve the dishonor of what they had visited on their countrymen; this same notion is the instant response by any serving cop in America. We don’t make the law we enforce it. These are the same men that would have gone after runaway slaves, maimed and killed illegal alcohol distillers and simply done what they are told. That they are held as heroes by the government-media complex tells you exactly the moral compass of the news parrots and the state they fellate on a daily basis.

Cops will do what they are told and they will kidnap, cage, maim and kill you depending on the level of resistance of the Helot assaulted. Police in America are the revolutionary vanguard of a violent state power emanating from DC that will stop at nothing to rob, regulate and, if necessary, murder anyone who defies the law. Anyone. They murder men, women, children and animals with alarming frequency and get away with it. Few face the music as a mundane would if charged with a similar crime.

In essence, it is a Federalized police force to the lowest level granted special immunities and protections for doing the state’s dirty work. While there is a secret police functionality in America with the intelligence community providing data it instructs to be laundered for pursuing arrests and convictions, the not-so-secret police continues to behave as a paramilitary occupation force across the fetid plain.

The trifecta of officer safety, qualified immunity and police unions have combined to create the toxic environment every American suffers in now. The Nuremberg Defense has become the primary reason for all American policing; while Germans hung by the neck until dead for this absurd moral agnosticism, the police are lauded as heroes and sage protectors by the American media that fellates them on a daily basis and provides excuses for the barbaric behavior that they practice daily.

The American concept of policing has become perhaps the purest representation of Marxism in the West with the attendant virulent Leninist attitudes that adorn the armed government employees’ sense of self. The Russian and Chinese concepts of Marxism created some of the largest corpse-piles in recent history. These government supremacist bastions relied on might is right and the “rule of law” in a fashion that brought both to their logical conclusion.

I have always been amused by the likes of the diminishing but overfed hordes of autoworkers and teachers and other union employees who did everything in their power to prevent capital from doing its best and always running to the government’s skirts for protection. These unions have done enough harm by contributing to the decades long mediocrity of automotive manufacturing in the US and the enstupidation of entire generations of young minds respectively. What would happen if they had been armed and given a hunting license by the government to quite literally get away with mayhem?

Immoral means can never yield moral ends yet this is the daily modus operandi of the government. This is the precise calculus that informs one of the most inflated and over-rated notions in western history, the rule of law. The rule of law within government confines only applies to non-government employees since the praetorians and imperial bureaucrats are immune to this rule.

If you doubt that, take a look at the emerging surveillance and national security state. But one does not have to look that far. Look at your local “law enforcement’ entities preening and waddling around your local burg. These normally obese uniformed thugs literally have a license to maim and kill. They are always held to a different standard in case after case and even in the prison system if they find themselves on the other side of the cage bars are usually granted separate privileges. They investigate themselves.

Absent the police, no politician could strip or diminish one citizen of their liberty much less the million across the fetid plain. Cops are the business end of bad politics (is there any other?) whether it is speeding, illegal vegetation, raisin farming or real crimes. Since the end of WWII, the police have become a more ubiquitous presence and the official start of Prohibition II in 1972 accelerated the process until 9/11 gave the government the excuse to de jure and de facto Federalize the one million plus coproaches that presently infest the corpus of America. If you doubt this Federalization, look at two things: spend a day at your local courthouse and ask the attorneys what impact and percentage Federal statutes play in local kidnapping and caging of the unfortunates trapped in the snare of the police state. Then examine the amount of money the Federal government grants lower police jurisdictions whether the Pentagram programs like 1022 and 1033.

Is a Terry frisk a state creation? Is the buzz-cutted military mouth-breather costume the cops wear a result of local fashion or wanting to look like the Hollywood fascisti the Left Coast passes off as entertainment that serves as a propagandist arm of maximum government?

American cops are the re-imagining of many state bands of thugs before it: the Gestapo, the Russian Cheka and NKVD, Mussolini’s OVRA ( a pale analog of Wilson’s notorious American Protective League). American cops don’t have to be secret police, they are living the Communist and Fascist wet dream of a judicial rubber-stamping of any crime against the state, massive gulag facilities and an executive regulatory apparatus that will criminalize ANY human transaction if not conducted with state approval or license.

American policing has reached a state of incivility, mayhem and naked murder that should make any decent man blanch but the Milgram/Stanford experiment shackled to the Stockholm Syndrome that is the tax cattle milling about under the red, white and blue simply obey.

Because the price of disobedience to the armed state sentinels prowling the American landscape will tolerate no less.

Watch any police encounter on the tens of thousands of video archives by observers and bystanders; every encounter is escalated so that the state thugs can apply the wood shampoo or worse.

Cops serve and protect the masters and no one else. They collect revenue for the mismatch between your speedometer and the signs on the road and during the stop, they will shoot you for non-compliance. I used to provide evidence of this but anyone with a computer or a TV or a newspaper can find ample evidence.

Cops are zookeepers; armed Leninists who seek violent revolution. The police seek to make every citizen cower and quaver before the power of the almighty and omnipotent state. The worthies in DC and the government satraps in the subservient states who are able to subjugate hundreds of millions before them with simply a dash of a pen or whisper into a phone.

The revolution in this case is the certitude of the grave for non-compliance with every edict and laws passed from on high. From seat belts to raw milk and all the other rule of law nonsense permeating the malum prohibitum pantheon in government that seems to be the sole reason for the existence of the state now.

The police are not your friend, they are the armed angels of death who keep the tax cattle in check and cull the individuals in the herd who refuse fealty to the overlords and withdraw their consent.

Police are the true vanguard of armed revolution in American and the revolution is the creation of a vast prison complex where once a more free country stood.

20 thoughts on “The Other American Revolution: Cops as Armed Leninists by Bill Buppert”