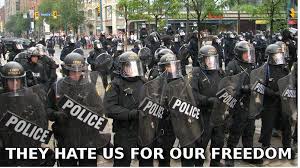 “In keeping silent about evil, in burying it so deep within us that no sign of it appears on the surface, we are implanting it, and it will rise up a thousand fold in the future. When we neither punish nor reproach evildoers, we are not simply protecting their trivial old age, we are thereby ripping the foundations of justice from beneath new generations.”
– Aleksandr Solzhenitsyn, The Gulag Archipelago 1918-1956

Publisher’s Note: The Canadian War Memorial and Parliament were attacked by gunmen this morning and ample evidence of the evolution of the police state in the north was on display as cops in full military regalia stomped about. No matter the cause, the usual suspects in the warden’s office known as government will further erode if not exterminate the gun rights of the Helots in Canada. Standby for news.

A number of readers have written to quibble on the notion of Civil War and I do think the USSA has been waging a “soft” CW since 1791 with the ratification of the primary plantation Covenants, Conditions & Restrictions (CC&Rs) in the Constitution. My observations here are a scratch speculation on the “hard” CW to come authored not by conspiracy but government malevolence and incompetence.

If you would like to continue this conversation in more depth, join our ZG forum. -BB

Eric Frein may be the latest installment of a tradition in the American story of outlaws like Eric Rudolph, Troy James Knapp, Jason McVean, and Robert William Fisher, who were able to elude government and its police for years in rural and urban environments. No one is calling them heroes for their misdeeds or misadventures simply Exhibit A of why the over-funded police in America tend to be a lethal clown posse in rural America. “Popcorn” Sutton provides a memorable vignette on how to make the rural trade prosper. I will leave to others to assess what the mindset of Frein may be and the various theories about why he did what he did. I suspect that Frein may be part of a growing subculture in America that despises and loathes the state of American policing today. This small subculture is not comprised of criminals per se but folks who are simply tired of living in the emerging Stasi state that is the USA.

The PSP has issued a shoot on sight now on a suspect for whom the whole story has yet to be revealed; much like the Dorner episode, innocent until proven guilt is quaint but no longer applicable. Think about that: the authorities admit the suspect will not be taken alive. The future effect of this will incentivize the “nothing to lose” proposition that American copdom is unprepared to face. Solzhenitsyn provides more instruction here that the American police state will ignore at its peril.“You only have power over people so long as you don’t take everything away from them. But when you’ve robbed a man of everything, he’s no longer in your power – he’s free again.”

Is Frein a cold-blooded killer or murderous thug? Who knows and the way the system works, we may never find out. Very few people die by the rifle in America which makes this stand out but I suspect that statistic will increase in frequency instead of decrease in the future. The rifle tends to be a tool of insurrection and not mere crime.

The American police state has always been a savage enterprise enforcing unpopular or simply bad laws for decades. Try Woodrow Wilson’s infamous American Protective League on for size for a dollop of where this madness descends from. Whether the nasty business of alcohol prohibition in the early twentieth century or the other drug prohibition campaigns that succeeded it to grow the size of government, uniformed cops in all 19,000 department today from the local to the Federal level have created a formidable gulag state nicely accelerated by the strike on New York and DC in 2001.

While I think the numbers of civilians, especially innocents, murdered by the police in America is far greater than the official numbers, there is no government database (surprise!) that collates all the incidents. Those numbers are at least four times the purported 500 per annum killed since 9/11. I suspect one reason this is not done is the sheer number of corpses piled up yearly by the cops would cause a revolution that would find many lamp posts straining under the weight of hanged policeman in local burgs much like the collaborators in Vichy France after the country was liberated from the Nazi police state.

Like Frein, Dorner in California demonstrated for all to see that one determined man gunning for the cops can paralyze an entire state’s law enforcement apparatus and have them running for cover. Two incidents after the during the Dorner caper come to mind to show just how ill-advised and frightened the constabulary were of tackling an armed suspect who knew what he was about. In the case of the Dorner fiasco, the frightened police opened fire on a man driving to surf and two women delivering newspapers.

Much like the strike by al Qaeda on 9/11 in 2001, these events intentionally or accidentally set into train a cavalcade of unintended consequences and self-immolation on the part of the state. The US has formally driven itself into bankruptcy since 9/11 and the police state has helped to apply the gas to the process.

Imagine a dozen or a hundred Dorners in one state hunting the police population. Picture the confusion and fear sown among the ranks that are accustomed to mauling and thug-scrumming unarmed individuals and quite literally getting away with criminal violence and murder on a daily basis.

With few exceptions, even the vaunted thousands of SWAT teams, American police do not encounter talented armed resistance to their predations. For every Dorner incident, there are thousands of Americans savaged and mauled by the cops who offer no resistance whatsoever. Some of these unfortunates go to the hospital for non-crimes like obstructing and resisting arrest.

Tens of thousands of veterans have returned who have seen the elephant and been under either direct or indirect fire. Some of these veterans have gone to the dark side and signed up to be cops but many others have simply found other work that does not provide a clear and present danger to their friends, family and neighbors.

Here is a snapshot of the future: the present vector of violence by the police state will increase and they will start pushing the wrong folks the wrong way or more significantly the tens of thousands of woman and children ravaged by frightened cops will have male relatives who discover a pair and decide to remedy the dishonor visited on their family by the cold institution of restitution of blood. Frein is simply a symptom of a broader future trend.

The Non-Aggression Principle presents a formidable obstacle to many who would justify such protection against police but even those inhibitions are being shattered every day as more and more Americans don’t feel consoled by the presence of police but frightened and concerned for their well-being and physical safety. In the end, the police are the existential threat to human liberty; no political bad actor could deny a single human being liberty or freedom if the enforcer class didn’t exist. None.

As the legal system becomes more and more voracious in the number of people it cages in the largest per capita prison population on planet earth in the next few years, more and more of these potential guests will elect for an alternate means of reaching Valhalla instead of a long stretch in incarceration.

Some of those wronged men will be combat veterans or guys who know their way around a weapon. This will be the dawn of a new age in American policing because the days of cheap thuggery where they literally have a license to kill and a docile population to push around will vanish. The victims of the police state will discover what Dorner did; once you kill the first cop, the rest are free because you won’t see the inside of a patrol car much less a court room.

Erik Frein knows this whether he is a white supremacist, a child pornographer or choirboy, or whatever the state-fellating media complex splatters him with; he will not be taken alive in the new America. The police in this country are so emboldened by the evil trifecta of officer safety, qualified immunity and police unions nothing will prevent them from doing their worse.

Remember the teenager gunned down by the Sheriff’s Deputy, Erick Gelhaus, in California who had bragged on the internet about getting your war-face on. He, of course, faces no charges for the cold-blooded murder of a child. That is the level of maturity and professionalism in the ranks today. The Feds are even worse and they have a sordid track record of maiming, murdering and incinerating men, woman and children in the pursuit of their brand of justice.

The common thread through all these incidents is that while the cops dress up in military regalia, they are not trained to combat standards nor accustomed to what it takes to operate in teams against a trained and armed combatant enemy. With 80% of them overweight, there is no great fear of them getting close to combat standards. As an aside, some of these worthies claim the obesity is due to the stress of the job. If that is the case, why aren’t all combat soldiers overweight? Obviously, because they have discipline and can control input to the bottom of their face.

If they do wish to train up like that, liberty is dead and gone in America even worse than when you woke up this morning. If they wish to avoid the need for these, cops needs to stop their viscous and aggressive behavior against everyone they encounter.

But this won’t happen.

American police declared war on common Americans long ago and the war has progressed nicely for them as they literally get away with murder every day. Future historians may find the causes of the inevitable civil war brewing in America to have partial roots in the police state. Time will tell.

In the words of the sage, Aleksandr Solzhenitsyn:

But the times, they are a’changin’.

Frein is an early warning indicator of storm clouds on the horizon.

“There is something about the state putting the power to bully into the hands of subnormal, sadistic apes that makes my blood boil.”
– Gore Vidal, Death in the Fifth Position