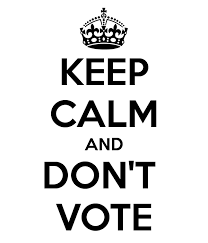 I know, I know, this close to the election, I seem to be chattering on and on about it but voting is one of the cruxes of why slave people think they’re free thanks to the ballot box.

My father passed away last year and he was a die-hard believer in voting and duly registered in the state we live in when he moved in with us. I recently drafted a letter to the county registrar asking to deregister him from the rolls and did the same for myself. Years ago, I had a tilting at windmills moment and decided to run for state senate so I registered in order to do so. The process was so repugnant and I had conversations with so many of the election illiterati in the local venues that I withdrew and thought better of it.

I would speak before my friend, Brian Miller, before he mounted the lectern so he would appears moderate in light of my unorthodox and radical views. He was running for Congress and one of the only candidates in 2010 to do so with Ron Paul’s imprimatur. I knew the end was near when I saw a loathsome Neanderthal toting a sign with George W. Bush’s visage with the legend “Do you miss me yet?”. I simply thought the entire polity was barking mad who would even participate in the electoral nonsense.

I was a big fan of Ernie Hancock’s campaign for Secretary of State in Arizona in 2006 where he urged people not to vote.

A quick review of why voting is tyrannical:

If voting could change things it would be illegal.

Candidates are behaving in the extraordinarily narrow constraints of both legal and government approved standards.

Increased suffrage across sex lines and socioeconomic strata correlates to an increasing size in government.

Voting is an illusion of granting legitimacy.

Have you ever wondered why obviously tyrannical regimes like China, the USSR and Cuba hold elections even though the results are a foregone conclusion? There are only two likely answers: legitimacy and a “voice” in law enforcement. The former is obvious to the casual observer but the latter not so much.

How many times have you heard the usual suspects crow on about the importance of a voice and that you may not like the behavior of the regime but you have a choice in which creature you select to “represent” you and they carry the philosophical water?

Strip any government of its policing and law enforcement function and no one will comply with the edicts issued by the elected mandarins and in the US, the venal and corrupt executive that lords over the land like an occupying force. Whether it is the land of the free or a Russian gulag or a Chinese labor camp, cops make governments work; they are the sociopathic pointy business end of all collectivist endeavors.

I was listening to National Pinko Radio in the car this morning and the newly minted FBI Director, James Comey, was whining and complaining about the lack of transparency in new communications devices impairing his ability to spy on the polity. This latest installment of an American Lavrenty Beria and his high-tech NKVD takes the reflagging of the mission of the FBI as a national security organ very seriously. There is no liberty or freedom that will be left unexamined by this totalitarian aspirant.

It then struck me, if no one voted, what excuse would the usual collectivist apologists proffer for the excesses of government? In other words, how many times have you heard a friend or neighbor say either there ought to be a law or if you want to change it then vote a candidate in. Their a priori assumption is that a candidate must be selected to manage every aspect of their life.

This is why even totalitarian societies like the ones I described earlier do the kabuki dance of voting. It’s a sophisticated rationalization and cover for government abuse and mayhem through the simple shamanistic notion of blaming the victim because they approved the power in the first place. I’ve often described the US as a crazy patchwork quilt of the Milgram/Stanford experiment harnesses to a vast herd of Stockholm Syndrome patients. No matter how ineffective and murderous the regime, the elected psychopaths and their nomenklatura simply point at the masses of duped participants and claim the holy writ of protection by majoritarian tyranny. Sort of like the serial killer standing over the bloody corpse of his latest prey, pointing at him and caterwauling the victim made him do it.

This is the same sordid excuse you hear from the government gang of thugs known as police and law enforcement. They consistently present the reverse defense of Nuremburg to absolve them of all the crimes and mayhem they have committed as the armed agents of the state.

So to simply add to the list of why voting in a government-sponsored contest is immoral, reprehensible and just plain stupid, you remain a slave who happily and blithely slips a suggestion in the box for your next plantation owner. By doing so, all the mandarins and rulers will look serenely on as they see the next dupe upon whom they place all the blame for their psychopathic behavior.

Remember that all collectivist act like toddlers with guns and a license to kill. Don’t be surprised if your vote has lethal consequences.

20 thoughts on “Voting for Vandals: The Tyrant and the Ballot by Bill Buppert”