Publisher’s Note: Due to some WP eccentricities, I have turned the comments function off until we fix it. If you wish to comment, I would urge you to join the conversation at my forum here. You can find my email in the Contacting Me tab. -BB

The days of Mayberry RFD are long over and done with. The police serve and protect the rulers and no one else.

Frequent visitors to my site know that cops are a favorite topic here. No political bad actor can possibly deny the freedom of one human being absent the police enforcement mechanism to do so. Police have been and remain the primary existential threat to human liberty; all on display in the latest clown posse shenanigans in Missouri. The huge statist police occupation of America is Exhibit A of how important that maxim seems to be to the powers that be. The latest mischief by the law enforcers in Ferguson, MO point to some systematic and oft-repeated concerns about police brutality, quickness to violence and secure blanket immunity to ensure that bad cops (is there any other?) evade punishment for crimes that would put the taxpaying proles in the hoosegow.

Like a raft of turkeys or a murder of crows, the city of Ferguson, MO is suffering an intrusion of coproaches and the qualifier appears to be quite accurate.

There is a silver lining to this event. Much like the Boston bombing episode where the cops overreacted and crushed rights and created police victims out of whole cloth, the Missouri episode demonstrates a very important observation. Even though the cops are kitted for war with all their fancy equipment, they have no clue how to use it. Now this is married to the fact that the cops will become increasingly savage over time but a tipping point may be reached where reaction may not be as pleasant as the “black and blue line” anticipated.

For the old infantry hands in the readership like myself, Infantry Rifle Platoon and Squad in FM 7-8 or the coffee table book variety in FM 3-21.8 in addition to the Ranger Handbook (SH 21-76) have plenty of information and guidance to fight the coming Endarkenment the Feds have planned for America. Even the SWAT clown posses across the land rarely if ever come up against seasoned lone wolves or fire teams that are trained in the warfare they pretend at like overgrown adolescent boys playing at soldier unfit to actually fight in the Legions.

Modern policing depends on a posture of domination that demands immediate submission and in most cases, the coproaches thugscrum an unfortunate human who hesitates a second or two in compliance. One can on one hand count the incidents in the last decade in which the police have battled a hardened and savvy dismounted light infantry foe toe to toe. They will not fare well.

Fitness is a key component of success in a fight and the natural slothfulness of government employees and police unions have worked to underwrite obesity and lack of fighting trim in the ranks. Fitness also speaks to discipline and the ability to face adversity, fat cops speak to neither but also dim their chances of ramping up the militaristic occupation of American streets they presently envision.

Take a look at the clown on top of the armored vehicle that has been such an iconic photo from the police antics in Ferguson, MO. Brian Merchant does a terrific analysis here.

A few observations. He is sporting a large scope that may be ideal for 300 meters and beyond but certainly not the anticipated 100 meter minus shooting customarily used by police overwatch for hostage or barricaded suspects. The weapon is an expensive .308 caliber AR platform replete with tac-latch for the charging handle and all the goodies one would find bedecked on the hardware of a gun hobbyist or competitive shooter. Indeed, he is wearing Marine Pattern camo (MARPAT). You will also note there are no backup iron sights (BUIS) mounted on the weapon. See a better picture here. This additional picture helped to clarify my confusion at the placement of the RMR for a right-handed shooter. The biggest question is why dress like a soldier in the first place if you don’t plan on going to war?

Also, black is a tricky camouflage to use in environments that lack any natural shadows. In the heat of a summer day, a black helmet is problematic. There is a reason military forces rarely wear black in vanilla combat operations. The human eye detects movement. The US Army banned the carry of black umbrellas because the sudden opening of the device would startle horses. I suspect the department just likes the sexiness of the color since it is the universal color of death in modern times.

One could conservatively estimate that if that is quality glass on the rifle, it is about five thousand dollars sitting in front of the poorly placed cop on the “command” vehicle. Where does all this money come from to finance this occupation army? 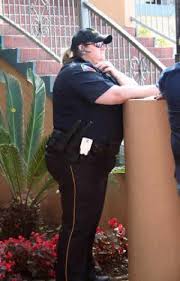 You do remember you live in a country that is by all measurements bankrupt? Yet the ruler’s Praetorians are decked out in all the tactical chic they can manage and arrive in style in a variety of vehicles of war.

By the way, one of the reasons you see so many cops clinging (desperately, I might add) to the outside of armored vehicles is the tremendous obesity problem that plagues American policing. I do find it ironic to see this kind of means used to travel in or on mine resistant vehicles (please go to 7:10). Some observers have chalked up the fat American cop to stress, yet if this were the case why aren’t combat soldiers the size of small blimps? Please note that many of the pants offered at LA Police Gear have production sizes up to 60” in the waist, that is a five-foot human wrapped securely around your low IQ law enforcer’s garden of guts. Of course, the police unions will rush to make this a disability to increase the potential and lucrative monetary gravy train for the tax eaters known as cops. 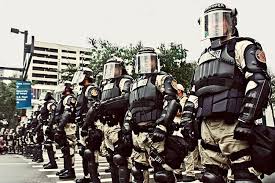 By the way, one of the primary reasons you will hear these departments justify the military kit is for those very situations just mentioned; yet they are as rare as hen’s teeth. Most of the reported 80,000 SWAT warrants served annually by the 19,000 (!) police departments in America do not involve critical response scenarios but simply a reason to dress like soldiers and cower in body armor while gunning down a seven year old girls. The news is filled with the legion of incidents in which the cops have maimed and killed innocents on practically a daily basis.

What the state doesn’t realize is that they can continue pressing the big brother envelope and push and push and they simply expect no blowback but government behavior overseas has shown otherwise and this domestic predation on the citizenry by the government will be no different.

Ferguson is a microcosm of things to come. The government is conducting an undeclared civil war against any Americans who resist the leviathan state.

Get your seat-belt on and not because the cops want you to.

Train your mind and body better than your opponent. He is corpulent, lazy and short-sighted.

America is in for a wild ride.

10 thoughts on “An Intrusion of Coproaches: Sheriff Andy is Shown the Door by Bill Buppert”