Publisher’s Note: Yesterday, 24 August was both my birthday and fortuitously, the day the British burned down the White House and other government edifices through the DC swamp area in 1814. The siege or burning of Washington was an attack during the war of 1812 by British forces and those of the United States of America. The American troops had been defeated by at the Battle of Bladensburg by troops led by Major General Robert Ross. His forces later went on to occupy then Washington City and destroy a number of buildings, including the White House.

To quote the Architect of the Capitol (yes, you or your unborn children pay for that, too) recently:

“The British focused their destructive work on the principal rooms, foregoing the lobbies, halls and staircases, thus securing their escape route. In the south wing, soldiers ignited a giant bonfire of furniture slathered with gunpowder paste in the Hall of the House of Representatives. The heat from the fire grew so intense that it melted the glass skylights and destroyed much of the carved stone in the room, including Guiseppe Franzoni’s life-size marble statue of Liberty seated on a pedestal, located above the Speaker’s rostrum. Downstairs, the Clerk’s office was transformed into an inferno of burning documents and furniture; this fire produced a heat so great it forced the British to retreat from the south wing, leaving half of the rooms on the first floor unscathed.

In the Supreme Court Chamber, on the first floor of the north wing, troops piled furniture from nearby rooms to create another great bonfire, severely damaging the Doric stone columns. Upstairs, a large room that then housed the Library of Congress’ collection of over 3,000 books served as a ready stockpile of fuel. The space burned so fiercely that it endangered a portion of the exterior stonewall. From the library, winds spread the flames to the Senate Chamber, where the damage to the art and architecture was also severe. Upon seeing the flames of the Capitol from his temporary residence at the Octagon House, French minister Louis Sérurier remarked, “I have never beheld a spectacle more terrible and at the same time more magnificent.”

In the spirit of both celebration and reflection on what could have been, I offer you one of my flights of fantasy where I speculated on what Idaho’s secession from the Federal leviathan may look like.

Notes in the Margin: I have done a number of new podcasts and interviews that can be found at the Media and Interviews tab on the blog. Shane at Static Media Hub has opened a sub forum at my forum, which can be found here. Still slogging through my writing for my novel. Truth be told, fiction is far more laborious to me than non-fiction. 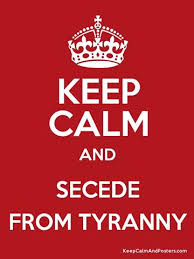