The nation state marshals resources for war better than non-state entities through economies of scale and the ability to command and direct central planning efforts although it suffers a concomitant lack of agility and innovation due to the necessity of creating large bureaucracies to execute the formation of large armies and still Clausewitz’ Trinitarian notions are certainly relevant today.  Subject to misinterpretation by non-German speakers, his complex theory is just so because the notions are…complex.  Bassford and Villacres make the best summation I have found:

Clausewitz defines the components of the trinity as (1) primordial violence, hatred, and enmity; (2) the play of chance and probability; and (3) war’s element of subordination to rational policy. [1]

As with so much multilingual literature in history, proper translation is key. The Trinitarian notion is much greater than the sum of its parts. The last clause is the operative measure of effectiveness in harnessing what van Creveld would call “fighting power.”

Like so much that we discover when divining the auguries in strategy and grand strategy, Clausewitz provided a solid basis from which interpretations could be rendered. The rationality of policy must be embraced through the parochial lens of the respective sides in a conflict. Risk and the assumption thereof is a major component of daring and combat calculus that when it fails may look irrational but had a rational intent to begin with.

I think that Schuurman and Echevarria are wrong in their assessment of Lind and van Creveld. The latter confreres posit generations of warfare and Echevarria especially fails to see that they are not distinct succeeding stages or a new mode of warfare but simply additional permutations outside of conventional warfare. Both Lind and Van Creveld will certainly acknowledge that irregular and non-state warfare practices are as old as mankind. The Vietnamese campaign against both the French and Americans clearly used both conventional and irregular means to fight a simultaneous war against invaders.

There is no doubt that a Trinitarian analysis can be useful in prosecuting the irregular wars and conflicts that pepper the planet but van Creveld and Lind are simply saying that additional factors are at play and bigger is not necessarily better. Echevarria is not all wrong, he makes a great point:

“It also means that one-sided, McNamaraesque formulae and facile, prescriptive theories like effects-based operations will always be around because the arrogance that underpins such thinking seeks to control the variable nature of war. Finally, it means that it is possible for war to have a changeable nature, and yet still be war.” [2]

But to lump Lind and van Creveld with the infamous McNamara is an unfair conflation at best.  They happen to be some of McNamara’s most severe critics. It would be fascinating to see how this disagreement would mature if both sides acknowledged that there are no lock-step successions of the generations of warfare they propose but a blending of the military mechanisms used when conditions and evolutions of conflict behave over time.

When van Creveld makes the point that “states were also in a position to take away as much as 85% of their citizens wealth for the purpose of making war” [3] he is certainly making the case that the Trinitarian concept is alive and well by rationally harnessing the material means to expand the warfare state or prepare for the prosecution of a conflict. Van Creveld makes the cogent point that Clausewitz may not have the full descriptive power that his acolytes claim. This is increasingly relevant as more and more non-state actors, both good and bad, take the world stage. In the end, I have no doubt Clausewitz is relevant to modern conflict but the emerging literature that approaches irregular warfare in a fashion that is more cognizant of the interdisciplinary factors that shape modern conflict such as Field Marshal Gerard Templer’s admonitions about the importance of political calculation in the prosecution of small wars and the lack of efficacy of high technology forces being stymied by relatively impoverished adversaries simply expands the framework. Van Creveld makes the observation that Clausewitz’ relevance as an explanatory device for both medieval conflict and the world after 1945 leaves some gaping questions for explanation that are not satisfied by the Prussian scholar.

“While Clausewitz must surely not be totally disregarded in the last decade of the twentieth century, we must carefully examine the assumptions which underlie his model. These assumptions are the basis for the organization of our armed forces and the strategy with which we use military force. Quite simply, the record shows our forces fight best when they fight other armies. It should be clear that trinitarian assumptions are not universally valid, as demonstrated by our forces as they engage non-trinitarian opponents in counter-drug, counter-insurgency and counter- terror operations.” [4]

The nation state is in for a rude awakening on the war front in the twenty-fist century. The non-state actors will ultimately prevail in the MIddle East and mountainous regions planet-wide that have always been “state-repellant.” Clausewitz doesn’t have all the answers but the explanatory framework is a good starting place to develop an understanding of the new frontiers ahead.

[3] van Creveld, Martin. “THROUGH A GLASS, DARKLY Some Reflections on the Future of War.” dnipogo. https://dnipogo.org/creveld/throughaglassdarkly.html (accessed September 11, 2012). 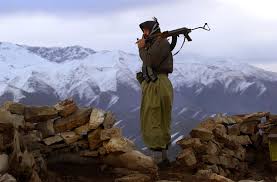 2 thoughts on “The Trinitarian Dilemma by Bill Buppert”