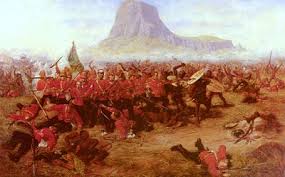 By statist standards, the Weinberger Doctrine is a sound, deeply reasoned and frankly pragmatic doctrine that gets plenty of lip service but no real world observance in the 21st century in American foreign policy and export of violence. One would be hard pressed to come up with a guiding template that more keenly fuses Clausewitzian realism with Tzu’s admonitions for the “indirect approach.”

(1) First, the United States should not commit forces to combat overseas unless the particular engagement or occasion is deemed vital to our national interest or that of our allies. That emphatically does not mean that we should declare beforehand, as we did with Korea in 1950, that a particular area is outside our strategic perimeter. [1]

One can observe that this was certainly the case with Afghanistan in 2001 even though the deployment of conventional forces prematurely after the burgeoning success of the Northern Alliance to best the Taliban with US/Allied special operations assistance spoiled the recipe in place for a long-term self-determination.

The US had no such national interest in hand despite the 21 causus belli enunciated by President Bush during the run-up and actual invasion of Iraq.  Tremendous intelligence tension was evident and Defense Secretary Rumsfeld was so affronted by this that he stove-piped and forced conclusions with his Office of Special Plans to convince the skeptics that a removal of Saddam Hussein was necessary. The concomitant disastrous missteps of the dismantling of the Iraqi military and the evident ignorance of the resistance brewing to American long-term intervention went unheeded and history tells the rest of the story.

(2) Second, if we decide it is necessary to put combat troops into a given situation, we should do so wholeheartedly, and with the clear intention of winning. If we are unwilling to commit the forces or resources necessary to achieve our objectives, we should not commit them at all. Of course, if the particular situation requires only limited force to win our objectives, then we should not hesitate to commit forces sized accordingly. When Hitler broke treaties and remilitarized the Rhineland, small combat forces then could perhaps have prevented the holocaust of World War II. [2]

GEN Shinseki lost his job as America’s top Army General because he refused to submit to rosy predictions and ludicrous force projections necessary to sustain a long-term occupation of what was becoming the birth of several Islamic republics in the vacuum left behind by Hussein’s brutal yet essentially secular Arab state.  The US simply did not have the force structure or culture to occupy and transition the country to a state that would be neutral or beneficial to American national security interests in the region.  Optimistic talk of increased oil outflow to Western countries and the discovery of mysterious weapons of mass destruction (outside of US supplied chemical weapons) saw no fruition.

(3) Third, if we do decide to commit forces to combat overseas, we should have clearly defined political and military objectives. And we should know precisely how our forces can accomplish those clearly defined objectives. And we should have and send the forces needed to do just that. As Clausewitz wrote, “no one starts a war — or rather, no one in his senses ought to do so — without first being clear in his mind what he intends to achieve by that war, and how he intends to conduct it.” [3]

The objectives kept changing over time for the entire theater.  In Afghanistan, it was at first the removal of the Taliban then it became the creation of a Western state that would increase women’s rights and suffrage in an Islamic nation in cooperation with Pakistan which had actively supported and harbored the Taliban and Al Qaeda during the entire prosecution of the war. In Iraq, one could find no milestone of strategic or grand strategic value and in a counterinsurgency (COIN) conflict, this is a slow death for occupation forces who are asked to work in a haphazard and whimsical fashion as the policy vacuum slowly grows larger and more mercurial over time.

(4) Fourth, the relationship between our objectives and the forces we have committed — their size, composition and disposition — must be continually reassessed and adjusted if necessary. Conditions and objectives invariably change during the course of a conflict. When they do change, then so must our combat requirements. We must continuously keep as a beacon light before us the basic questions: “is this conflict in our national interest?” “Does our national interest require us to fight, to use force of arms?” If the answers are “yes”, then we must win. If the answers are “no,” then we should not be in combat. [4]

These adjustments would take place over time especially in light of surge efforts in both Iraq and Afghanistan but a decision was never made as to the very character and essence of the war to guide a strategy that would be influenced by strategic compression on a daily basis.  Was it a conventional fight or an irregular fight?  Was the presence of large forces a constant hindrance to achieving the grand strategic goal of eventual withdrawal by worsening to the extent and characteristics of the conflict?  If a true COIN scenario were in place, where were the limits on occupation? Did PMESII factors counterbalance the overweening DoD character of the conflicts?

(5) Fifth, before the U.S. commits combat forces abroad, there must be some reasonable assurance we will have the support of the American people and their elected representatives in Congress. This support cannot be achieved unless we are candid in making clear the threats we face; the support cannot be sustained without continuing and close consultation. We cannot fight a battle with the Congress at home while asking our troops to win a war overseas or, as in the case of Vietnam, in effect asking our troops not to win, but just to be there. [5]

The American populace has never weathered a long conflict well and these are long wars in Iraq and Afghanistan (not to mention the expansion into Pakistan, Yemen, Libya and Syria) and the halcyon days of the first six months after 9/11 have long evaporated and the population seems exhausted by the national security state at home and the bad news that seems to pepper the news every day.  There is no declaration of war and no sense of what the shape of victory even looks like.

(6) Finally, the commitment of U.S. forces to combat should be a last resort. [6]

Evidence demands a verdict and it is obvious that armed forces in Afghanistan and Iraq were the first resort and not the last.

Ideology is clouding the vision of many policy-makers and blinding them to the real-world second- and third-order effects of American policies on the future.

“Today, with the United States polarized in a manner similar to the post-Vietnam period; grand strategists must take great care to prevent ideology from clouding their analyses of international realities and options. Pragmatists would go so far as to discard ideology altogether, but ideology can serve a useful purpose, and did serve a useful purpose after Vietnam. Realist ideology provided sound warnings against unilateral disarmament, reliance on international goodwill, and the conditioning of foreign aid on human rights practices. With information on foreign intentions scarce then, as it is now, some general ideological principles provided valuable companions to the human intellect, albeit companions who needed to be accompanied by pragmatism and never followed blindly.” [7]

Moyer makes a compelling argument. There appears to be a critical mass within both the major political parties at the elites level that cannot be distinguished in the execution of policies the Middle East.

Even the lessons of Desert Storm appear to have been lost except for a reanimation of the brilliant American forging of alliance relationships but even that political capital was exhausted as dozens of Allies simply vanished or so diminished their contribution as to be invisible.  The American defeat of Iraq by force of arms in Desert Storm was a textbook occasion of strategic envelopment and brilliance that would have made both Tzu and Clausewitz proud but no longer.  The American application of conventional force strategy is exhausted and defies the notions of even the revamped campaign planning that became all the rage among the uniformed Jedi and cognoscenti at Fort Leavenworth in the heart of the Army intelligentsia.

The strategic deficit disorder that cripples the West and the US in particular is not going away in this thirteenth year of the conflict in Afghanistan as the US cagily dances around acknowledgement of the strategic stalemate if not defeat of the Western forces in Afghanistan to achieve any military victory much less other gains for the fatigued residents of the imaginary country.

The ISIS forces in Iraq spell a surprising turn for the forces indigenous to the Levant. The fragility of US mandates and inefficacy of staying power in Western military arms makes for an interesting future if the slapdash and economical illiterate interventionism continues.

“Operations in Iraq and Afghanistan and the war on terrorism have reduced the pace of military transformation and have revealed our lack of preparation for defensive and stability operations. This Administration has overextended our military.”
– Barack Obama

1 thought on “Death of a Doctrine: Modern Military Malpractice by Bill Buppert”