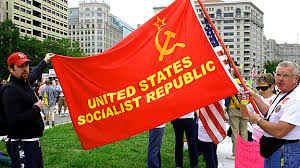 June 12 is the national holiday known as Russia Day where the Eurasian tax cattle in that particular jurisdiction celebrate nationalism and big government much like the celebration of Dependence Day in America on July 4. It was adopted in 1992 by the new Russian Federation also known formally as the Russian Soviet Federative Socialist Republic under the then Chairman of the Supreme Soviet, Boris Yeltsin. But like all these holidays is simply an excuse to give yet another work day off to government employees and make citizens happy about their chains and manacles.

I thought it appropriate to call your attention to a speech I did in 2010 at the Freedom Summit hosted by Ernie Hancock. I talked about the coming deSovietization of the USSA and how that may play out. I look back on the speech and am rather nonplussed at how much worse it is right now and how the cleansing and purging may take longer than I surmised. Much like the Russian experience, when one trades one government for another, they take on eerie similarities that simply do not get better with time.

The speech almost did not happen because I lost my voice the night before, a happenstance many would applaud.

Orwell and Huxley were merely astute observers who saw how all states evolve over time and until economic collapse, war or death by bureaucratic sclerosis, the USSA and its analogs world-wide will continue to chug along.