Publisher’s Note: It appears my notoriety as an anti-government zealot has come to the attention of the rulers and they use both me and my site as an exemplar of non-violent anti-government writing and speaking. I may be the subject of a number of classes for the government’s cop-roach enforcers at all levels. If this turns out to be the case, I wear the badge proudly and hope against hope that some of the mandarins who read my screeds discover a burr in their intellectual saddle or the tiniest seedling of doubt planted in their minds on the wrong-headedness of maintaining and expanding totalitarianism on the North American continent much less the collectivist impulse that makes America an armed and dangerous agent of the state disease planet-wide.

Zero government is not a wild-eyed notion of fantasy. A world without rulers but abundant with rules in a voluntary society riffs off human nature in a far more effective and moral way than any self-professed statist government. The true fantasists are the long train of psycho- and sociopathic rulers and their collaborators who insist that initiated violence and the creation of prison states is the only proper way to organize society and serve humanity. Throughout the ages, from the Stoics to Wilberforce to the abolitionists and the modern abolitionist movement in small pockets of humanity, the notion has been both simple and elegant: how can a man be free if his choices of not harming others ultimately puts him in jail or worse? It is no harder than that.

The world is at a tipping point where the forces of statist darkness are gathering strength while the brotherhood without banners fights a constant rearguard action as it retreats into insignificance in the face of totalitarian ambition.

Your choice is clear: either you are a slaver or not. -BB 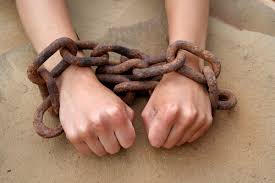 “But whether the Constitution really be one thing, or another, this much is certain – that it has either authorized such a government as we have had, or has been powerless to prevent it. In either case, it is unfit to exist.”

Slavery was codified in the founding documents of America in deeply flawed and tyrannical instrument called the Constitution. The abolitionist spirit in America as exemplified by Garrison and Douglass were a tremendous boon to awakening Americans to the cause but it never took despite the alleged reasons for the War of Northern Aggression being fought to free the slaves which became a cynical Lincolnian calculus to boost flagging efforts to get the North behind the eradication of the South.

The Constitution simply guaranteed the “peculiar institution” in the US and the addition of the Fugitive Slave Act in 1850 weaponized the Federal government’s ability to maintain the institution of chattel slavery. The post-war amendments abandoning slavery were nice window-dressing but simply drove the overt impulse to chattel ownership underground into a more under-handed and devious form of slavery to make the proceeds from servitude more palatable to the masses and the twentieth century would provide the progressives and collectivists with the tools they would need to make slavery more profitable for the rulers than they ever imagined.

There are a number of markers of true freedom but the most telling is the ability to opt-out of the chained condition once harnessed. So what is slavery by definition?

The Oxford English Dictionary (American) put it thus: A person who is the legal property of another and is forced to obey them. If you doubt in modern America, you are not a slave, be advised you are delusional.

The US government owns you in so many ways, you haven’t a shred of self-determination short of suicide. Many in the commentariat to include myself have detailed ad nauseum the tremendous tax burden in the US for producers, the leasing of employees by the Federal government to employers at a terrific burden to the efficacy and virtue of any above-ground American business and the raft of regulations and rules that make every American a felon in their day to day life. If you run a business and have not been paralyzed from the neck up in a skiing accident and become a collectivist, the truth is crystal clear. If you are simply a salaryman, one look at your tax liabilities once “paid” should further clarify your status as a slave.

After years of government schooling, I am still investing thousands of hours to deprogram myself from the nonsense and dig myself out of the epistemological hole that the entire wretched system is designed to bury us. Civics is nothing more than a clever moniker for government obedience training. A system that celebrates slavery as freedom and peace as war in a war that would embarrass both Huxley and Orwell.

America is not the celebrated home of the brave and land of the free because it lost all its apparent freedom in 1791 on adoption of the Constitution. The Lincolnian War against the South was a mere mopping-up operation to put every human in America on the plantation permanently. The “Civil War” was a mere adjustment of the shackles on the body politic. If you doubt that, then stop paying your taxes and start disobeying the legions of cops surrounding you on a daily basis when they insist you comply with an idiot rule or law these lackeys are in charge of enforcing.

One can list all the Amendments they wish after the unfortunate conclusions of the Second American Revolution and you still remain distinctly un-free in a nation that plays at shadow-boxing with political meat-puppets who claim to hail from different political viewpoints but are united in the fervor to ensure the survival and expansion of the Sovietized central planning organs emanating from Mordor on the Potomac. The kabuki dance between the major permitted parties in the very lucrative “advance auction in stolen goods” known as voting is comical at best and incredibly cynical at worst.

Despite Gandhi’s sufferings in 1906 in South Africa and the institution of apartheid and all the nastiness and bitterness generated by internal passports, America de facto and de jure enforces an internal passport system with the ubiquitous requirement of “government identification”.

Hell, if you wish to unfetter yourself from the USSA, you will be charged a 550 dollar fee for the privilege of getting the IRS out of your knickers forever. The only way to surrender the slave chains of US citizenship is to land in another country’s citizenship program because the US will not allow its tax cattle to become stateless.

America may be one of the most well armed slave plantations in human history and one can see that the relationship between private ownership of firearms and the docile behavior of tax cattle being ranched does not give the tyrants pause. One can look at the silly Second Amendment held up as a virtual tablet from God being peppered with holes in the twentieth century by the gigantic federal arms regulation enterprise enshrined in the jurisprudence of the 1934 National Firearms Act, 1939 US v. Miller, the 1967 Reagan legislation to disarm the black man in CA that bolstered the passage of the 1968 Gun Control Act and all the other hoplophobic nonsense that has been enforced by the goons at the Federal level and their willing collaborators in the provincial establishments in the states.

Not only do we live in a slave state but necessarily a police state to ensure the minions don’t get too uppity and start to question the mandarins in charge. I have written endlessly of the absurdity of the well-armed population blithely obeying and even engaging in hero worship of the worst society can bear in the modern police forces. If there were any good cops, why are they not policing the militaristic and violent behavior of their more Neanderthal brethren? Because good cops don’t exist anymore. The slave state and the police state must go hand in hand, one cannot exist without the other much like the totalitarian Spartans and their captive Helots that permitted them to gallivant through the Hellenic states and kill at will. America has done much the same in the post-WWII program to make the world safe for collectivism and communism with the latter providing gentle ideological cover for the former in different clothes.

Slavery was never abolished but merely reformed to make it a more palatable condition for the millions of humans trapped in the North American continent after the war. Chattel slavery may have started to disappear but an institution just as sinister and malevolent took its place as the US started to embark on expanding the plantation world-wide after the Hawaiian annexation of 1893. The money laundering required to keep the burgeoning military-industrial complex afloat would require an intensive retooling of the tax and regulatory function to sate the vampiric host of ever-growing government. Slavery would wear a newer and “happier” face.

I say again, absent initiated violence and the use of force and the complete abandonment of the Ten Commandments, no state on Earth could exist. This is equally true in the US and since the demise of the USSR, the US has been first among equals in its insistence on violence as the mortar by which it keeps the bricks of civil society together.

If any readers doubt this, practice civil disobedience, refuse to obey the police state and you will discover that you will be fined, kidnapped, caged, maimed or killed depending on your level of resistance for so minor an infraction as not wearing a seatbelt.

And then the disaster of democracy sealed the deal but that is another conversation.

Move on, slave, nothing to see here.