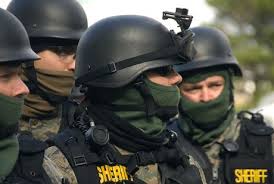 Yet another indication that the Regime and its subsidiary political apparatchiks in the various localities across the US are becoming nothing more than legions of auxiliaries to the Federal law enforcement leviathan. The Torrance, CA cop (I will bet dollars to donuts he is an overweight human), Brian McGee, has been cleared after ramming a vehicle not fitting the description of Dorner’s vehicle nor sporting the same pigmentation as the alleged cop killer. The smaller and whiter Mr. Perdue was on his way to a surfing break when the state thug rammed his car and fired three rounds through the windshield.

A number of observations become apparent.

This is quite simply a declaration of war on ordinary Americans by every police department in America, all 19,000 departments.

One stands a greater chance of being struck by lightning or devoured by a Great White Shark than being involved in a “foreign terror” incident on American soil. The Russian government repeatedly warned the boobs at Fatherland Security of the brothers allegedly responsible for the Boston bombing. I say “foreign terror” because the usual government misconstruing of language is apparent in their desire to brand abortion protesters, ecological cadres and right-wing nut jobs to include the heroes of Duck Dynasty as domestic terrorists when the primary threat to every American is the cop at the local to federal level.

No political bad actor could deny a single man his freedom or liberty without the police to enforce his psychopathic designs on humanity.

When one couple this with the “laundering” activities the Feds are encouraging when sharing the wholesale spying windfalls of taking taxpayer money and your unborn grandchildrens’ wealth to pry into every electronic transaction on Earth by Americans, you start to get the picture that the tyranny has only just begun or what Binney refers to as turnkey totalitarianism.

Binney: “All of the information  gained by the NSA through spying is then shared with federal, state and local agencies, and they are using that information to prosecute petty crimes such as drugs and taxes. The agencies are instructed to intentionally “launder” the information gained through spying, i.e. to pretend that they got the information in a more legitimate way … and to hide that from defense attorneys and judges.”

The government must practice barbarism and a form of perennial warfare to conduct its daily business and expand its power all the time. One would be hard-pressed to have a state if you did not violate all Ten Commandments and the categorical imperative.

Like Oscar Grant III’s execution in New York by cops and the outlandish jury decision in the case of two overweight government badged employees when the Fullerton homeless man was beaten to death, nothing happens to the murderers in uniform and they are becoming bolder by the day with their license to kill both humans and animals especially dogs with impunity. Unless the dog is a beast of burden in the drug war then an assault on that dog is a criminal offense but not if it is a privately cared for member of a family.

One open question is the accurate numbers of men, woman and children murdered by cops on an annual basis. Seattle provides a harbinger:

“Kalyuzhnyy was the sixth person killed by police in Seattle in 2013, an unusually high number in a year that saw a similar number of homicides (29) in the city as in the previous year (27) with four days left in the year.”

The Internet is populated by thousands of stories of police maiming and killing of civilians but it is most likely heavily under- or non-reported for obvious reasons. I have tried to discover a monolithic database of the numbers but have yet to find one and don’t expect the government to do so since it is not in its best interest to reveal such barbaric and wanton behavior that seems to be much more of a code of practice than accident.

While prosecutors at every level tend to be rather obvious in their loyalty to the state, the behavior of District Attorneys seem to indicate a rather shallow and one-sided obedience to rubber-stamping the most horrific offenses by the state’s attack dogs, both bipedal and quadruped. Between the unions, qualified immunity and the ability of cops to move to greener pastures on the public dole, the thin (in name only) black and blue line in America behaves as an occupying force and they can fine, kidnap, cage, maim and kill ANYONE in America and get away with it.

You need a fresh perspective: America is occupied by Washington DC and the increasingly Federalized policing forces are the Army of Occupation. We are all Palestinians living in Israel now, blacks in apartheid South Africa and residents of Vichy France in WWII. This is Reconstruction at the existential level. The mandarins in DC have certainly been waging a War on the World since 1893 but no country has ever used force and domination to assure its global position without doing the same at home.

You must stop believing in Officer Friendly and you do not yield at the peril of losing your life.

The very dangerous meme metastasizing through the ranks of the government praetorians is that a license to kill is a done deal and no matter how outrageous the violence visited on the taxpayer, you will simply get a free administrative vacation while the usual suspects rush to defend the indefensible behavior of government thugs.

The open question is when will it be too dangerous not to defend yourself before the cops do violence to you, family and friends. The recent spate of armed police killings of victims with airsoft weapons (to include children, again) shows that despite the lip-service given to weapons possession in America by private subjects, all cops consider it an affront to their aggrieved officer safety that the mundanes dare to even wear them much less possess them.

Cops remain the largest threat to human liberty in history and continue to carry on that proud thuggish tradition in America.