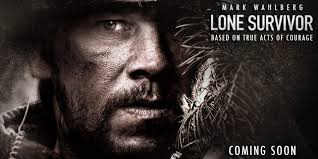 I just saw Lone Survivor with Mark Wahlberg loosely based on the book by Luttrell, the title character and least injured of the four-man crew haplessly and uselessly brutalized and sacrificed in the Afghan hinterlands in 2005 for yet another American neo-imperialist briar patch. As all autobiography is essentially fiction, realized as an heroic paean to the author, one has to suspend their disbelief with some of the morality plays on the screen like the argument about killing the two young sheepherders and the old man in the initial scenes that preface the rest of the movie once the SEALs are in Indian country. No one will ever know if Luttrell was the voice of humanity calling for the preservation of the indig’s lives even at the expense of operational security.

The movie itself is rather harrowing in the details of a military chase movie that is as gritty as the opening scenes of Saving Private Ryan and the intense small unit fiascoes in Blackhawk Down with the same kind of almost existential agony portrayed in the French production called Special Forces.  The parallels in story lines between the French film and this one is rather close; a small elite unit is placed in circumstances that exceed the skill sets of the most rehearsed and talented warriors.

SEALs do not have a solid reputation in the SOF community for light classic infantry skills and I was puzzled by the lack of Rally Points, alternative ORPs and the apparent complete absence of a comprehensive E&E plan. Long Range Reconnaissance Patrol (LRRP) and Strategic Reconnaissance (one of the five core SF disciplines) TTP and methodologies are deeply embedded and practiced by the Army in my experience. A terrific USMC After Action Review of the mission can be found here. One could also assume that a light infantry platoon with robust extraction options could have achieved this mission profile.

You may have millions of dollars invested in your training but if you are not equipped for a particular mission, don’t use that asset no matter how shiny and cool.

Point of view is so important in these films. I often think that the war fantasy movie Red Dawn from the 1980s would have been critically acclaimed by the usual government supremacist applause if it had been grainy black and white (like Battle of Algiers) in Spanish set in the steamy jungles of Central America while a brave force of Communist guerrillas battled a coalition of European invaders. John Milius, the director and writer of Red Dawn, was an unapologetic anti-communist and this set him quite apart from the collectivist rabble that made up the majority of the pod-thinking in Hollywood then and now.

Lone Survivor is a grueling war movie comprised of a tapestry of ambushes, chases and showdowns that seem to meet the formulaic demands of the genre. It gives a hat tip to the absolute stupidity of military command and control pathologies that are a regular part of the US armed forces. The modern US military is built around an antiquated Second Generation Warfare framework that gives lip service to Auftragstraktik but in reality practices a Soviet model of crushing initiative, over-reliance on “call for fire” and heavily regimented mission orders.

The movie attempts to pull the heartstrings of patriotic Americans; you know, the folks who get misty at the thought of continuing the War on the World the US has been waging since 1893 to “protect our freedoms”. It pushes all the right emotive buttons but one has to step back and change the framework. Consider this thought experiment alluded to earlier with Red Dawn: it is not Afghanistan but the American hinterland in 2015 with Federal forces battling confederation guerrillas in seceded states resisting the attempts of the central government to reestablish its stranglehold over the states. The point of view would remain the same: a group of US SEALs working to assassinate a local rebel leader in the states who is insisting on sovereignty and a divorce from the occupying authority in DC. A skilled director and screenwriter would achieve this in the same fashion Lone Survivor manipulated the audience by portraying all the bad guys as evil and not simply armed locals sick to death of central planners in a faraway capital, Kabul, forcing them to comply with alien cultures and morals imported from the West.

This has nothing to do with Islam and alleged incivility on the part of the indigenous inhabitants because beyond the abstract, that only troubles invaders who use this as a trump card to justify their own barbarism. The evil of the locals in their behavior is broadcast through the government-media lens and has a very special filter to ensure it justifies the excuse for more military misadventures. If you doubt that, examine the 21 casus belli Bushevik II used to justify the unjustifiable invasion of Iraq. Take a look at the influence warfare conducted by Rumsfeld’s Office of Special Plans on the Western opinion-makers and voter mass base.

Luttrell and his three dead companions died for nothing. His team would be joined in Valhalla by 16 other team members who were KIA in the Chinook that attempted a reinforcement of their harried position. Lives ruined and tens of millions wasted in the intense investment that is the creation of American SOF. The mission was a typical cavalcade of calamities that has many vectors of blame to include the mission profile itself and the aforementioned Soviet-style planning that is the secret and unpublished shame of American arms in the last hundred years. They suffered and some died to further the interests of the American War on the World in the new millennium which is nothing more complicated than a money-laundering operation for the military industrial complex in the West centered around the offensive war mandarins in government offices and corporate boardrooms around DC.

Pop quiz: what political affiliations and influences were in power and had ascendency in American involvement in WWI, WWII, Korea, Vietnam and most of the twentieth century? You guessed it, the Left and collectivist framework that has animated even Republicans since Teddy “Progressive” Roosevelt.

So, when you cheer or tear for the martial exploits of the US military in foreign lands, a smile beatifically passes over the face of every American president and his elected and appointed apparatchiks in the Offal Office and its tentacled reach into every political orifice in the land. War is the health of the state and especially the American variant.

I understand the almost visceral sympathy one feels for the intense tragedy of a failure of American arms but Luttrell and his confreres would be alive today if not for the enormous political and military failure that is both the Iraq and Afghanistan conflicts and the subsequent ripples that have emanated from these disasters globally. Having spent most of my adulthood in the Legions, I understand the almost sacred marriage of trust and challenge in the brotherhood but the larger picture demands we open our eyes to the true fruit of the efforts: war abroad is wrong and the only just war is one fought on your own soil.

I just spent a year in Kabul and could not cross the street to the Ministry of Defense for my daily business without an escort and full body armor and kit to amble a mere kilometer. After trillions of pilfered American tax dollars and future money leveraged on unborn US grandchildren and a dozen years, the Taliban and HQN and the hundreds of local resistance organizations are alive and well. The day the last Coalition boot leaves Afghan soil, Kabul will come under siege and fall a few weeks later. One only need examine the last year’s news for Iraq to see what a recipe for sectarian violence the hapless idiot savants in DC have brewed; a perfect storm for years of unrest.

Afghanistan is an imaginary country much like the Hussein-crafted Iraq and I daresay, the United States; demonic centrally planned nations who have yet to fall to the historical certainty of unrest, fissure, friction and break-up that is the inevitable rule of national development throughout history. I suspect the US does not entertain the creative confederation and possible break-up of these troubled states because it does not want the slightest justification for such sentiments home in North America, which is the ripest it has ever been for secession and the eventual divorce from DC from every state in the alleged union.

Lone Survivor is homage to modern American conflicts abroad in the ongoing campaign to make the world safe for unwieldy giant nation-states and the glorification of collectivism and government supremacism at every turn. Both Afghanistan and Iraq are monuments to the failure in vision when the West stood astride the ruins of the Middle East after WWI and decided to draw map lines convenient to Western interests and completely agnostic to historical ethnic and clan ecologies in the region. The match was struck and the bonfire has been burning ever since.

Sympathy for the American war machine is sympathy for the devil and rolls along hand in hand with the worst collectivist fantasies of organizing societies under the gun.

Those lads did nothing to ensure the freedom and liberty of Americans while traipsing around the Hindu Kush. Brave and resourceful they may be but agents of individual liberty they are not. Those nineteen men who perished in Operation Red Wings had mothers and fathers and wives and children who will never see them again nor share old age together.

The greatest tragedy of all may be a country that did not see that in the first place.

5 thoughts on “Luttrell Gets His Gun: The Tragedy of Armed Busybodies by Bill Buppert”