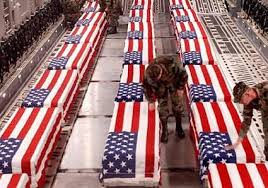 My annual homage to yet another celebration of government violence in defense of…government. -BB

“Non-intervention does not mean that nothing happens. It means that something else happens.”

Politics is a death cult and war is its high priest.

Here are some numbers to celebrate:

Among service members deployed in these conflicts, 103,792 were diagnosed with post-traumatic stress disorder (PTSD) over the period 2002 to December 2012.

Over that same period, 253,330 service members were diagnosed with a Traumatic Brain Injury (TBI) of some kind.

As a result of battle injuries in the Iraq War, 991 service members received wounds that required amputations; 797 lost major limbs, such as a leg. In Afghanistan, 724 have had to undergo amputations, with 696 losing a major limb. –

A hearty thanks to all the politicians and bureaucrats who made this government program possible.

The recent march on the monuments had the Emperor smiling beatifically as the war-worshippers provided the politician’s dream of providing popular justification for violence abroad so he could share the mem at home.

Good Gods, if I were a Martian who landed on Earth ten years ago and found myself attending government schools, to include college, and watching television for any additional cultural education,  I would not be aware of any of this.  The constant drumbeat emanating from the State is the Orwellian chorus about America making the world safe for freedom and liberty and never using force abroad except in self-defense.  The history proves otherwise.

America, next to Rome in the Western world, ranks as one of the world’s most aggressive nation states when one examines the evidence.  A country sheltered from the tempestuous and constant warring on the European continent by one ocean and the turbulence in Asia by another ocean yet it simply cannot mind its own business nor resist the temptation to maim and murder abroad for expansion of political power and control whether for mercantilism or colonial aspirations.

Nor can it be said that there is any general repulsion on the part of the enlisted men to taking part in these doings. I regret to have to say that, on the contrary, the majority of soldiers take a keen delight in them, and rush with joy to the making of this latest development of a Roman holiday.

In the path of the Washington Regiment and Battery D of the Sixth Artillery there were 1,008 dead niggers, and a great many wounded. We burned all their houses. I don’t know how many men, women, and children the Tennessee boys did kill. They would not take any prisoners.

I am now stationed in a small town in charge of twenty-five men, and have a territory of twenty miles to patrol…. At the best, this is a very rich country; and we want it. My way of getting it would be to put a regiment into a skirmish line, and blow every nigger into a nigger heaven. On Thursday, March 29, eighteen of my company killed seventy-five nigger bolo men and ten of the nigger gunners. When we find one that is not dead, we have bayonets.

You never hear of any disturbances in Northern Luzon; and the secret of its pacification is, in my opinion, the secret of pacification of the archipelago.  They never rebel in northern Luzon because there isn’t anybody there to rebel.  The country was marched over and cleaned in a most resolute manner.  The good Lord in heaven only knows the number of Filipinos that were put under ground.  Our soldiers took no prisoners, they kept no records; they simply swept the country, and wherever or whenever they could get hold of a Filipino they killed him.  The women and children were spared, and may now be noticed in disproportionate numbers in that part of the island.”

The notion that foreign wars and entanglements are wrong still emanates from a sparsely populated philosophical quarter that has no majority presence in the academy or the government–media complex.  It is a true voice in the wilderness.  That voice has one signature message:  you cannot thank a veteran for your freedom because they have actively done nothing more than endanger its very existence.  In fact, American military power abroad (and increasingly, at home) has made civilians tremendously more unsafe now than they have ever been.  The threat not only emerges from aggrieved victims of American brutality abroad but a government desperate in bad times to ensure that not one dollar of military expenditures is reduced.  America is now a national security garrison state.  Think about that the next time you take a flight.

And that hammer is coming home.

3 thoughts on “The Shame of Veterans Day: The Mass Marketing of Mass Murder by Bill Buppert”