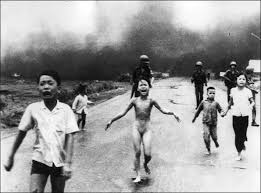 If the US is capable of anything, it is the author of an imperfect future in which the best of intentions always seems to yield bad fruit. In order to project the potential consequences of what the American defeat in Afghanistan will look like, it is instructive to reflect on the US involvement in Vietnam. History certainly does not repeat itself but it certainly rhymes over time.

Could the United States have secured a free South Vietnam?  Did the United States have all the necessary political and military capital to prosecute a major land conflict in Southeast Asia and create a self-sustaining nation neutral or beneficial to American security interests in the area?  I would suggest the United States did not and will not for the foreseeable future have the capability to answer the latter in the affirmative and therefore the answer to the former question is a definitive no.  America, despite it formidable might with no technological peer will lose.

The Vietminh in Saigon accidentally gunned down LTC A. Peter Dewey of the office of Strategic Services (OSS) in September 1945.  What is important to know from this solitary death is that Ho Chi Minh and his Vietminh regretted this and did what they could to atone. Uncle Ho had his finger on the international pulse both within the ranks of the small and large C comintern and the importance of crafting and staying on message first and consistently. Dewey would not be the first American to fall there.  He would be followed by tens of thousands of other dead and hundreds of thousands of physically and mentally injured Americans during the long American night in Vietnam that would emerge within a generation.

The North Vietnamese and its attendant unconventional legions were tough, resourceful, well-trained and consistently had their eyes on the end-state Ho Chi Minh sought – a unified ideological peninsula with like-minded neighbors that suborned all colonial influence to self-determination.

The French had a robust religious and commercial presence in Vietnam since the 17th century but it remained of minor influence due to the constant in-fighting and civil wars between Vietnamese rulers and the sheer breadth and depth of the country. In 1861, things came to a head and the French militarily invested themselves in the country and established a vigorous colony. Vietnamese resistance to the French was to maintain a low boil, robust renewal during the Japanese occupation in WWII and literally see the French kicked out of the country after the disaster in Dien Bien Phu in 1954.  The French were to suffer the same fate with eerie parallels in Algeria by 1962.Throughout its long history, the Vietnamese had bested Mongols, Chinese and the French. The Americans would be next.

Ho Chi Minh, hoping for U.S. support, confided to an OSS agent that he would welcome “a million American soldiers… but no French”.  Giap echoed that theme, telling a Hanoi crowd to regard the United States as a “good friend” because “it is a democracy without territorial ambitions” In early September, U.S. intelligence agents in Hanoi reported to Truman’s Secretary of State, James Byrnes, but the Vietnamese were “determined to maintain their independence even at the cost of their lives,” since they have nothing to lose and all to gain”.  But the United States and its wartime partners, inexorably if not deliberately, preceded to restore French rule.” [1]

This would be the other nail in the coffin for US ambition in the region.  America’s cultural intelligence for the region was near zero and the threat of a communist “domino effect” hastened decisions that would haunt American top policy makers for decades.

America had competent ground forces but they had a history of mal-adaption to new forms of warfare and they were married up to a political vacuum in Washington DC that capitalized on the American temperament to engineer a solution even when no problem was soluble in the equation.  The infamous McNamara would bring in his wunderkind who would condemn many thousands of soldiers to misery and death and never manage to erect a strategic framework that was either viable or politically sustainable.  The war was not lost at home, in the media or on the peninsula of Vietnam.  The war was lost because an outside aggressor had never defeated the Vietnamese.  The American war was lost in 1954 before a single American boot sank in Vietnamese mud. Dien Ben Phu proved that indigenous soldiers on their own turf could still defeat first-world forces supported by a sophisticated logistical infrastructure indefinitely.  Ho Chi Minh and General Giap managed to harness nationalism and communism to the native hardiness of the indigenous people in Vietnam and crate an unstoppable war machine that could absorb astonishing punishment and come out fighting on the other side.

In an interview with Bernard Fall’s widow, she relates how Dr. Fall, having witnessed both French and American incursions in the country had pinned down one of the formative problems:

“Dorothy Fall:  Probably. When Bernard traveled to Vietnam the first time, while the French were fighting, he went to see a French military man who showed him a map and said, “Well, there are just a few little Communist enclaves scattered here and there, but generally we have the countryside under control.”  But when Bernard would discuss this with his Vietnamese colleagues [at the university there], they would all laugh and say: “No, no, no!  The Communists rule that area!”

And so Bernard did something ingenious: He said, well, if the Vietnamese government is really in control, let’s see what the taxes indicated.  And so he went to the Vietnamese tax collection office in Hanoi and studied the village tax rolls and realized, “Gee, well, they’re not being paid in this village, or in that one, or in that one.  Then who are they paying taxes to?” Obviously, someone other than their French-supported national government!

Then he did the same with the schoolteachers.  Teachers in Vietnam were assigned by the central government, but he discovered that the same places that did not pay taxes also weren’t being assigned teachers from Hanoi.  So he came back and had one map of the areas the French said they controlled, and another based on the data he’d collected.  The French had a map of white with little red dots, and he had one that was practically all red.  This was in 1953, and a year later the French had been driven out!

Then, in 1957, he was in Vietnam when Ngo Dinh Diem was president, again claiming that the situation was totally under control.  But Bernard would read the paper and note that there was a village chief being killed here and one being killed there.  This was just a matter of reading the newspaper systematically!  But he would see that these men were being replaced by Communist cadres.  And again, he drew a map and showed that, indeed, the Viet Cong were infiltrating in the south.” [2]

As evidenced by post-Vietnam military adventures, the US political establishment is unaccustomed and resistant to the prosecution of long war conflicts that involve irregular warfare and unconventional conflict. While the US may have vacillated and jumped from one strategic lodestar to another, the “enemy strategy can be outlined quickly, since it was simple, concise and consistent…the opposition knew what they wanted to do they had the initiative, and they had the winning combination…Controlling and communizing all of Indochina have always been the foes overriding objectives.” [3]

Even American LTG Hal Moore saw the writing on the wall with his “tactical victory” in Ia Drang in November 1965.  He was a Francophone scholar and reader and had investigated the accounts of the French post-WWII experience in Vietnam before even stepping foot on Vietnamese soil.

America simply did not have the industrial depth or the political will to defeat the Communist invasion of South Vietnam and would never achieve the upper hand in pushing back the North much less stemming the tide south.  It was written in blood well before the American landed in force.

“But the Vietminh’s logistical accomplishments achieved in deployment of artillery and troops through the difficult terrain and the potency of rival weaponry remain a centerpiece of the history of this battle and a proud record in Hanoi’s military annals.  These artillery weapons battered “the enemy” and in March destroyed the airfields connecting their supplies and reinforcements.  General Vo Nguyen Giap, who commanded the Vietminh, summed up the ferocity of the DRV’s assaults when he asserted pointedly: “We decided to take the enemy by the throat at Dien Ben Phu.” [4]

Giap would go on to defeat the Americans over a grueling conflict to kick out yet another alien invader on the peninsula.

Since the end of WWII, American strategy in the prosecution of land conflicts still cligs to quaint anachronisms of power that have nothing to do with modern conflicts such as the seizure of capitals and the assumption that enough exposure to American ideals will win over the mass base.  Nothing could be further from the truth in Afghanistan and there are some eeries parallels between the unstoppable nature of the Communist ideal in Vietnam and the stell in the spine of Afghan resistance to both occupation by anyone and the resilience transmitted by Islamic faith.

Afghanistan will look the same.  How America characterizes the defaet; ony time will tell.