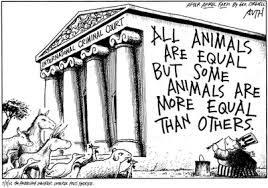 One of the reasons why our nation has prospered is that we have been able to capitalize on our individual abilities, abilities that are diverse and unequal. It’s the differences and “unequalness” among people that allows for innovation, invention, new technology, growth, prosperity and progress. To enforce equality upon the populous is not only unnatural (equality does not exist in nature), but it prevents the very prosperity we all desire, resulting in class warfare. It’s no accident. As more “equalizing and redistribution legislation” becomes the law of the land, more poverty and class warfare develop. This will continue until the populous empirically learns the hard way that the State, no matter which party is in power, is their enemy and learns to withhold their consent at the voting booth by abstaining. Most people hate monopoly power (even the non-coercive variety), but the populous gives the State the monopoly on the use of force without even a whimper. With such power over the individual, the State will use that monopoly power to enslave us until we collapse into the Orwellian dark ages or war annihilates us all. Most people know about the danger of stepping into the lion’s den or getting burned when they play with fire, but to most people these are only allegories with no relevance in their own lives. However, all voters assume a similar great danger when they step into the voting booth. They are collaborating with their own enemies who present them with lots of goodies to lure them in, but eventually make them offers they can’t refuse, “Godfather” style. To add insult to injury, the voters revere those very same enemies with donations to their elections, and name buildings and bridges after them and build statues of their likenesses in the public parks all over the land. As long as the populous values equality over freedom and relies upon the voting booth to try to establish that equality, the societal deterioration will continue, as can be seen in today’s climate of unrest, unemployment, despair and insecurity.

Some argue that it is not equality that the voters seek but equality of opportunity. There is no such thing as real equality of opportunity since we are all born unequal. Take two people, for example, Bill Gates and myself. We were born with equal “legal opportunity” but actually we were born with reality-based unequal opportunity. By birth we started out in this world with unequal opportunity by virtue of the fact that Gates was born smarter, more committed to his goals, and able to take greater risks than I. I had the same “legal opportunity” to accomplish what Gates accomplished but I failed to do so. Our inequality illustrates the difference between Gates’ accomplishments and my accomplishments. Does that make Gates an undeserving evil exploiter of us all? On the contrary, Gates’ success made life better for me as it did for everyone else on the planet. The same holds true for Henry Ford, Andrew Carnegie, John D. Rockefeller, Cornelius Vanderbilt and J.P. Morgan, most of who were born extremely poor, but with great intellectual abilities. They didn’t invent or create poverty, since poverty is a natural condition of all life. They helped cure poverty for millions of people. Where the average person sees no opportunity, these great benefactors of mankind saw opportunity and were willing to take extreme risks that most of us are not willing to take.

When one analyzes the motives of the “true believers” in “equality,” we see that what they really want is equal results, which is beyond utopian. An ideology of equal results is insane and immature, an ideology that can only be implemented by law, (at the point of a gun). The one who points the gun in fact creates immediate conflict between himself and the victim, and a multitude of conflicts have flared up right before our eyes over the past 50 years. Government means guns and the more government, the more guns and the more guns, the more conflicts. It’s no coincidence that as government has grown since WWII, we have found our country involved in external and internal conflicts at a continually increasing rate.

When one nation aims its guns at another nation it is considered an act of war. When one’s own government points its guns towards its own unarmed citizens, in the attempt to coerce equality it is just as much an act of war. At least countries at war have the ability to agree on a truce and the fighting will stop. However, within a nation, a truce is never offered since the guns of the law are forever present. They hang over the necks of all of us just waiting for someone to step out of line in order to rationalize its use. Like the Sword of Damocles we now all live with a sense of foreboding engendered by a precarious situation, especially one in which the onset of tragedy is restrained only by a delicate trigger or chance. Presently our precarious situation involves our economic system veering closer to the edge of a cliff. While this very dangerous situation continues, the legislators call for more equality and redistribution legislation, condoned and sanctioned by most of the population. The delicate trigger in this case is continuing on the same path of coercive legislation.

The equality ideology is to a nation what hurricane Sandy was to the Northeastern states and what hurricane Katrina was to New Orleans. It will annihilate whatever good that has been produced by the builders, creators, inventors, innovators and investors of the past, leaving misery in its wake—witness the attitude of laziness and desire for more free stuff and equality by the people of Greece today as Greece slips into possible oblivion. America is on the Grecian path. It’s only a matter of time.

There is no middle ground between equality and freedom. For equality to even be attempted, freedom must be sacrificed upon its alter. At its very inception, the first “equality” law had to take away the freedom of someone or coerce someone to take an action that they would not have taken if they were free to follow their own judgment. The fact that equality must be coerced proves that it defies the laws of nature. The attempt to coerce equality is the very factor that will lead to its failure. Unfortunately the damage will be done in that attempt. In the long run, if 100% freedom does reign, optimum equality will take care of itself by providing prosperity and contentment to the citizens. When the entire nation is enveloped in prosperity, security and contentment, inequality stops being an issue. We must not be fooled into thinking that we have already tried freedom and that it failed. It is not freedom that failed. It has been the absence of real 100% freedom that failed.

Since the State has had control over the education system of the nation it has been very easy for the State to misrepresent what is taught. Our schools have been teaching that we live in a “free” country and everyone seems to believe it. Like the “doublespeak” mentioned in the novel “1984”, our schools teach that our coercive political system has created and is maintaining “freedom”, thus obfuscating the true culprit in the battle between freedom and slavery. That culprit is the ideology of Statism itself.

4 thoughts on “Equality and the American Public by Norm Imberman”