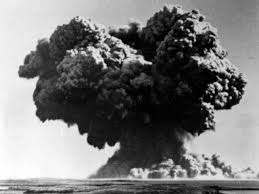 The notion of unconditional surrender for either Germany or Japan is a popular notion and it in fact extended the length of the conflict. Like all of its historical antecedents, it stiffens the spine of resistance and more so in cultures attuned to a warrior ethos. Peace entreaties from the Japanese government emerged as early as January 1945 and they were apparently ignored. It looked like this:

Specifically, the terms of the Japanese peace offers of late January 1945 were as follows:

I suspect Truman’s intended audience for the nuclear bombs was a cautionary tale for Russia since even he realized a bipolar world was emerging and he knew who the contestants were. The revisionists and mainstream historians both argued over the casualty figures proffered by the Truman administration after the war.

If you look at the annihilation of huge Japanese forces on the mainland in Russian East Asia in the Soviet-Japanese campaign in August 1945 you see the scale of conventional force dissolution the Japanese were suffering.

There are a number of revisionist challenges to the conventional interpretation and I find them compelling.

“The revisionist challenge to the traditional interpretation became a source of fierce debate after the publication of Gar Alperovitz’s book, Atomic Diplomacy, in 1965. He contended that the United States used the atomic bomb primarily for diplomatic purposes rather than for military requirements, particularly to impress and intimidate the Soviet Union in the emerging Cold War. The argument that Truman ordered the atomic bombings of Japan primarily as an anti-Soviet weapon for fighting the Cold War became a prominent, though not unanimous, feature of atomic bomb revisionism.” [2]
We have to be careful to suggest casualty figures as high as one million when even MacArthur scoffed at their accuracy.  I am not even proposing an invasion would have been strategically sound but at our level of inquiry it is incumbent upon us to always remain skeptical.

I recommend a careful reading of Walker, very instructive.
[1]  McLaughlin, John. “The Bomb Was Not Necessary.” The Cutting Edge. https://www.thecuttingedgenews.com/index.php?article=12499&pageid=16&pagename=Opinion (accessed September 21, 2012).

3 thoughts on “The Myth of Unconditional Surrender by Bill Buppert”