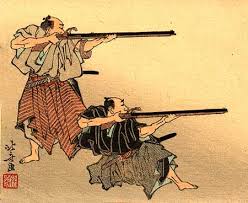 Rifleslinger runs a blog over at Art of the Rifle.  The writing is clear, intelligent and original.  He was kind enough to allow us to run this essay on our blog with this personal disclaimer from him which I wish to honor:

“While I do not consider myself anti-government or anarchistic, I respect the free exchange of ideas, and the civil manner in which ideas are expressed in the articles published here.  It is in that spirit that I humbly submit the following.”

If you’re reading this for pleasure, you’re very likely a rifleman or an aspiring rifleman (I include women in the word “rifleman” because I remember what proper English is, even though I seldom speak it). If you’re a rifleman, you might have thought about what all your hard won skill might be useful for. So have I.

The rifleman in modern society is akin to a ham radio in a smart phone world. The smart phone is quick and chock full of capabilities that are a lot more interesting in terms of the phone’s screen than of the real, physical, and interactive world. It is new, and keeping up with the latest model is a sure way to engage in what sociologists would call “conspicuous consumption”, so you can let everyone in the checkout line at the supermarket know that you can afford the latest and greatest as you text away (or whatever you do with those damn things). Your smart phone can gather all the data you need to come up with a firing solution for your precision shot in just a minute or two. You can even buy a mount for your picatinny rail on which to plant the phone (never miss a call as you ‘send it’). You can use your phone to watch movies and listen to music. You always know that if there is an emergency, or your car breaks down you don’t have to worry. You can always be aware of what’s going on everywhere, except directly around you.

The ham radio is not new or sexy. The barista at Starbucks is not likely to be impressed by the skills of an amateur radio operator. It doesn’t do a plethora of cool things. It’s pretty much a communication tool.

In the extremely unlikely event that the thin veneer of our placid and peaceful society is somehow ripped away, the cell phone network is likely to be compromised. In the event the batteries cannot be charged, the phone’s life will be measured in hours. It will then be a useless piece of garbage. Millions of smart phone owners who are totally dependent will be left jonesing for their smart fix. They will be expecting that they can get bailed out with a quick call or text. The idea that they should have found some other way out would be unfathomable to them.

Ham radios are intended to be used as a backup to regular communication in the event of an emergency. Their users think ahead on how to keep power supplied and replenished. The technology is relatively simple and robust.So it is with the rifleman.

The rifleman, like the ham radio is not the flashiest. He is probably not perceived as especially useful by most people. A male model or newscaster would appear to the common modern American to be preferable to the rifleman. But in an emergency, when most people’s reality is turned upside down, the rifleman is who everyone else will look to for guidance and leadership.

So far I have conveyed that the rifleman is someone who we hope is never needed, is not well understood by the masses, and who has a skill that seems out of date and out of place in modern society unless the worst happens, and the thin veneer of stability is worn away. Let’s examine the rifleman as he was conceived in our country to better understand him in his proper context.

When America still existed as British colonies, communities had to band together to some degree to protect themselves from the wild, and from invaders. The able bodied men were mandated to answer this call of responsibility. It was understood that although you may be asked to give up everything- your home, the well-being of your family, your livelihood, and possibly your life, it was necessary for the survival of the community that you take up arms if it was necessary. In antiquity, they called the collective body of riflemen the “militia”. This is not currently a politically correct word, and is not a productive term to use anymore. The media has undermined the meaning of this word, and turned it upside down, as they have with a great many other things.

The riflemen of old functioned not so much out of rights, but out of responsibilities. These responsibilities were to their communities. Community in those days meant that you had an extended circle of family and friends that you had to answer to for your words and deeds. Note that communities have largely been left behind in favor of mobility and privacy.

When it came time to overthrow the ruler of the original American colonies, our own Founding Fathers recognized an important principle that they later found necessary to articulate in the nation’s primary governing document: “A well regulated Militia, being necessary to the security of a free State, the right of the people to keep and bear Arms, shall not be infringed.” Obviously at that time, the rifleman was still a necessity to the security of his community, and to his burgeoning nation.

In time the wealth of the nation flourished. Consider this quote by John Adams: “I must study politics and war, that our sons may have liberty to study mathematics and philosophy. Our sons ought to study mathematics and philosophy, geography, natural history and naval architecture, navigation, commerce and agriculture in order to give their children a right to study painting, poetry, music, architecture, statuary, tapestry and porcelain.” He got his wish, but at what cost (a nation of pansies perhaps)?

As the nation flourished, a couple important things happened. First, the notion of the community began to dissolve. We became more mobile and lost the geographic bonds forged among family, friends, and neighbors. Second, we became specialists. We decided that instead of maintaining a militia of the common man, we would develop an institution of professional militia. In the case of threats outside our borders, this took the shape of a professional military. In the case of civil unrest and crime, this became the police. This makes a lot of sense because people who do a lot of something and do it frequently tend to get very good at it.

The loss of communities and the rise of specialization must be considered together. The professional militia, the military and police, no longer served the face of their family and neighbors, or answered to their own conscious. Gone was the “town meeting” style of governance from the old colonies that left every man to consider his actions by his own compass. Instead they answered to superiors and followed orders, or more significantly, they followed the culture that began to develop inside their organizations. As this occurred, the average citizen began to disassociate himself increasingly from such matters.

In the present, the average man finds himself immersed in matters related to his specialization, and then to his entertainment. The plight of another in his “community” does not compel him to act. He leaves this to the “professional”.

Not only is the average man in modern society generally unwilling to come to the aid of his community in an emergency, it is very likely that he is unable to do so. He might be able to operate a cell phone to call the “professionals” but the odds of him conveying the important information quickly and efficiently are not good. Modern people function in a state that assumes nothing bad will happen. When bad things happen, the shock that something bad and unexpected is happening induces an immediate onset of “Code Black”.

The performance of the professional can vary from community to community, and will depend largely on the culture of his organization. In some cases it works quite well. In others well it is a miserable and corrupt failure. In most cases it will likely fall somewhere in between. This professional is the most obvious and outward symbol of the government erected by the people of that jurisdiction, although the professional may not even be a member of the community in which he works. In short, the community reaps what it sows.

The rifleman, on the other hand, still cares about his community. He has not given up on his neighbor, although his neighbor largely disregards him.The dominant culture is upside down and inside out, and therefore shuns the rifleman.

The rifleman may not fit in well. He doesn’t care. The rifleman does not live in deference to contemporary fashion or relativism. He lives according to principle. He may not seem like much upon superficial inspection, but if Providence should place him in a moment of need, he will not disappoint. The problem now is that we need more like him.

1 thought on “The Rifleman’s Burden by Rifleslinger”