“The trouble with fighting for human freedom is that one spends most of one’s time defending scoundrels. For it is against scoundrels that oppressive laws are first aimed, and oppression must be stopped at the beginning if it is to be stopped at all.”
–  HL Mencken

I went to board a flight at Tucson on Monday and checked in my guns in a secure case at the ticket counter like I always do.  Usually I have to wait but they said they would page me if they needed me for anything.  I proceeded to the TSA Security Theater festivities to have my bags and body violated and was stopped by an agent from the ticket counter and asked to return.  The scan of my gun case indicated the weapon was loaded.

A loaded firearm has a round in the chamber by all gun community standards.  We are addressing the legal definition here and not the assumption that all firearms are loaded for safety purposes.  Search as I might, it was difficult to find a Federal definition for loaded but I did find this:

As typical legalese, this definition isn’t all that clear. Luckily, in 1996 the California Appellate Court ruled on the interpretation of “loaded firearm” in People v. Clark, (1996) 45 Cal. App. 4th 1147, 1152. Mr. Clark was arrested for allegedly having a loaded shotgun because, even though there were no shells in the chamber, there were shells in a compartment in the stock of the firearm. The court held that “attached in any manner to” the firearm was intended to encompass a situation where a shell or cartridge might be attached to a firearm or “loaded” for firing by some unconventional method.

The court said:  “Under the commonly understood meaning of the term “loaded,” a firearm is “loaded” when a shell or car­tridge has been placed into a position from which it can be fired; the shotgun is not “loaded” if the shell or cartridge is stored elsewhere and not yet placed in a firing position.”

This certainly makes sense because imagine the difficulty of finding how a gun is loaded if the rounds are outside the firing chamber whether in a magazine, in someone’s pocket or at your house while you are in your car.  There is no one definitive answer to the question as is the way in American jurisprudence.  But People v. Clark (1996) is now considered case law even by CA criminal code so the round must be in the chamber for the weapon to be considered loaded.

You will find most training facilities are very specific about the command of load which means a round in the chamber.  My weapon was not loaded by any conventional definition.  There was a loaded magazine in the well but no round in the chamber which apparently constitutes a loaded weapon in hoplophobic circles.  I have traveled the gun in this configuration dozens of times.   The TSA clearly state no loaded weapons and I abided by the accepted 1996 CA Appellate Court ruling.   A Glock has three safety features in it that prevent it from firing unless the trigger is pressed.  With no round in the chamber in a locked gun case, it is not possible for the firing pin to fire a round and therefore the weapon was safe in addition to the presence of other rounds in magazines secured in magazine carriers in the case with the gun per the TSA’s own regulations.  The simplest fix is to clearly state no magazines in the weapon for travel instead of this bureaucratic doublespeak that is unclear and silly.  This being modern America, the Tucson Airport police were called to file a report on a “loaded” weapon in a case.

They were very cordial, and in fact, seemed a bit embarrassed to be called for such a mundane and obtuse non-violation.  They even pointed out it was not even actionable in the state of Arizona.  The police then removed the magazine, placed it in the case and ensured no round was in the chamber.  Two TSA drones came with the cop because “they were not pleased” a loaded firearm was in the case.  I tried to explain the firearm was in an unloaded condition but it appeared I might as well be explaining quantum mechanics to a house cat.  I had recently watched Idiocracy yet again and it appeared to be casting call for the movie.  No comprehension appeared and regulations were regulations.  Much like stop signs in America, the regulation was birthed in ignorance, served no explicit purpose for safety.  It defied the common sense usage and lexicon of guns across the fruited plain.

This is not the first time this has happened and the TSA is usually fairly hostile to gun owners lawfully transporting their firearms on trips.  They simply don’t understand their own regulations and they change and interpret them with the alacrity they execute their security theater – a clown posse whose entry standards for employment are below that of fast food franchises and whose professional standards match the legendary laziness their public behavior consistently portrays.  One almost feels as if they are picking on gun owners but parents are just as despised; just watch the behavior of the TSA to child carriers of all types and the doctrinaire institutionalization of child molestation as adults in uniforms grope children in areas that all other adults would be arrested for and classified as sex offenders if convicted.

I remain free now but who knows what the future portends.  After boarding my winged cattle car, it was made clear to me that the airlines may be publicly traded and “private” but they are now wholesale creatures of the state.  Why else would threats, fines and caging of miscreants be the only way to incentivize the behavior they wish to see on aircraft while you are hostage in the fuselage once airborne.  The flight attendants are rude with a barely discernible challenge to speak out against their ill-mannered ways so one can be manacled and kidnapped at your destination when the aircraft lands.  There was even a new Orwellian droning announcement at the airport government enclave threatening arrest if you “joked” about security.  I suspect other government agencies are closely watching the success of the TSA to condition Americans in the “airport government zones” to be compliant and obedient cattle to the commands of every uniformed goon in the facility.  Imagine a private venue like a mall, car dealership or department store (all concentrations of humans in one place vulnerable to attack) being treated like Americans are at airports.  They would become ghost towns and more brick and mortar retail outlets would become anachronism in the online shopping age.  I fly because I have to but I would much prefer to drive now.

TSA achieves nothing yet expends hundreds of millions every year employing the least qualified individuals in the country.  I suspect that when the currency collapse occurs and the TSA is dissolved for lack of funds, the homeless population will balloon as these uniformed dullards are released from the no skill positions they have with the TSA.  They may find employment as actors if Mike Judge does a sequel to Idiocracy or in police departments across the nation but their employability will otherwise be in severe doubt.

John Pistole, the head of the TSA, wants to expand their charter even further and visit the grief one experiences at the airport to every transportation venue in America.  I would modify their uniforms if they are looking for suggestions.  I would want them to don black lycra or spandex jumpsuits, military helmets two sizes too small and name-tags on large one foot diameter gold discs emblazoned with the TSA logo on chains around their necks to make it easier to confirm their own identities if they happen to forget their own names during the course of their duties. This would go a long way to convince the world we are serious about national security. 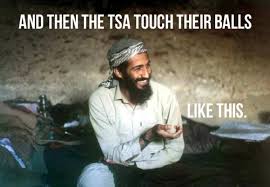 But take heart, the President promised us change and it is coming.  His policies in George Bush’s third term are doing the exact opposite of any economically rational system.  There is no more sure path to total economic and systemic destruction than the current direction the Federal government has taken.  Pistole and the whole fetid and iatrogenic TSA will be in the ash heap of history in months if not years when the whole fiscal house of cards crashes down around their ears.

“A great wave of oppressive tyranny isn’t going to strike, but rather a slow seepage of oppressive laws and regulations from within will sink the American dream of liberty”

14 thoughts on “TSA Follies with Firearms by Bill Buppert”