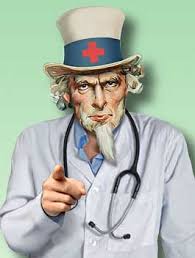 Maybe the humans that are demanding such a right be afforded to them are under the impression “their” healthcare is just “out there”. Maybe these humans just think when they come bursting through the hospital doors that whole teams of medical professionals are anxiously awaiting their arrival, free of charge, of course. Or, if not free of charge, it’ll be paid for somehow. How? Well, the Government will pay for me, damn it! It’s my human right! The medical professionals will get paid what the Government deems appropriate for services rendered, besides those rich doctors (who have spent most of their lives educating themselves) charge too much anyway. It’s time the Government stepped in and took charge of this situation; it’s gotten rather out of hand. Sadly, most of the inflated prices we see doctors charging are caused by the Government.

I want to make sure everyone understands what they are demanding when they demand such “human rights” as healthcare. Those who demand this be a right necessarily demands that another human is to be their slave. Sure, it might not be the kind of slavery we all learned about in school, chattel slavery, but it is slavery nonetheless. It is only different in degree. Those who advocate this human right believe the Government should have the power to say “you will treat this human, and this is what you will receive for compensation.” Of course, this program would be backed up by the gun, as all other Government programs are. Any doctors who are dissenters would quickly find themselves either fined, jailed or killed. All in the name of someone else’s healthcare. If this be the case, why wouldn’t the patient carry his own pistol into the doctor’s office and demand services at the barrel of his gun? Oh, that’s right, because THAT would be illegal, but there are ways to remedy this moral dilemma. Vote for it.

The American People are now on the edge of their seats anxiously awaiting the verdicts of nine lawyers with black dresses on whether this healthcare bill is Constitutional, whether the American People can be forced under the threat of law to purchase a product. Frankly, I don’t care what the Superior or the Inferior Courts have to say about it, because I don’t care about the Constitution. I see the Constitution as a blueprint for a perpetual slave machine, so it would only be fitting if the lawyers with moo-moos on figured out a way to place more shackles on us. We can expect no moral judgments to be handed down from these clowns, because they have sworn oaths to an immoral document. Any shred of reason and justice that makes its way out of the American Judicial System is purely accidental. Instead of questioning the Constitutionality of the healthcare bill, why don’t we question the morality of it? Can a man really be forced to buy something he does not want? I need food and water before I need healthcare, how long before Congress forces me to buy these things? And what shall be the punishment for not buying the things needed to support my own life? Death? In the end, if the healthcare bill is made law, and you do not comply, ultimately you will be killed. Sure, you will be fined, maybe thrown in a cage, but if resistance is continued your non-compliance will be met with lethal force. Murdered for not buying healthcare. Welcome to the world where up is down.

“Necessity is the plea for every infringement of human freedom. It is the argument of tyrants; it is the creed of slaves.”
-William Pitt the Younger

4 thoughts on “Is Healthcare a Human Right? By Chris Dates”