Publisher’s Note: I thought I would share this book review I recently did.  I also found this amusing illustrated version of The Road to Serfdom:  https://mises.org/books/TRTS/

Hayek wrote and released this book during the course of the World War II (1944-45).  He had a front row seat to the clash of the collectivist titans from the mild socialism he saw in the West to the national socialism of Germany and the communism of the Russian state.

Hayek sought to provide a comprehensive set of principles and observations illustrating why private property not only manages to be the most rational means to allocate economic resources but the one which allows the most freedom to grow and mature.  He makes a compelling argument that the smallest bureaucrat in a statist command of the economy will have much more power to influence society in a negative manner than the most successful millionaire in a free society. His primary thesis is that the power of the state will lead to slavery, misery and poverty.

Along with his colleague in the Austrian School of Economics, Ludwig von Mises, he delivered a powerful indictment of the state in two respects:  its inability to rationally behave economically and ultimately the brutal manner in which the state will ultimately treats its citizens once it has the power to tax, regulate and redistribute.  By robbing the individual citizens of property rights and collectivizing either through outright nationalization or through the more fascistic means of taxation and regulation, all citizens are reduced to slavery and serfdom.

Hayek says:  “The increasing veneration for the state, the admiration of power, and of bigness for bigness’ sake, the enthusiasm for “organization” of everything (we now call it “planning”) and that “inability to leave anything to the simple power of organic growth”…are all scarcely less marked in England now than they were in Germany.”(Hayek, 200)  It is interesting to note that outside of Germany and the USSR during the course of WWII, the United Kingdom was considered the most repressive society in the Western world.  Whether this was due to wartime secrecy considerations with the imminent invasion of Western Europe by the Allies or the creeping blanket of Fabian socialism, it is hard to ascertain.

Hayek made a very convincing case that the nexus of planning and power in state hands would lead not only to economic mischief and miscalculation but would chip away at freedoms and liberties enjoyed by citizens in the Western world.  He was very concerned that the notion that power taken from individuals and put in the hands of the collective would not destroy that power as some socialists contended but that it would enhance the power of potential oppressors to an even greater degree.

John Buchanan, the founder of the “Public Choice” economic school went on to provide some startling evidence and observations that this very thing would occur. Public Choice Theory contends that ” [a]dopting the assumption that all individuals, be they voters, politicians, or bureaucrats, are motivated more by self-interest than by public interest evokes a Madisonian perspective on the problems of democratic governance. Like that founding father of the American constitutional republic, public choice recognizes that men are not angels and focuses on the importance of the institutional rules under which people pursue their own objectives.” (Shugart II)

Both Hayek and later, Buchanan, arrived at the same conclusion that political means to manage and run an economy would ultimately lead not only to tremendous economic distortion and shortages but would make the political process vulnerable to unparalleled levels of corruption.

Hayek goes on to describe the embryonic stages of state planning as a brew of heady idealism that promptly runs into the reality of making political choices with limited time and resources and having to resort to force and coercion to finally bring the larger plans into play.

Mind you, Hayek is not of a mind that the government should entirely divorce itself from the economy.  Hayek contends  “[t]he successful use of competition as the principle of social organization precludes certain types of coercive interference with economic life, but it admits of others which sometimes may vary considerably assist its work and even requires certain kinds of government action.” (Hayek, 42)  He is concerned that the government should see to pollution, fraud and other possible negative outcomes of the market.

This would prove to be particularly galling to some of his later critics like Murray Rothbard and Walter Block who would contend that such a position simply opened the door for the softer iron fists as evidenced in countries like Sweden and the greater part of Western Europe.  The intellectual differences were mainly focused on the argument that the limiting and stripping of economic freedoms would have a deleterious effect on personal liberties and freedoms.  The discussion is still alive and well today as we see the US economy fall under the sway of more and more government intervention with the concomitant effects of recession and looming depression. Block asserts that: “in making the case against socialism, Hayek was led into making all sort of compromises with what otherwise appeared to be his own philosophical perspective—so much so, that if a system was erected on the basis of them, it would not differ too sharply from what this author explicitly opposed.” (Block, 342)

Hayek makes a very convincing argument that once the momentum for government planning and interference in the development and running of an economy runs ahead full steam, it is hard to stop.  At the same time, it becomes increasingly oppressive.  As soon as economic freedoms start to be surrender, personal and political freedoms must quickly follow.  It would be naïve to assume that bureaucracies as they grow and become more important will ultimately surrender their power or come to the conclusion that they have achieved their mission and it is time to shutter the offices and go home. In the end, the power to tax and regulate is ultimately the power to destroy.

Not only does the monopoly of force and coercion on the part of the government start to increase in size and scope with more power granted to it but the growing absence of rational price signals in a command economy start to atrophy the ability of the economy to even rationally allocate resources.  Which brings us to prices and the information signals they contain; price are merely the efficient and effective means to transmit scarcity information.  The law of supply and demand dictates that generally the prices will go up when demand remains while supplies diminish and the reverse is true.  Imagine a centrally planned economy like the old Soviet Union trying to determine how many shoes to manufacture in a certain size with no prices whatsoever except those dreamed up by a central planning committee.  Relying on this less than stellar information signal, they could go manufacturing this show…forever or however long before the centrally planned economy implodes.  In a market economy, show sales are determined by their demand.  The more popular shoes will sell and incentivize further production while slower selling shoe sales will slow down the manufacturing of them and even stop it altogether.

Hypothetically, in a centralling planned economy, buggy whips for non-existent carts and horses in an automotive economy could be happily produced into infinity because there would be no feedback mechanism, a price, to send signals to the manufacturer about what is need or desired.

Hayek contends there is even a moral dimension to the market when it comes to the husbanding of limited resources.  Prices are a vital means to do so.  Ludwig von Mises explains it far better:

“The ultimate source of the determination of prices is the value judgments of the consumers. Each individual, in buying or not buying and in selling or not selling, contributes his share to the formation of market prices. But the larger the market is, the smaller is the weight of each individual’s contribution. Thus the structure of market prices appears to the individual as a datum to which he must adjust his own conduct. What is called a price is always a relationship within an integrated system which is the composite effect of human relations.

Money prices are exchange ratios. The divisibility of money, unlimited for all practical purposes, makes it possible to determine the exchange ratios with nicety.” (Mises, 427)

In a world with mostly imperfect information, Hayek endorses a system such as prices to be as unfettered as possible to make economic transactions most effective.  He contends that the more centrally planned and politically controlled the economy, the more ineffective will be the reallocation of all economic resources from food to shoes to cars.

Hayek could straddle the middle of the 20th century and have the temerity to look in the opposite direction as his entire economics profession was looking.  Under the sway of Keynes and other command economy theorists along with the Marxian influences sweeping in form the East and the USSR, Hayek was a tiny minority in the profession waving the danger flag and predicting that the economics profession was embracing doctrine which were not only inimical to human freedom but would ride entire nations off the economic rails.  On reflection, his courage and temerity was quite impressive, for Stalin’s despoliations of his country and Mao’s genocidal campaigns under communism had not even come to light.  As a matter of fact, the entire West during WWII was enchanted and entirely supportive of Josef Stalin with many reporters coming back from Russia barely able to contain their enthusiasm for Communism and the ”next wave” of human progress.

All the central planning enthusiasts would be proved brutally wrong.

Hayek received plenty of grief from his colleagues in and out of the economics profession for daring to even hint that central planning may not be the boon to humanity the rest of them thought it to be.

Some of the predictions Hayek made in the book made George Orwell pale in comparison but turned out to be eerily prophetic of what would happen once the “planned state” would start to command more and more of the economic life of a country.

After the fall of the Wall in Berlin, Germany and the Soviet empire in 1989 and revelations from China and other communist nations after that, it became apparent that Hayek had been mild in his predictions of what would happen.  The horrific bloodshed, poverty and gross economic dislocation had been of such enormous proportions that literally tens of millions perished outside of warfare in the severely centrally planned countries during the 20th century.  The Road to Serfdom was a prophetic bellwether of horrors to come.

The West is now increasingly flirting yet again with the central planning monster as the means to extricate itself from perceived economic dislocation and disaster but policymakers would be wise to dust off their own copies of Hayek’s book and use it as a talisman against their better angels and keep the “dead hand” of government off the economies as much as they can resist the temptation.

Max Eastman sums it up best when he channeled Hayek:  “Our generation has forgotten that the system of private property is the most important guarantee of freedom. It is only because the control of the means of production is divided among many people acting independently that we as individuals can decide what to do with ourselves. When all the means of production are vested in a single hand, whether it is nominally that of ‘society’ as a whole or that of a dictator, whoever exercises this control has complete power over us. In the hands of private individuals, what is called economic power can be an instrument of coercion, but it is never control over the whole life of a person. But when economic power is centralized as an instrument of political power it creates a degree of dependence scarcely distinguishable from slavery …” (Ransom) 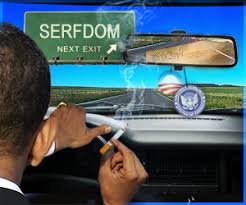 1 thought on “Hayek and the Road to Serfdom, A Book Review by Bill Buppert”