The Middle East (ME)  is on fire with revolution and rebellion against the powers that be.  There is no government in the entire area which has not abused, maimed and murdered thousands if not tens of thousands of its own subjects.  Pardon me, if I refrain from ever using the word citizens since those don’t exist on Earth.  It is simply what governments were built to do no matter how we dress them up in fancy and adoring histories.  The usual suspects in the government-media complex are coming out of the woodwork as the neoconservative-left liberal alliance blossoms to its fullest potential.  Everyone from Faux New to National Pinko Radio to the Collectivist News Network are swooning and throwing rice at the wedding.  The love letters to the Pentagon from the Obama administration could not be more fawning and flirtatious.

Through wars, bombings and the eradication of uncooperative brown people around the globe, the Child President will make the world safe for his own house brand of militant collectivism.  Amid the wreckage of the former mighty American economic engine is strewn old rusted manufacturing sectors, all home-grown means of financial power since the emergence of debt as the ONLY engine of business start-up and prosperity, and the enormous Soviet-style regulatory apparatus that has done its signal best to strangle and emasculate any innovation in the private sector.  Remember that both parties are sworn enemies of small business but maintain cozy relationships with big business.  America excels in one area and one area only, killing.  The national security state that has emerged since the end of the War to Save Josef Stalin has been the only burgeoning sector of employment since the end of the Cold War in 1989.  The Pentagon and the apparatchiks who serve it in the federal government were desperate to find a means to preserve the hyper-power military complex since its usefulness had dwindled to zero when the other Soviet state fell.   After decades of post WWII fiddling, dawdling and plotting to interfere in the domestic self-determination of hundreds of nation-states around the globe, the US had poked one too many Arab nations and earned the blowback it so richly deserved.  On 9/11 in 2001, the blow to the Pentagon and the Twin Towers in New York brought American foreign policy home and gladdened the hearts of legions of government employees and hundreds of military contractors.  A new war was on and the American national security state could now move front and center once again. 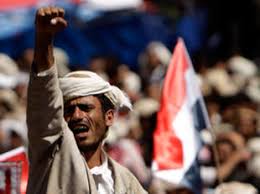 Fast forward to the present state of affairs in the ME, the hot and cold wars that the US has continued to wage in the Arab nations along with the support of dozens of brutal and corrupt regimes has metastasized into the massive web of rolling unrest, protests and rebellions.  Some are concerned with the planning involved in the protests and how many of these are simply synchronized to occur in all these nations.  Others, such as the US State Department and the endlessly creepy Hillary Clinton are more concerned with ensuring not that justice or honor is served but simply preserving the ability of the American client states and satraps to keep their people fettered and tame while we drain the Middle east of oil and keep the Israelis please with the direction of American foreign policy.  American policy in the region has been nothing more than a long and bloody trail of tears for all the people trapped in the confines of what is essentially convenient US political subsidiaries to make the West safe in their oil consumption so that the Western countries can remain virginal in exploiting their own oil reserves and reducing any free market economic incentives to find new sources of energy.

Mind you, I have no sympathy for Marxoid envirus’ who would see all the humans on the planet reduced in both population size and limited in their scientific ambition to make their lives better.  Nor do I sympathize with the collectivists on the Left who would like nothing better than to see the Middle East quite literally turn red in the communist sense.  These people have no more moral compass than a serial killer. To them, revolutions and rebellions are simply templates to bring in more government solutions which ALWAYS end badly for the people aggrieved in the first place.  You will notice for all the antiwar sentiment of the Left, they have been obscenely quiet since the Child President has occupied the WAFL (War Against Freedom and Liberty) House.

There is only one solution to what is happening in the Middle East and that is total military withdrawal and denial of foreign aid and support to any nation or government there.  In essence, the US foreign policy in the Middle East has been zero tolerance for self-determination and continued subsidy of the government thugs who practice the nastiest and most vile predations on their own populations and foreign visitors.  Unlike the government media complex who would accuse the advocacy of such a position to a “let them burn” policy, my notion is let them provide for their own governance.

Would it not be refreshing for the West to adopt a non-interference policy that they themselves would insist on if the Western nations were embroiled in their own internecine conflicts and disturbances?

Don’t hold your breath because the dirty little secret about the American economy right now is that war and conflict are the only going concerns that keep the economy afloat. If you doubt this, ask yourself a few simple questions.

Would a massive military retreat and withdrawal from all bases outside American territories back to the home country and the cashiering of millions of jobs devoted to destruction and reversed to productive work in an unfettered free market make us more or less prosperous?

Has the Western treatment of millions of Arabs and Muslims created a gargantuan cultural resentment that will manifest itself in violence for the foreseeable future?

And lastly, since we are the dominant military hyper-power on Earth; what Muslim insurgency has been defeated by the West since the end of WWII?

I will answer the last one for you.  None.