This happens to be that rare event at the New York Times – pungent and accurate reporting that brings the issues alive.  This is one of a series.  Be sure to watch the accompanying video in this article.  It is a sign of the times when an Infantry organization has to use smoke to mark the marksman’s house for air support instead of the elegance of maneuver and fire to neutralize the threat.  I am looking FM 3-21.8, Infantry Rifle Platoon and Squad at almost an inch thick on my library shelf.  The Bible for light infantry in the American armed forces.  It replaced FM 7-8 which I used to be able to put in thigh pocket on my uniform.  No longer, I could use this latest edition to augment my body armor.  While comprehensive, it could be distilled down to one page which reads “Call for Fire”. I grew up in the Army with John English’s book “On Infantry” and poring over the accounts of close combat in WWI and WWII, particularly the German lessons in Russia.

This fight will get worse if the Afghan resisters start to see that a 500m war is to their advantage and start employing the real cartridges like .308 and .303 instead of the 7.62×39 weapons they favor.  What is worse for the occupation forces is if the Afghans manage to get their hands on both the weapons and training in Western sniper technology like the .338 Lapua Magnum.

We should, of course, leave immediately and send Bush and Obama on a real apology tour all over the Afghan hinterland for the wrecking we have visited on the country.

Take notes because everything you see in these articles and video is going to be the same future footage in America in the recalcitrant and rebellious provinces that will break away from Mordor on the Potomac in the next ten years. -BB 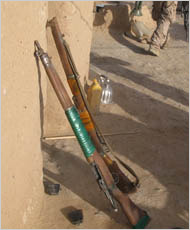 Second, how are they equipped? Kilo Company’s battlefield collections, along with reviews of recent photographs of armed Taliban fighters and information shared by an officer who gathered data from across Helmand Province, offer insights. Among the captured rifles were two variants of the Lee-Enfield rifle line. These are bolt-action rifles with design roots reaching to the late 19th century, when conventional armies favored heavier, long-barreled rifles that fired more powerful ammunition than what is predominant in military use today. 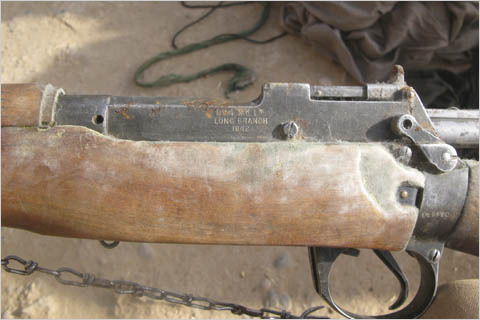 One of the rifles had been manufactured at the Long Branch arsenal in Toronto in 1942. The other was manufactured at the Government Rifle Factory in Ishapore, India; its date was not clear. Photographs of the Taliban have also shown a few of their gunmen carrying old Mosin-Nagant bolt-action rifles. These were a similar czarist (then Soviet) arm of the same era.

These rifles belong to class of weapon often referred to as “battle rifles” and differ markedly from the assault rifles in widespread circulation today. They have longer effective ranges, are less concealable and fire heavier bullets than assault rifles. The shooter loads them manually, by manipulating a bolt that ejects the spent cartridge and then slides the next cartridge into place; they have no automatic or semiautomatic features.

Battle rifles have had their champions for decades, in part because their slower rate of fire keeps ammunition consumption low and encourages disciplined aiming, but also because they were manufactured for much of the 20th century in large quantities in several countries. Their abundance meant that after the shift by most conventional forces to assault rifles — which began on a small scale in Hitler’s army and by the 1960s and 1970s was spreading through conventional armies most everywhere — the old battle rifles, which gradually fell from service, became available in huge surpluses and at inexpensive prices. They are also well suited to desert fighting or any other shooting involving open vistas, because of their longer effective ranges. Not surprisingly, Lee-Enfields were distributed to the Afghan anti-Soviet resistance by the C.I.A., via the Pakistani intelligence service, in the early 1980s. They also can still be found on arms markets. In the opening of the Marja assault, it was clear on many days as bullets passed by that these kinds of weapons, or similar ones, were in use by the Taliban. The round makes a distinctly different sound. The battlefield collections then confirmed the hunch.

The Ammunition and the Shooting 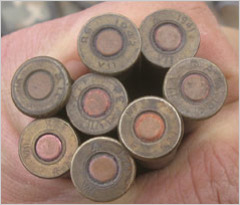 Many held bullets that were jacketed in steel – which marked them as original British World War II-production ammunition from Churchill’s time. (The British used steel for bullet jackets to save copper and zinc for other wartime uses.) A small portion of the ammunition in the sample appeared to have been older still — a few cartridges were round-nosed Mark 6 rounds, which British forces were phasing out before the First World War. 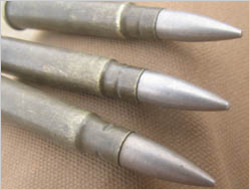 Last, several rounds were 7.62×54R cartridges, which match Russian Mosin-Nagant rifles or the SVD line, the Soviet-designed semiautomatic sniper rifles of the former Eastern bloc that were often used by insurgent snipers in Iraq. (Curiously, there are very few recent reports or images of SVD rifles in Afghanistan. They are not absent from the war. But they seem not to be widely used. This is in some ways surprising, considering the expansive distribution in Afghanistan of the standard arms of the former Eastern bloc – the AK, PK, DshK and Makarov lines, as well as 82-millimeter mortars, rocket-propelled grenades and F1 pineapple-style hand grenades.)

Fourth, the shooting itself. Often the Taliban’s snipers fired near misses, one after another, separated by 30 seconds or more. Mixed with the incoming automatic fire, the firefights in Marja would be punctuated by the occasional single round that would pass by just overheard, or thump into the soil or at a door frame or the surface of a wall beside a Marine. These rounds were attention-getting, to say the least. At times, and the video captures some of this, it appeared that more than one Taliban fighter with battle rifle was firing, which may have signaled not so much the presence of a single “true” sniper, but that some of these Taliban units had multiple fighters who preferred to carry Lee-Enfields. This might make them no different from the American grunts who prefer to carry M-14s, arguing that their larger cartridges have greater range and stopping power than the rounds fired by the M-4 and M-16 line, and thus have a real value in Afghan fighting.

But among whoever was firing on the Marines, there were several instances of skilled and accurate shooting. The officer who gathered data (and asked not to be named here) said there were times during the operation when a Taliban sniper killed a Marine, as well as instances in which Marines survived after being hit on their bullet-proof plates or, once, after a glancing shot that hit a helmet. In Kilo Company, the Marines present in several engagements also felt that at least one of the Taliban gunmen shooting at them in this particular area might have had a telescopic sight. Their feeling was that the distances were long enough that it would be hard to make shots like this with the naked eye. Moreover, the day after I recorded the video footage above, an Afghan National Army soldier was killed while walking in the open during a lull in fighting. He was felled by a single shot, at a range the Marines estimated at 500 to 700 meters, and the bullet struck his neck. Whoever made that shot was, absent extraordinary good luck, not the run-of-the-mill Taliban fighter.

What does it all mean? To gain some distance on this, broader casualty numbers are again helpful. But we’re out of space for today. Tomorrow we’ll publish data that put the snipers of Helmand Province in a fuller context. We’ll for now hint at what the statistics seem to show: Taliban fighters with traditional battle rifles have made Helmand Province more dangerous. They present an interesting phenomenon, and bear close watching. On the national level, they do not appear to mark a profound shift in the war.

That’s not to say that they do not create harrowing moments. As the video shows, Lance Cpl. Travis Vuocolo was a very lucky man.