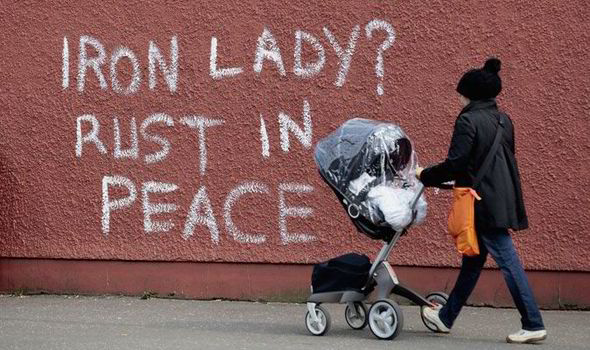 Publisher’s Note: It turns out the Amphibian is no different from any of his predecessors in the Offal Office; a mere meat-puppet for the Deep State.

The Deep State is comprised of two distinct parts: the weaponized and armed agencies among the OGAs and the DoD and the vast army of unelected bureaucrats and apparatchiks that administer everything from the tax theft system to the mountains of regulations at the Federal level and their pod-spawn analogs in the states.

it’s impossible to rule innocent men thus the vast sea of laws that protect the state as the sole victim.

A microscopic examination of some of these absurd entreaties follows:

Among the fiscal landmines hidden in the National Socialist Healthcare Act clumsily referred o as Obamacare, the 1099-K time bomb dragooned every tax Helot into a self-reporting nightmare. According to the Orcs at the IRS, in 2006 Americans underpaid their taxes by $450 billion, equal to a 17% tax noncompliance rate. In response, the IRS has pushed for more third party information reporting. Hence the 1099-K nightmare.

Every years, the tentacle monstrosity of government gets stronger and more predatory. You can’t vote your way of this. Ever.

Use this gentle pause with Hil Jong-un fading into the distance to arm up, put by food, train and learn that resistance will be fertile. In the end, your death is sure, but the government can’t win when you take as many as you can with you before you go to Valhalla. -BB I have chronicled the foul deeds and misbehavior of legions of government badged Orcs on this site. They remain the single largest and most potent threat to human liberty in the history of mankind.

This particular story happened to have so many elements of the current disaster that is the United Kingdom, I had to tease out some of the more precious threads in the story.

I’m a reluctant Anglophile and convinced that any martial victories the British military had was in spite of their best efforts and they may be the most closely aligned socioeconomic analog to the USSR in its heyday in the twentieth century in the Western world. A quaint English-speaking collectivist experiment in nonsensical Fabianism whose empire was reduced to some isolated rocks planet wide within five years of the conclusion of the War to Save Josef Stalin.

The were still rationing food and fuel in the 1950s, their nationalization of healthcare sealed their fate in 1947-48.

Now the famously disarmed nation is joining the rest of the European continent by actively importing a tailored insurgency of military age males with the added bonus of an existential disregard for personal safety on the part of the refujihadis. The news is filled with reports of intimidation, theft, rape and other ungentlemanly behavior by the British political establishment’s pet project of tolerance and diversity.

The story (in italics) with my comments:

A police helicopter swooped on a garden party after neighbours complained a song mocking Osama bin Laden’s death was being played.

The employment of a helicopter (at approx. 3k per hour) is rather curious but not surprising in this new age of over-equipped and under-informed police forces. Like cops planet-wide, they are constantly mewling about being under-gunner, under-paid and under staffed.

Officers were called out after reports the music was too loud and people were allegedly shouting anti-Islamic abuse.

Again, the loud noise was most likely a pretext to the cardinal sin of pasty Englishmen raining slurs and insults against the latest government accredited victim group.

Although in this case, they may be the most lethal victim group in Western history.

A female officer who attended the home in Cambridge pressed her ‘panic button’ after ‘taking offence’ to the track, called the ‘Bin Laden Song’.

The poor darling was frightened by the speech and called in reinforcements.

The parody, which has its own music video, uses the death of the terrorist as a reference for jokes about sex and the military.

And I say again, if hate speech and offensive speech become subject to legal sanction, freedom of speech is impossible. Sort of like saying the right to keep and bear arms in American can’t be infringed. All stop, that argument doesn’t work very well. The English have no duty to protect free speech. They could shutter newspapers tomorrow and make the British Bolshevik Corporation (BBC) the sole source of news and entertainment. “pardon the interruption for daily prayers five times a day but political correctness, you know…”

But those at the party claimed the song came on unintentionally as they were allowing tracks randomly play on YouTube.

Let’s hope a forensic examination of the machine revels a random playing of said song, then the machine itself can be jailed or destroyed.

Mark Donovan, who was at the party, was furious and denied anyone at the party had made racist comments.

But then again the mere implication that humans are different can make the nearest commie busybody fill their pants in glee and horror at the prospect of possible reeducation of a mere piker. Has Kipling been placed on the censored list along with every Victorian writer and observer?

He said: ‘This is music which is well known which was put on YouTube when Bin Laden was killed by the British and American army.

‘In the music there is no reference to colour, race, or religion.

Now this is an important tidbit, it reveals that the racism was the perception of the most likely portly British female coproach who panicked at the mere mention of the death of a jihadist.

I hope that Frank Skinner is out of the country now. Or the soundtrack to Popstar?

‘This police officer said she took offence at the song and pressed her panic button on her body cam and that’s when about ten police turned up and the police helicopter. ‘They are now investigating it as a racist crime. It is ridiculous.’ Police were called to the address at around 10pm on Thursday.

One can see how the gravity of this demanded the thugscrum of additional badged Orcs to tend to the dangerously bubbling crime scene where the sole victim is the state and it’s low information agents of mayhem.

Mr Donovan said: ‘The police threatened to arrest everyone if we didn’t hand over our karaoke machine and mobile phone.

This is funny. Your karaoke machine or your life, John Dillinger! Get on the ground!” This is so reminiscent of the escalation psychology of most American badged enforcers who think their authority trumps life even when pursuing illegal vegetation or dome of the capital crimes I discussed earlier.

So, as in all police encounters, whatever the cops report as transpiring at the scene rarely synchronizes with the truth. But their political masters universally give a get out of jail free pass to all their armed janissaries doing the bidding of the apparatchiks.

‘Our son is black, my brother and sister are black, my brother is in the American army. ‘It just seems a bit extreme to have ten police officers and helicopter attend over a song which is approved by YouTube which we never actually put on.

I’m certain this line of reasoning was way over the heads of the cops once they arrived. It flies in the face of their received wisdom that the thin black and blue line is always right.

‘It came on by the shuffle list, and now being investigated as a racial offence, the only person who took offence was the female police officer and it’s not even a racist song.

In this case as with all victimless crimes, the government agent took offense at the free speech being exercised by the party-goers and reported the incident to higher with the Monty Python like response from the badged goons.

‘Is this not a waste of police resources and public money when no crime was reported?’

How can police resources be expended if everything isn’t a crime?

A phone and a karaoke machine were seized. No arrests were made and the investigation is ongoing.

Thanks the Gods they seized the offending device. I hope their forensics lab can determine if the playlist had even more offensive music on it. Hell, one would be hard pressed to find a British punk song that is not only musically offensive but musically handicapped to begin with.

A Cambridgeshire police spokesman said: ‘Officers received a report of an alleged racial hatred incident at a property in Highdene Road.

Now mind you, it’s racial hatred to make fun of the death of a rich Saudi prince turned Sunni Salafist Wahhabist Jihadist but one can march through the streets of London and other metropolitan shit-pits in England and sing the joys of Sharia, jihad, female mutilation, abuse of woman and death to the West but don’t sing a song that parodies the death of UBL.

‘We had a report from a member of the public that alleged racist comments were being made.

It will be interesting to see what stand-up citizen informed on their neighbors to report such heinous crimes.

‘Officers are investigating an alleged incident of incitement of racial hatred.’

But every variety of government propaganda and Islamic supremacist speech in England is permitted.

Pathetic and simply an indicator that the island kingdom is destined to become a vacation spot for the weary desert kingdoms who want to escape the heat.

Bernard Lewis is right. Bets are even on what Western European country will be the first to have a Muslim voting majority and they will certainly lose in the fertility race in the next three generations.

England is simply too hoplophobic and emasculated to survive this insurgency.

They will lose and the politicians will be surprised when they go to their future maters to brag about tolerance, diversity efforts and bending over to alternative views of barbarism and offered three choices.

None will choose death. Political careers and moral cowardice go hand in hand.

That time has passed.

The United Kingdom is a signal warning to others, pay attention.

They are a dead man walking in the West.

And make the surrender of all your weapons very expensive to any wolf who comes to the door.